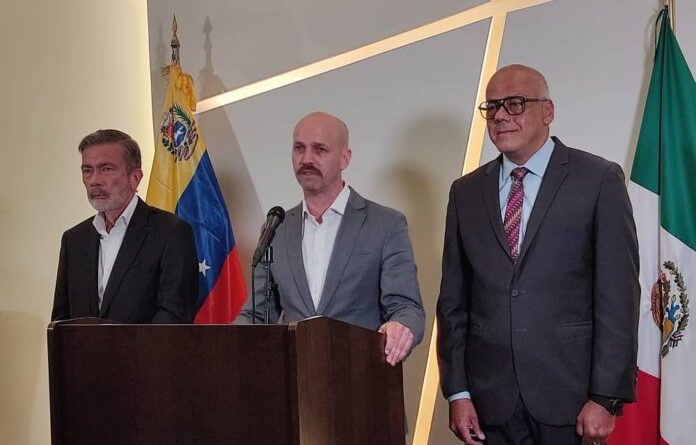 On Monday, September 27, the third phase of the Venezuelan national dialogue between the Venezuelan government and the opposition Unitary Platform, held in Mexico City, ended with a decision to establish consultation mechanisms amongst the diverse socio-political sectors of Venezuela and of other countries.

After the closing of the round of meetings that took place from September 25 to 27, Dag Nylander, spokesperson for the mediator team of the Kingdom of Norway, presented a joint statement with the Venezuelan government and opposition delegations, reaffirming the agenda established in the previously signed Memorandum of Understanding.

Nylander stated that “the various working groups held joint meetings, where they adopted positions in search for solutions to the challenges in social, economic and political matters.”

RELATED CONTENT: What Happened to the Dialogue in Mexico? Blyde Published the Following Letter

Nylander also highlighted that the representatives of both the Venezuelan government and the right-wing opposition expressed condemnation over the recent acts of xenophobia and violence perpetrated against Venezuelan migrants in the Chilean town of Iquique.

Norway stresses on its impartiality
Nylander, in his statement to the media, confirmed that the dialogue facilitating team will maintain and demonstrate strict impartiality in its dealings with all the concerned parties, according to the established guidelines.

The Norwegian representative regretted that the statement issued a few days ago at the UN, by outgoing Prime Minister of Norway, Erna Solberg, negatively affected Norway’s position in the Mexico Talks. However, after the Venezuelan government declared that the impasse had been overcome, the talks advanced towards the third phase.

Moreover, the dialogue sessions, that culminated on Monday, September 27, also focused on developing a gender approach, both for future rounds of dialogue and for the documents that may be signed in future. The dialogues also proposed to specify inclusive mechanisms to guarantee the participation of spokespersons from diverse social movements that represent the plurality of Venezuelan society.