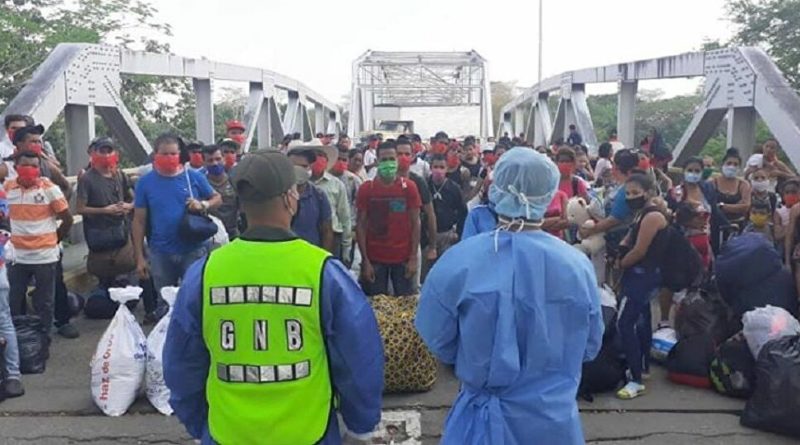 At least 17,000 Venezuelan migrants have returned home since the start of the COVID-19 pandemic. Many return with little and upon arrival find a free comprehensive care system provided by the State that allows them to carry out the mandatory quarantine on arrival until they are taken -for free- to their places of origin.

One of the first measures that countries took in the face of the COVID-19 pandemic was to close the air, sea and land borders. In the case of Venezuela, it was an early decision that, together with the quarantine and mass screening, achieved positive results to contain the expansion of the outbreak and flatten the curve.

The closure of borders confronted the government with a particular complication: the situation of Venezuelan migrants who, in the face of the pandemic, began to return to the country by land in view of the difficult situations in the countries where they had settled.

“Some left with bags and suitcases and returned with their clothes in sacks,” José María Romero, mayor of the José Antonio Páez municipality, in the Apure state, border with Colombia, tells Sputnik.

“Groups of between 80 and 400 people have been arriving gradually, without ceasing any day, and to date 3,869 Venezuelans have arrived at the Apure border,” says Romero, who every day goes to the José Antonio Páez bridge that connects Venezuela and Colombia separated by the Arauca river.

In Apure, the quarantine began on March 16, a day earlier than in other parts of the country, because one of the first cases of COVID-19 was detected there, the first and only one so far in the state.

The first days “were from makeshift shelters.” The central orientation of the national government was that “it was time to receive the fellow citizens across the border”, so an organizational scheme began to be drawn up, with the necessary sanitary measures, to receive those who entered.

“We started by complying with the minimum protocol that the World Health Organization had made public, which has to do with disinfection, a medical check-up, the interview to perceive symptoms, to then register them, take them to the shelters, guarantee them food, medical care and quarantine (for free).”

“Welcome to Venezuela,” Romero says to those who arrive at the border. He, along with a member of the Bolivarian National Armed Force, explains to the new group what the protocol will be like upon entering the country, step by step.

First, they are disinfected, then their identity, legal, criminal and documentation status are verified, and they are inspected by doctors to see if they have symptoms of COVID-19.

From there the roads diverge: those with symptoms are separated from the group and transported to a Comprehensive Diagnosis Center to be treated, the rest are transferred to the shelters that, with the passing of the days, have become what it is called Comprehensive Social Service Points (PASI).

The PASI are the spaces where those who must be quarantined are housed, fed and cared for. They operate in schools, universities and hotels, and each new group that arrives must remain isolated from the previous group or from the next group to arrive. There a rapid test of the COVID-19 is carried out.

“The first 24 hours are organizational, and after 72 hours the discomfort begins to emerge, some people are very aware, but many do not understand what a quarantine means, a pandemic, what the conditions of a municipality that did not expect such a number of people are,” explains the mayor of the Páez municipality.

The government’s response includes, after the 14 days have passed, sending people back to their states within Venezuela. Given the number of people and the limitations, in some cases the quarantine is carried out in two parts: at the border PASI and then at the destination of the people.

The municipality, together with the governorate, guarantee return transportation. A second test is carried out before they travel to their destination and they are issued a movement permit. Thus, from the time they set foot in Venezuela until they reach their homes, everything is entirely covered free of charge by the Venezuelan government.

To date, 1,637 people have been sent from the Páez municipality back to their homes and 2,300 are sheltering.

Back to the country

“Almost everyone arrives expressing joy like every human being who comes to their homeland, with momentary joy as you cross the Venezuelan border, you step on territory,” says the mayor.

According to the data of those who have entered through the Apure border, 90% have returned from Colombia, while the remaining centrally from Ecuador and Peru.

“80% are working class, with very low resources, who came with less than what they left, people who worked two jobs there, served in a house and were a peddler or farm manager, on a estate. 20% are from the lower middle class, we have not seen an upper middle class person that has passed through the international bridge.”

The destinations within the country are varied: many return to states such as Apure, Barinas, Portuguesa, Carabobo, Miranda, Lara or the city of Caracas, generally using the same point of entry into the country as they employed on the way out.

According to José María Romero, there are several reasons to explain why they return. First, the pandemic emergency, which is both of health and economic:

“They know that there are no public services in those countries, and if they do not have a job, as indeed they were left without a job, because if they suffer the pandemic they will not have any support, then it would be better to be in Venezuela.”

Secondly, that when they return they are in family, “and not only by blood, but culturally, as usual, to be in another country suffering, I better go back to my homeland.”

Finally, the mayor points out the disappointment, “much disillusionment about everything they were told was there, and they return to Venezuela for free electric service, medical care, education.” Many have been victims of discrimination, labor abuse, mistreatment, a situation that was exacerbated by the pandemic.

However, the situation of return is complex, “the majority of those who are returning come with trauma”, due to the experience of difficulties in the emigration process, conditions of stay outside the country and the return itself.

“The first days are euphoria, but then when they feel in Venezuela they begin to manifest the symptoms of the Venezuelan poisoned by the opposition media,” he analyzes. And with the media, there is the country’s economic situation, marked by the aforementioned possibilities, but also by strong difficulties such as insufficient regulated wages, bonuses, or speculation around the dollar and prices.

Venezuelan emigration has been one of the main workhorses of the opposition, to propagandize the existence of a humanitarian crisis in the country. The return of thousands of migrants, more than 17,000 to date, and the difficulty of their travel conditions to reach the border, has revealed that the concern was more of a media and financial operation than anything else.

Indeed, to help Venezuelan migrants abroad, millions of dollars have been approved. Only the United States, for example, claims to have provided since 2017 “more than $ 467 million in humanitarian assistance and development to support Venezuelans abroad who have fled the crisis and communities throughout the region that receive them.”

The question that emerged was: where is the money? The lack of a clear explanation on the part of the opposition Juan Guaidó, and the claim of not having funds, brought back to the table the recurring suspicion of a mismanagement of the money spent, as happened previously, for example, when he had attempted to force the entry of “humanitarian aid” from Colombia on February 23, 2019.

The return started by the pandemic continues day after day: to date, around 17,000 people have returned to the borders of Apure, Táchira and Zulia. As in the entire fight against COVID-19, the government has put in place a structure with positive results in order to contain, prevent, and then distribute thousands of migrants state by state.

Many of the economic reasons why the majority left the country are still present – with its mutations and, therefore, one of the main challenges lies in stabilizing the economy, which is precisely one of the elements that has again become very difficult in these last days.

The pandemic in Venezuela is combined with a North American blockade, the attempt to create a crisis an overthrow President Maduro. Those who returned to the country find a response from the state that does not exist elsewhere. Now the reinstatement begins in the country that was left, and this time, in quarantine.