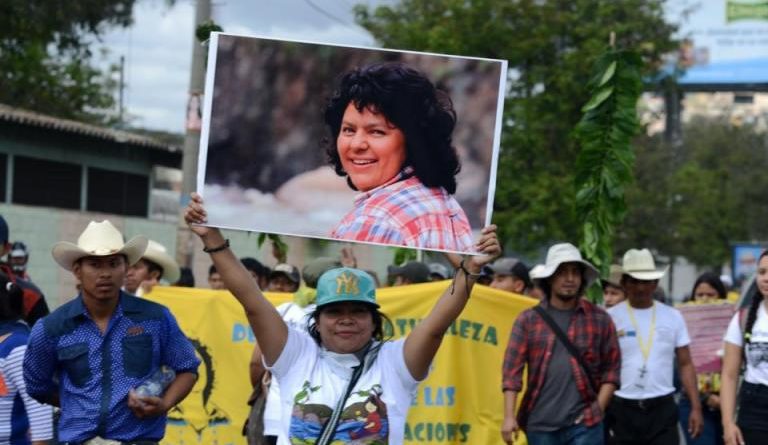 Today marks four years since the assassination of Honduran indigenous leader and environmentalist Berta Caceres. To commemorate the occasion and reaffirm that Caceres continues to live in the memory and actions of her people, in the “imaginary of resistance”, Pagina/12 interviewed her daughter and successor Bertha Zuñiga, the current General Coordinator of the Civic Council of Popular and Indigenous Organizations of Honduras (COPINH), who tells how the cause is going and how people are living in the communities and in the country, in addition to what it means for her to hold the position her mother had.

It’s the fourth anniversary of what people call “Berta’s planting”. I’d like to start with that idea, the seed that goes back to the land.

Berta Caceres was such a significant figure for the Lenca people, for the Honduran people, that even though a criminal act was committed against her life, she is always called upon in territorial disputes, in the imaginary of resistance, in the need to transform the country because of the conditions of militarization, of entrepreneurial plundering, of corruption, of generalized violence. We also believe that commemorating her cannot be determined by those who killed her, who are guilty. They cannot impose a death on us, which they tried to do by taking her away from us. This is about saying that Berta will continue springing up in many struggles, in the new generations, in women’s struggles, which are so urgent and have been showing a lot of support. That’s what Berta Caceres’ planting means for us.

– The masterminds of her murder were never identified by the justice system. How is the cause going?

We’ve seen that the legal road is beginning to close. We see little possibility of reaching comprehensive justice. Impunity is going to last a while. It’s going to fall apart somewhere along the way but in other political conditions that aren’t present now. So, we’ve learned from different peoples how to innovate in our legal, political and mobilization strategies. We must focus on preventing new crimes from being committed, on continuing to defend the rights of our communities, the right to free, prior and informed consultation, which is being threatened. And to see how to confront the extractivist model of exploitation in a stronger way because it continues to advance. There we feel that this murder, which somehow should have contributed to change the country’s structural conditions, is not working. The control of the people is advancing through the control of the water. Our work is against privatization projects given the shortage that is being felt in many places. Dams, the use of water for mining, large tourism projects, limitations on artisanal fishing and the promotion of industrial fishing. So many things are going on around the issue of water.

– What is the state of the dam construction and what is the situation in the communities?

The concession is on hold. We continue demanding that the Agua Zarca hydroelectric project, which has a 50-year operating license, be cancelled. The State has done nothing to take away the concession and we consider this to be a very important symbolic act. On the other hand, all the conditions of rupture of the social fabric remain in place. Nothing has been done regarding reparation to the community that has been affected, not only by Berta’s murder but by others. COPINH is constantly denouncing the attacks on the people who are recovering the land that was illegally sold to the dam company DESA. The Central American Bank for Economic Integration can claim the concession as its own and restart the project. This is a latent risk and we regret that the State only pretends that justice is served by sentencing the perpetrators of the crime. What they call clean energy is a very lucrative business, in which the private businesses are participating and for which there is actually a war against many indigenous, peasant communities.

– In this context, the Law on Prior Consultation that you mentioned is very important.

This law seeks to regulate the Right to Prior, Free and Informed Consultation established in Convention 169 of the International Labor Organization (ILO), but with the aim of taking away the decision from the communities in the territories because today they represent the greatest obstacle to national and transnational investments. For us, this is like spitting on Berta Caceres’ memory and it means legalizing the looting, the plundering, and to install and multiply that violence of Rio Blanco by a lot. We are creating alliances among populations to face this situation but we understand the unfavorable correlation of forces that there is today in the National Congress and in the entire institutionality of this government.

– How do you feel about holding the post of General Coordinator that your mother had?

– It’s a challenge to assume a position like this in an organization that has suffered perhaps a devastating blow. Berta was not only its coordinator but she was a strategist, a person who meant a lot to the Lenca communities. Her murder was an attack against COPINH and it did not start or finish there. We have faced a lot of criminalization for continuing to defend the territories. Fortunately, there has been a collective effort to get the organization going from the communities recommitting to their struggle. It’s hard, of course. We are now a group of very active people and we always ask ourselves how she did it. Because she did everything that we do divided among ten or twelve people. I admire her more every day, not only given the amount of work she did but also because of her intelligence, her clarity of direction and her cleverness. She always said that people without cleverness cannot fight their struggles. It is important to learn from the collective struggles, from the memory of the people, from their spirituality. This is the greatest challenge I’ve assumed in my life. I believe that without the collective commitment, without the support, not only at work, but also the human and emotional, that many women and my colleagues in my village have given me, it would be basically impossible without that.

– How do you look at the future when the present is such an unequal correlation of forces?

The situation in Honduras is terrible. Since the coup d’état, things have happened that we never imagined could happen. They have introduced new laws legalizing persecution, militarization, corruption and impunity. I have the advantage of travelling to many different communities in different parts of the territory and I see a lot of hope, a lot of conviction from the people. I feel that Berta Caceres’ dream has not completely vanished. So as long as there are people willing to fight, we will keep going. We know what we need to do in the next period. We must organize ourselves above all and to dialogue knowing that this is an anti-systemic, integral fight. The challenge is to build and to try to rebuild ourselves, because there are also organizational vices, there are quarrels amongst the processes. If we don’t learn, we’re going to stay in a vicious circle. I believe that we must broaden the struggle, do a lot of educational and social work in all aspects. And from there, we will achieve that refoundational dream to transform this country.