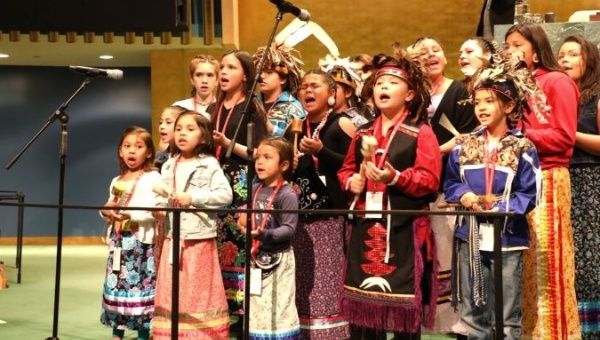 Vice-chair of the United Nations Permanent Forum on Indigenous Issues (UNPFII), Anne Nuorgam, highlighted that Indigenous children are “inextricably linked to their lands, territories and natural resources” and should be encouraged to connect to their communities and cultures.

The U.N. official noted that 2019 is the International Year of Indigenous Languages and added that “we have to celebrate our languages, but also take concrete action to preserve them and save those on the verge of extinction.”

The vice chair said studies show that children learn best in their native languages and should – according to Article 14 of the U.N. Declaration on the Rights of Indigenous Peoples (UNDRIP) – be educated in their own languages.

“However, this needs financial and technical support from Member States and the U.N. System”, Nuorgam explained at the Eighteenth Session of UNPFII which runs from April 22 to May 3.

“This enables us to protect our traditional knowledge.”

‘Let us honor the indigenous peoples who tirelessly fight for their rights and futures. Many here have traveled very far. Let us make this session meaningful for you and your peoples’

General Assembly President Maria Fernanda Espinosa indicated that there were several implementation challenges and that the world has a “historic debt with the Indigenous peoples.”

Nuorgam, who is also a member of Finland’s Saami Parliament and head of the Saami Council’s Human Rights Unit, further stated that the Forum provides an opportunity to share innovations and practices that have been developed in Indigenous communities “over centuries and millennia.”

“We’re working on creating resources, books and knowledge in the Dene language,” Janvier said. “We teach the younger generation land-based teachings – making fire, offering tobacco, trapping, hunting, fishing on the land – and that’s how we work on revitalizing the language.”

Vice-chair Nuorgam also took the opportunity to draw attention to difficulties being faced by Indigenous women, pointing out that while women are integral for addressing poverty and hunger, they face structural discrimination and violence.

“These topics are of central importance to Indigenous peoples and the attainment of their human rights”, Vice-President (VP) of the Economic and Social Council (ECOSOC) Valentin Rybakov said while addressing the Forum. “Along with recognition comes the need to acknowledge the source, ownership and protection of traditional knowledge.”

Rybakov disclosed several activities which will be launched to support the Sustainable Development Goals (SDGs).

The ECOSOC VP announced the first SDG Summit for State heads in Sept. to review six of the SDGs, including education equality, economic growth and combating climate change.

The 16 independent experts of the Forum comprise eight nominated by U.N. Member States and others by Indigenous organizations globally.

Indigenous peoples live in some 90 countries, represent 5,000 different cultures and speak a majority of the world’s estimated 6,700 languages.