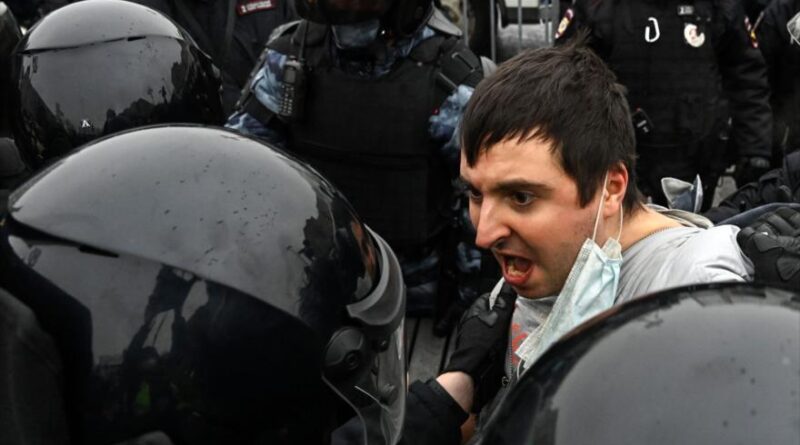 How did the US machine begin to incite unauthorized protests in Russia, following the arrest of opposition leader Alexei Navalny?

A day before the demonstrations on Saturday, the US embassy in the Russian capital Moscow, supported protesters demanding Navalny’s freedom, publishing on its website the exact date and place of the protests in Russia’s main cities in an alleged “alert” to US citizens that looked more like an invitation.

In a provocative message, the US embassy also spread information about a “march towards the Kremlin” in an attempt to encourage the disgruntled to take the seat of the Russian Presidency, in contrast to their indignation when right-wingers stormed the US capitol and provoked five deaths.

In addition to the itinerary, on the same day that the protests took place (January 23), the spokesperson for the US diplomatic mission, Rebecca Ross, expressed on Twitter her support for the “right of all people to peaceful protest and freedom of expression,” and denounced the“ steps ”of the Russian authorities to“ suppress those rights.”

In a second message, the diplomat accused Russia of a “concerted campaign” to “suppress freedom of expression and peaceful assembly” which, in her opinion, was “continues years of Russia tightening restrictions, repressive actions against civil society, independent media, political opposition.”

In a statement, Ned Price, the spokesperson for the Secretary of the State Department, also repeated this type of rhetoric against Russia.

The media machinery and the distortion of reality

The spokesperson for the Russian Foreign Ministry, Maria Zakharova, warned on Monday that Russia will study the behavior of large US internet platforms when spreading false news about unauthorized protests.

Fake news is spreading on the internet about the murder of a person during an illegal protest in Russia, local channel REN TV reported .

For example, on social media networks and messengers a photo of a man with a bandaged nose in a hospital has been circulating with the phrase “the oppositionist was brutally killed,” and claiming that the man died from his wounds in a Moscow clinic.

However, the image is actually of Ukrainian streamer Vitaliy Tsal. The photo was taken at the hospital last June, when he had a nose job and posted about it on Instagram.

Earlier on Sunday, it was reported that all those injured during Saturday’s unauthorized actions were discharged from Moscow hospitals.

US double standards
On Sunday, the spokesperson for the Russian Presidency, Dmitri Peskov, denounced the US double standards, comparing the protests in Russia to the assault on the US Congress by supporters of former US President Donald Trump on January 6.

Peskov asserted that if the Russian embassy had acted in the same way during the assault on the US Capitol, surely “it would have caused some kind of unrest in Washington.”

The Russian Chancellery denounced the US embassy for running “interference” to encourage Russian protesters while in the case of the Capitol Russia didn’t encourage US citizens to protest.

This Monday, the Russian Foreign Ministry has summoned the US ambassador to Moscow, John Sullivan, to express its disappointment at the embassy’s support of illegal demonstrations.

Navalny was detained on 18 January at passport control in Sheremetyevo Airport , shortly after arriving in Moscow from Germany.

Russian President Vladimir Putin has accused the US Secret Services of supporting Navalny, while also anticipating Washington’s attempts to interfere in the Russian legislative elections next September.