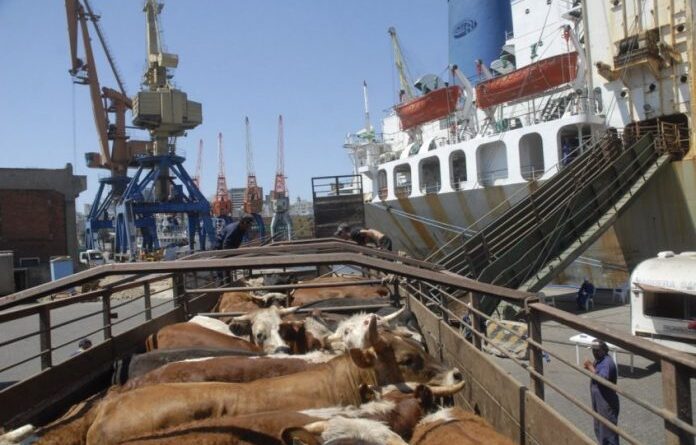 The president of the republic, Nicolás Maduro, announced this Wednesday that the country began exporting live cattle to the Republic of Iraq with 1,600,000 kilos, represented in 3,700 animals from the states: Apure, Guárico, Portuguesa, Barinas, Cojedes and Aragua.

During a working meeting broadcasted by VTV, the head of state announced that these exports had not been achieved in the country for more than 120 years.

“Since 2013, aphtose fever has been absent throughout the national territory, technically eradicated, so we can work with cattle without problem,” he said.

He called for, not a fictitious economy, but a real one to be built with exports. “We cannot build fictitious, paper economies, we have to build real, true economies, produce what the people need and build a new export economy,” Maduro added.

Starving Venezuelans? The Minister of Agriculture of #Venezuela W.C. Soteldo celebrates the first *export* of bovine livestock. A once colonised economy based on oil rent and dependant on food imports is now able to farm millions of animals. Also thanks to the US sanctions https://t.co/qqZRcT4DJl pic.twitter.com/sQ9eoKEl3p

The president also reported that he has already authorized the export of up to 30% of the products, to replace investments and continue producing for the country, money that will be reversed through the payment of taxes and investments in the country in education and health, among other sectors.

“I have legally authorized the export of up to 30% of the products. We are going to turn Venezuela into an exporting country,” he said on television.

He added that Venezuela has the fourth largest cattle herd in South America, after Brazil, Argentina and Colombia, he said.

RELATED CONTENT: “I Understand the Indignation, but I Want Peace”: President Maduro on the Pardon – European Union’s Borrell Welcomes it

For his part, the Minister for Productive Agriculture and Lands, Wilmar Castro Soteldo announced that Venezuela has resumed the export of cattle, the first since the end of the 19th century, with a multi-tasked team.

During the production event, the head of state announced that Venezuela has exported more than 40 thousand tons of marine species so far in 2020, in addition to currently starting the export of 24 tons of Tahalí in alliance with the MJM CA Corporation, a company from the private sector.

It is a product caught in Venezuela and processed by the Ministry for Fisheries and Aquaculture in alliance with the private sector.

Through this alliance, a total effective export has been achieved for the first semester 2020 of 22,530 tons, from the states of Miranda, Anzoátegui, Falcón, La Guaira and Zulia.

The species to be exported in this alliance are shrimp, crab, curvina baldric, guanapo and snapper that will go to Thailand, Korea, Holland, the United States, Spain, China and France.

During the event, the Minister of Tourism and Foreign Trade, Felix Plasencia, explained that the country is exporting to Asian markets and demonstrating that Venezuela can export to the world.