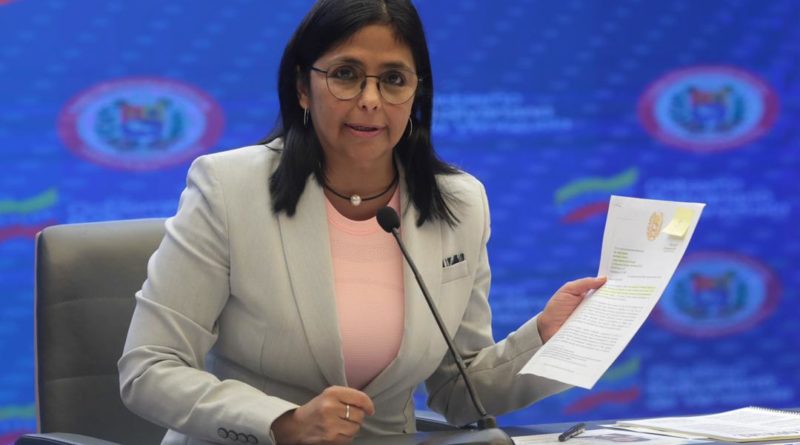 Rodríguez added that “in a period of 2 years,” the current president of the World Bank, formerly a US official,” sanctioned more than 70 officials and institutions of Venezuela,” which, in her opinion, reveals that this plan is prior to January 2019, when Guaidó proclaimed himself as interim president.

“The Guaidó Procurator’s Office has not existed, it has no officials, it is only a criminal corporation that loots Venezuelan assets. The interest that the Citgo company earns has been deposited in Guaidó’s accounts,” explained the vice president.

And she added: “Do not believe that our financial assets that have been frozen are frozen in accounts. Many of them have been transferred to the US Federal Reserve.”

“José Ignacio Hernández created an unlawful device to justify taking everything from Venezuela, however it may be. This anti-political plan by Guaidó and Leopoldo López has never sought to defend Venezuela. They defend the United States interests,” she said.

“José Hernández was a lawyer for Crystallex, a Canadian mining company, he participated in the Venezuelan trial against Crystallex, how can he represent the interests of Venezuela?” she added.

Both the Canadian company Crystallex and the US company ConocoPhillips have filed lawsuits with the court of the International Center for Settlement of Investment Disputes ( ICSID, a Washington-based institution of the World Bank ) in order for Venezuela to pay them millions in compensation for alleged unfulfilled contracts. In the case of Crystallex, it would be a compensation of 1.2 billion dollars for the Las Cristinas gold mine case, while in the case of Conoco Phillips, it would be a compensation of 33 million dollars. In this regard, a US court authorized the confiscation of the shares of the Citgo company to pay compensation.

RELATED CONTEN: Trump Diverted $600 Million Stolen From Venezuelans for the Wall with Mexico

On the other hand, Rodríguez pointed out that Ricardo Ramos D’Agostino, son of opposition deputy Henry Ramos Allup, “is also part of the conspiracy to steal resources from PDVSA”, since together with businessman Francisco Murillo, they were accused of leaking internal information from PDVSA to foreign oil companies. Both were defended by the same lawyer, José Ignacio Hernández.

“We have requested the Attorney General of the Republic (Tarek William Saab) to initiate the pertinent investigations in order to determine responsibilities and the attorney will present an action before the Supreme Court of Justice so that from the civil point of view, the title of lawyer will be withdrawn from this scammer,” she said.

The vice president stressed that in Venezuela the General Prosecutor is Reinaldo Muñoz, and he is the one who represents the interests of the country, the judicial and extrajudicial defense at the international level.

“Juan Guaidó, head of this gang of criminals, and José Ignacio Hernández: have no doubt that justice will come to you,” said the vice president, who assured that “Bolton was right when he said that the supposed recognition of Juan Guaidó only had one purpose: to steal, defraud, extort and usurp.”