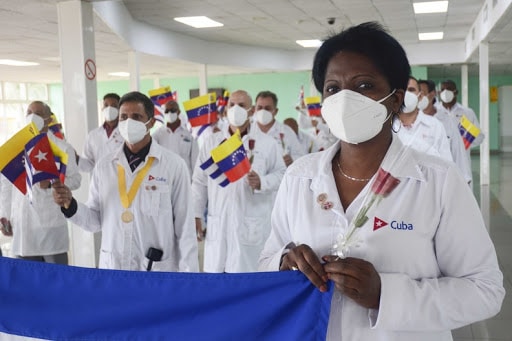 This Tuesday, by a unanimous vote of the 277 deputies making up the Venezuelan National Assembly (AN), the agreement to support the nomination of the international contingent of doctors specialized in disaster situations and serious epidemics—the Henry Reeve Brigade—before the Nobel Peace Prize Committee  and Parliament of Norway was approved.

This agreement, whereby Venezuelan parliamentarians urge the selection of this brigade of Cuban doctors for the Nobel Peace Prize, was presented by Deputy Tania Díaz, who highlighted the virtues and merits accumulated by this health brigade that has been deployed in more from 80 countries—including Venezuela—and tackled diseases such as malaria, smallpox and now COVID-19.

RELATED CONTENT: Bolivarian Revolution in the Long Arc of Imperialism

“The Henry Reeve International Medical Brigade is a beautiful gesture of genuine proletarian internationalism, organized and financed by the humble Cuban people who understood it was a sin not to help their brothers in 2005, who suffered the tragedy of Hurricane Katrina in the United States,” she recalled.

For his part, deputy Luis Romero, on behalf of the opposition group, indicated his support for this agreement in recognition of the humanitarian work of this contingent of Cuban doctors while also asking that the work of Venezuelan health personnel for the battle they are waging daily against COVID-19 be recognized, “even putting their lives at risk and some giving in to this fight.”

RELATED CONTENT: Piedad Córdoba Apologizes to Cuba on Behalf of the Colombian People for the Attitude of Iván Duque (Letter)

For his part, deputy Pedro Infante intervened to support the request of his partner Luis Romero and argued for the heroism of Venezuelan doctors and nurses to be recognized by the government and people of Venezuela.

He also highlighted the contributions of Cuban medical brigades, still working in the country as part of the Barrio Adentro Mission, towards saving lives in Venezuela.