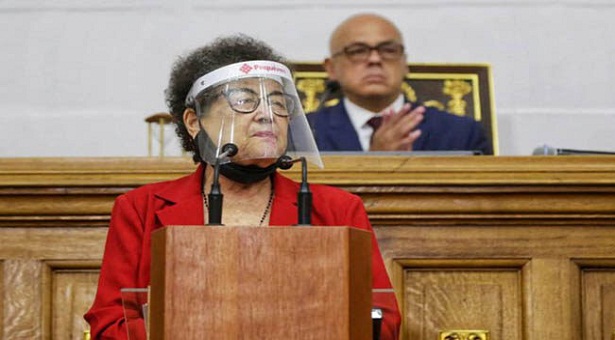 This Tuesday, March 9, one day after the celebration of International Women’s Day, the Venezuelan National Assembly (AN) paid tribute to Venezuelan women for their enormous qualities of resistance, courage, commitment, dedication and tireless struggle, especially in the extremely difficult times that they face. As Venezuela confronts an economic blockade and coercive measures, it’s time for the country to move decisively forward.

The main speaker was a consistent and historic fighter for women’s rights, Congresswoman and long standing feminist fighter María León, who exalted the Chavista legacy: “Commander Hugo Chávez was the first world leader to declare himself a feminist and he paved a path of vindication and inclusion.”

The head of the Ministry of Popular Power for Women and Gender Equality also praised the opportunities granted: “I am proud of the women, of what we have collectively achieved. My words, my message today is also for men, I am grateful that you accept our struggle as your own. The struggle of Bolívar and Chávez.”

The AN paid tribute to true heroines who have endured the worst attacks to maintain the unwavering fight for Venezuela’s stability.

Historical inclusion
The deputies who spoke pointed at the enormous victories achieved but also outlined the new challenges. Venezuela must identify the flaws within the law and the system to correct them and provide greater inclusion, they outlined.

Deputy María León proposes to form a special commission to study how to eradicate machismo from Venezuelan society. The day will come when we declare Venezuela as a territory free of [gender] violence 😍 https://t.co/IU2rX18amt

For her part, Vanessa Robertazzo, deputy for opposition party Cambiemos, said that “every 33 hours a woman who is a victim of femicide dies. We must review and evaluate the Venezuelan legal system to stop violence against women.”

In addition, the president of the Parliament, Jorge Rodríguez, appointed a commission to eradicate machismo and stated that “we will soon be declared a territory free of machismo.”

Feminist government
León analysis concluded that “the dignity of women comes from having had two feminist presidents: Hugo Chávez and Nicolás Maduro.”

“We [now] have  a Constitution that respects inclusive language and from there all respect and inclusion of women starts,” said Eehkout.

They also condemned that on March 9, 2015, the day after Women’s Day, Barack Obama declared Venezuela an unusual threat.

“They gave us a gift precisely on Women’s Day because the empire wants us to kneel down, but we have not given up and we are not going to give up.”

At the same time, they praised the plans for humanized childbirth, breastfeeding, recognition of the mother’s labor in the Organic Labor Law, and other inclusive projects.

They recalled that in the last 22 years, for the first time a woman has held leadership positions in the National Assembly, Vice Presidency, and in ministries such as Defense and Internal Relations, public powers, and Attorney General’s Office, among others.

Eradicate Machismo
At the beginning of the debate, Deputy María León reflected on the need for men to support women in this tireless fight in defense of all rights, towards equity, equality and against violence, to eradicate all signs of possible machismo in our country.

Deputy Eekhout added that she supports the call of President Nicolás Maduro to eliminate the patriarchy of the population: “the media and capitalism stimulate violence, and that must be eradicated and removed from the neoliberal phase,” she said.

Before concluding the first item on the agenda of the regular parliamentary session, the National Assembly approved the creation of a special commission to study and eradicate machismo in Venezuela, taking into account the femicide figures provided by the Prosecutor’s Office of the Republic.

This legislative body is chaired by Deputy María León, as reported by the President of Parliament, Jorge Rodríguez, who explained that “this special commission will be formed to study the causes of machismo and promote all the elements necessary for its eradication to eventually declare Venezuela a territory free of machismo.”

Below is the full text of the agreement approved by the Venezuelan Parliament:

FROM THE BOLIVARIAN REPUBLIC OF VENEZUELA

That on March 8 of this year the International Women’s Day was celebrated, proclaimed by the General Assembly of the United Nations in 1977, whose antecedents are found in the demonstrations of women in Europe at the beginning of the 20th century for the right to voting and better working conditions, as well as equality between men and women with deep roots in feminist movements at the dawn of the Russian Revolution of 1917;

That since 1944, Women’s Day has been commemorated in the country and the partial right of women to vote was approved, under the Presidency of General Isaías Medina Angarita;

That the Bolivarian Republic of Venezuela, since the constitutional process of 1999, includes in the Constitutional Text, the historical banners of struggle of the broad movements of women, honoring the commitments of the international instruments to guarantee their rights. This is how the Bolivarian Constitution is built with a non-sexist language and a transversality that guarantees equal civil and political rights in its Article 21, and the social, economic and cultural rights of comprehensive social protection for Venezuelan women, especially in Articles 75, 76, 86 and 88;

That, in the current context of permanent imperial harassment that violates the human rights of the Venezuelan people, has ratified the great heroism of Venezuelan women with a creative and productive resistance in daily life under the cruelty of the imposition of criminal unilateral coercive measures by part of the governments of the United States and the European Union. Despite this, Venezuelan women, who make up 50% of the population, have assumed the leading role at the forefront of Venezuelan society and of our Revolution, expressed in 70% of university enrollment, 70% of enrollment in the Health Sciences, 80% of community-based leadership, and 40% of political participation in the National Assembly. As well as every girl who carries one of the 5,000 laptops distributed in the schools, without distinction of sex, breaking the digital divide;

FIRST: Recognize that the Education System provided special attention to Venezuelan women since the beginning of this century, which allowed them to free themselves from illiteracy, as well as the Health System through the Barrio Adentro mission, which protects them from preventable diseases.

SECOND: Recognize the category of producers and productive workers applies to all women domestic workers, with emphasis on the three million women housewives, protected by the Venezuelan State, through the System of Missions and Great Missions; Recognize the 12,000 Communal Promoters of Humanized Childbirth; to the Communal Defenders of Women’s Rights, in promoting a life free of violence; to the Cooks of the Country, who have made love an act of resistance in the Schools of the Country; military women who, since 1999, are part of all the components of the FANB; to women scientists who develop science for life and with mysticism and professionalism are at the forefront in the fight against the first pandemic of this century.

THIRD: That unanimously, during the month of March, the National Assembly accompanies Venezuelan women in their historic struggles for their rights and endorses their flags for their equality and for the right to a life free of violence. In this sense, we are committed to guaranteeing a gender perspective and approach to all legislative initiatives and all regulations of the National Assembly, showing a consistent commitment to the women of our country, giving legislative priority to those laws aimed at guaranteeing women’s rights.

FOURTH: Exhort the Sister Parliaments of Latin America and the Caribbean to accept the request before the US Government to lift the unilateral coercive measures that impose pain and suffering on Venezuelan women. Inform the world that the seizure of funds from social programs by the action of the financial blockade threatens Venezuelan women and undermines the conditions of equality achieved.

FIFTH: Deliver this agreement to the Venezuelan Women’s Movements.

Done and signed in the National Assembly, in Caracas, on the ninth day of March, two thousand twenty-one. Year 210 of the Independence, 162 of the Federation and 22 of the Bolivarian Revolution.