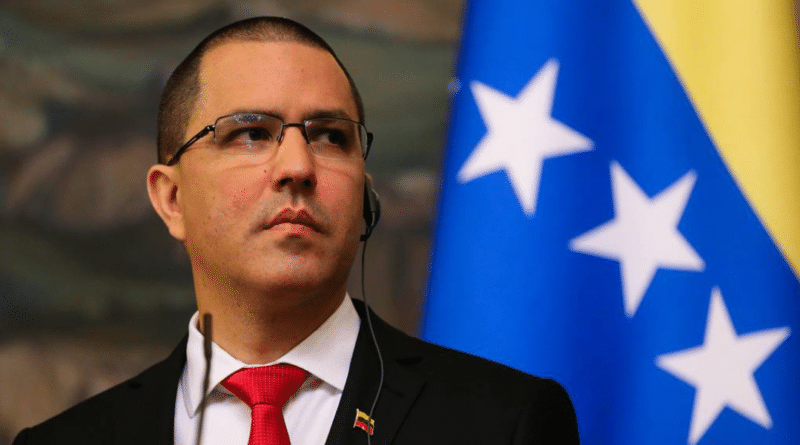 This Thursday, April 22, Venezuelan Minister for Foreign Affairs, Jorge Arreaza commented that a tweet posted by the acting Assistant Secretary of State for Western Hemisphere Affairs of the United States Department of State, Julie Chung, reveals how the US applies arbitrary and illegal measures that have generated suffering across an entire country.

Through his official Twitter account @jaarreaza, the Venezuelan top diplomat pointed out that what was written by the US official will be used as evidence in the International Criminal Court (ICC) and before the UN, as false ideologized arguments showing disrespect for International Law.

“Quite a confession! Valuable tweet to demonstrate in the International Criminal Court and before the UN, how, based on false ideologized arguments and disrespecting International Law, the US applies arbitrary and illegal measures that generate suffering for an entire people. Thanks!” Arreaza emphasized on the social media network.

Last Tuesday, April 20, Arreaza demanded that the US release all of Venezuela’s financial resources illegally held by the White House.

After the US State Department, through the Assistant Secretary for the Western Hemisphere, Julie Chung, stated via Twitter that it celebrated the signing of the memorandum of understanding between Venezuela and the United Nations World Food Program (WFP), Arreaza asked that the US lift its illegal unilateral coercive measures imposed on Venezuela.

In her tweet, Assistant Secretary Chung assured that the White House is committed “to alleviating the suffering of Venezuelans” and cited a WFP press release describing the signed agreement as “prioritizing attention to children, and the most vulnerable.”

Minister Arreaza responded to the message of the high US official: “If the United States is so committed to alleviating the difficulties (in our country), release the resources of Venezuela that are being held hostage in international banks and lift the criminal sanctions that generate suffering for all Venezuelans in the midst of a terrible global pandemic.”

In January 2020, in a report published on its website, USAID admitted that it delivered more than $467 million to sectors openly committed to political and economic destabilization, resources that experts conclude are from assets seized abroad, and of which former deputy Juan Guaidó and his collaborators received over $128 million over the course of a year.

This Monday, President Nicolás Maduro received the executive director of the WFP, David Beasley, in Miraflores. Maduro called for the two to work together “united as brothers… We will do what we can do to help.”

Featured image: Venezuelan minister for foreign affairs, Jorge Arreaza denounced US Under Secretary of State Chung’s tweet about illegal sanctions as a new probe for the ICC. File photo.