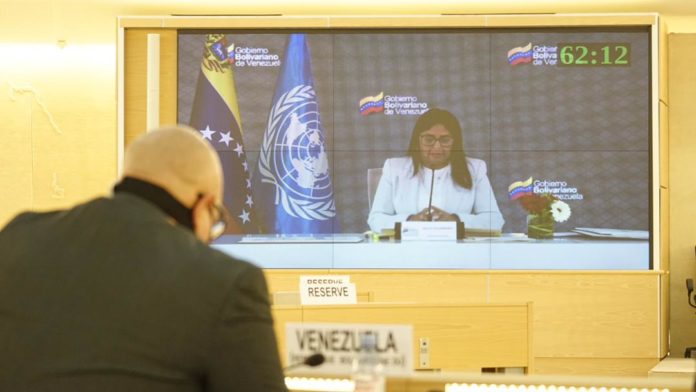 With a call for corrective measures to be taken within the United Nations (UN) on behalf of countries that suffer from unilateral coercive measures that violate fundamental rights—such as the illegal US economic blockade of Venezuela—Vice President Delcy Rodríguez defended Venezuela’s position during UN’s Universal Periodic Review (UPR) of human rights.

Rodríguez drew attention to the impact caused by the United States government’s application of 502 illegal coercive economic measures issued against Venezuela over the course of the past five years.

“I think something is wrong, when in the same room, in the same global home for human rights, we find ourselves among aggressors and victims of this type of policy,” said the vice president.

On the other hand, she pointed out that, in this context, Venezuela is undergoing its third UPR, and is still subject to the difficulties caused by the increase of such illegal measures (euphemistically called “sanctions”) that function as harmful weapons preventing the Venezuelan people from enjoying their rights.

“We must avoid at all costs the political instrumentalization of the human rights system,” said Rodríguez.

Contrived warfare
Similarly, the Venezuelan vice president reiterated Venezuela’s denunciation of “the artificial manufacturing of the humanitarian crisis warfare that the US government longs to happen in Venezuela, in order to intervene afterwards,” especially with respect to the campaign that was unleashed around the migratory issue.

For this reason, she commented that in 2020 the United Nations High Commissioner for Refugees certified that Colombia was the country with the largest number of internally displaced persons, with 8.2 million victimized by violence, paramilitarism, and drug trafficking.

Rodríguez recalled that this crisis causes migration into Venezuela as well, where Colombians have never been negatively branded, but have been received with open arms. She made it clear that the migration of Venezuelans is due to economic reasons, a consequence of the blockade imposed by the White House.

Among other issues, Rodríguez highlighted the inequality that afflicts the world due to the distribution of wealth between the North and the South, as well as the increase in geopolitical violence from the great hegemonic centers. She also cited the threats of the capitalist model to the environment as one of the most imminent concerns that humanity has.

Positive aspects
In her speech before the UN, Delcy Rodríguez emphasized that, amid all the attacks against economic stability, Venezuela has shown significant and encouraging numbers in the control of COVID-19.

“We do not know the future, but we are certain that we have set an example, that the free and universal healthcare system for our population has been successful in managing the pandemic,” Rodríguez said, without directly mentioning the  catastrophic failure of the US private healthcare network to respond the pandemic.

She also recalled that in just 20 years Venezuela has carried out 29 democratic electoral processes, and stands out as one of the least unequal countries in Latin America and the Caribbean. In addition, Rodríguez noted advances in the reform of the justice system, and plans to strengthen social programs.

Specifically, Rodriguez indicated that the country closed the last quarter of 2021 with growth in its gross domestic product of 7.6%. She repeated Venezuela’s willingness to work hand in hand with the office of the High Commissioner for Human Rights.

“This Human Rights Council must thoroughly review its action agenda in order to fly that flag,” Rodríguez stated. At the same time, she reiterated Venezuela’s acceptance of the 193 recommendations that emerged from the Human Rights High Commissioner, in addition to its adoption of another 24 voluntary measures.

“Today, attacked and harassed, Venezuela can demonstrate positive numbers, progress, and achievements, but it is also aware of its challenges,” she added, “expressed by confirming its willingness to work with the office of the UN High Commissioner for Human Rights.

Against arrogance
In a session of the United Nations Human Rights Council, the delegation headed by Vice President Delcy Rodríguez challenged the disrespectful pronouncements of spokespeople for the US and UK, for taking positions against Venezuela that violate international law.

“We reject the persistence and imposition of this type of behavior by hegemonic countries of the Northern axis,” Vice President Delcy Rodríguez stated.

Likewise, she thanked respectful governments for the recommendations they issued, and expressed her certainty that Venezuela would adopt them, always in consideration of what it has meant for a people to resist the blockade.

“Everyone must speak up for the lifting of unilateral sanctions against those countries that are victims,” ​​Rodríguez exhorted the UN.