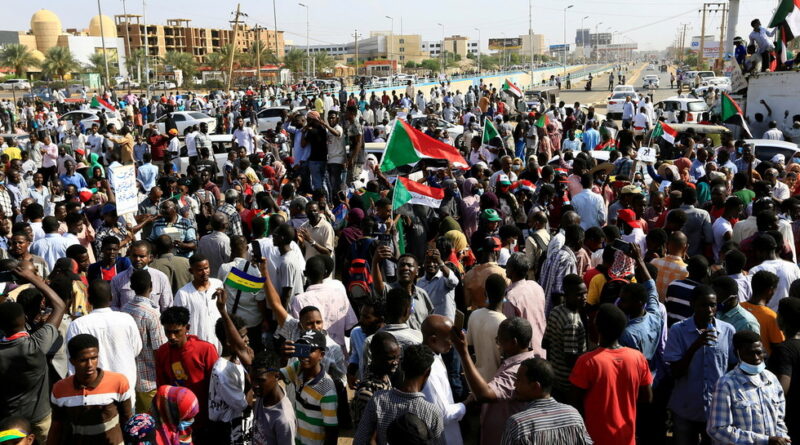 The military has seized power in Sudan, promising a democratic election in July 2023, but, as demonstrators face gunfire, it seems we may see a repeat of Egypt’s 2013 coup, which spelled an end to civilian rule.

The leader of Sudan’s Sovereign Council, General Abdel Fattah al-Burhan, announced on Monday the dissolution of the nation’s Transitional Government, which was formed following the overthrow of the country’s former President, Omar Bashir. The now former Prime Minister of Sudan’s Transitional Government, Abdalla Hamdok, was allegedly detained Sunday night and moved to an undisclosed location, after refusing to issue a statement supporting the military’s announced ‘State of Emergency.’ The European Union’s foreign policy chief, Josep Borrell, called “on the [Sudanese] security forces to immediately release those they have unlawfully detained,” which includes PM Abdalla Hamdok.

Protesters were filmed marching across Khartoum immediately after General Burhan’s announcement, blocking roads and chanting in their thousands against the takeover. Sudan’s internet services also seem to have been interfered with and phone lines cut. Unusually, unlike during the Sudanese revolution, there have been counter protests reported, as some Sudanese are said to be supportive of the military’s actions, although allegations have been made that the counter-protests were staged and not spontaneous. However, with this being the case, it is no wonder that many are comparing the situation to what occurred following the Egyptian revolution of 2011, which toppled long time dictator Hosni Mubarak and ended up ushering in an era of military rule.

In December of 2018 protests amidst a deepening economic crisis began in the Sudanese town of Artaba, quickly sweeping the entire nation. After months of consistent nationwide demonstrations demanding the removal of the long-time autocratic ruler, President Omar Bashir, Sudan’s Minister of Defence, General Ahmed Ibn Auf, announced that Bashir had been arrested after almost 30 years in power. The announcement, on April 11, caused an initial outburst of public euphoria, which was quickly spoiled for many.

A Transitional Military Council (TMC) was then proposed by Sudan’s military establishment, under which the constitution was temporarily frozen and the nation would remain in a State of Emergency for three months. It was said that after a two-year period democratic civilian rule would then be achieved. Yet, the people saw otherwise and demonstrated against the newly formed TMC, forcing its leader, General Ahmed Ibn Auf, to step down and allow for General Abdel Fattah al-Burhan to take his place.

Opposition groups, seeing the TMC as still not delivering on the demands of the people, engaged in a struggle for a quicker route to civilian rule and democracy. This came to a climax on June 3, 2019, when security forces and militia men massacred around 100 people, after a sit-in protest had been set up in late May in front of the military’s headquarters.

The brutal crackdown by the TMC then led to the ‘March of the Millions’, on June 30, which eventually brought much of Khartoum and neighbouring cities to a standstill. Eventually, after weeks of negotiations brokered by the African Union and Ethiopia, the protest leaders and the military’s top generals agreed to building on a power-sharing agreement, which sought to lead to eventual civilian rule. As a result, the 11-member Sudanese Sovereign Council was established, in which five civilian and five military members would work, with one civilian elected by the consensus of both elements of the power-sharing council, led by Abdel Fattah al-Burhan.

The entire process of the revolution cost at least 246 people their lives, with roughly 1,300 injured. For many now protesting, this bloodshed is seen to have been in vain, and it could result in further unrest throughout the country, as the body count of peaceful protesters seems to be once again on the rise.

In early October, anti-government protesters in Sudan’s East began a blockade of Port Sudan, which sparked fears of the country running out of fuel, wheat and essential medicines. As the Transitional Government struggled with a deepening economic crisis, as well as the blockade of the Red Sea Ports, strategically vital to military powers seeking to exploit the area, unrest began in Khartoum, with pro-military demonstrators demanding an end to the civilian element of the government. There was also an attempted military coup in September, which was ultimately blamed on “pro-Bashir elements.”

While many now focus on putting together the surface-level similarities between the revolution in Egypt and the Sudanese revolution, little focus seems to be placed on the potential foreign influences which are in the mix, which is what truly makes these situations so similar. The now President of Egypt was proven to have been backed by money from Persian Gulf monarchies, most prominently those of Saudi Arabia and the United Arab Emirates, which were accused of financing and facilitating the coup which installed General Abdel Fattah el-Sisi as the nation’s leader, later providing a joint UAE, Saudi, Kuwaiti $12-Billion aid package. Interestingly, in the case of Sudan, the UAE and Saudi Arabia also formed close relations with TMC and maintained ties to the military side of the ‘Sovereign Council’ which has now overthrown the civilian government.

RELATED CONTENT: The US Empire is Extorting Sudan Into an Unpopular Recognition of Israel

If it was true that elements of the military establishment still align with deposed President Omar Bashir, an ally of the Muslim Brotherhood (MB), it would make sense for the UAE and Saudi Arabia to have pushed to completely put down any attempt at the Brotherhood getting another foothold in the country. The current crusade being carried out from Abu Dhabi and Riyadh, aimed at combating the Muslim Brotherhood, was also the likely reason behind their backing of the military coup in Egypt, which saw the democratically elected, MB-aligned Mohamed Morsi removed from power. It is currently unknown as to whether General Abdel Fattah al-Burhan will lead his country towards the promised 2023 elections, under which a civilian government is promised, but if we are to follow past examples in the region, it is unlikely that this will hold; either due to mass revolts or to the military going back on its promises.

The country seems to be again on the path towards further chaos, but it could largely come down to foreign powers and their ambitions (the US just announced it was freezing $700 million in aid), to eventually determine the direction of Sudan. Which is a shame, considering how hard the Sudanese people have fought for a fair and representative democracy.

Robert Inlakesh is a political analyst, journalist and documentary filmmaker currently based in London, UK. He has reported from and lived in the occupied Palestinian territories and currently works with Quds News and Press TV. Director of ‘Steal of the Century: Trump’s Palestine-Israel Catastrophe’. Follow him on Twitter @falasteen47