This Monday, July 5, with the firm conviction that sooner rather than later a new wave of liberation and emancipation of the peoples of Latin America and the Caribbean will arise, President Nicolás Maduro participated in the civic-military parade to celebrate 210 years since Venezuela’s Declaration of Independence of Venezuela.

Maduro noted that those elites that still maintain economic, political, and media power in much of Latin America and the Caribbean, possess it for the time being but not forever. He denounced these leaderships for imposing their crumbling vision of America against the union.

He added that the liberator Simón Bolívar, Commander Chávez and the current generation were not wrong when they expressed their need to defend the independence of the State and the nation, the only way to recover all the social and economic rights of the people violated by the blockade. 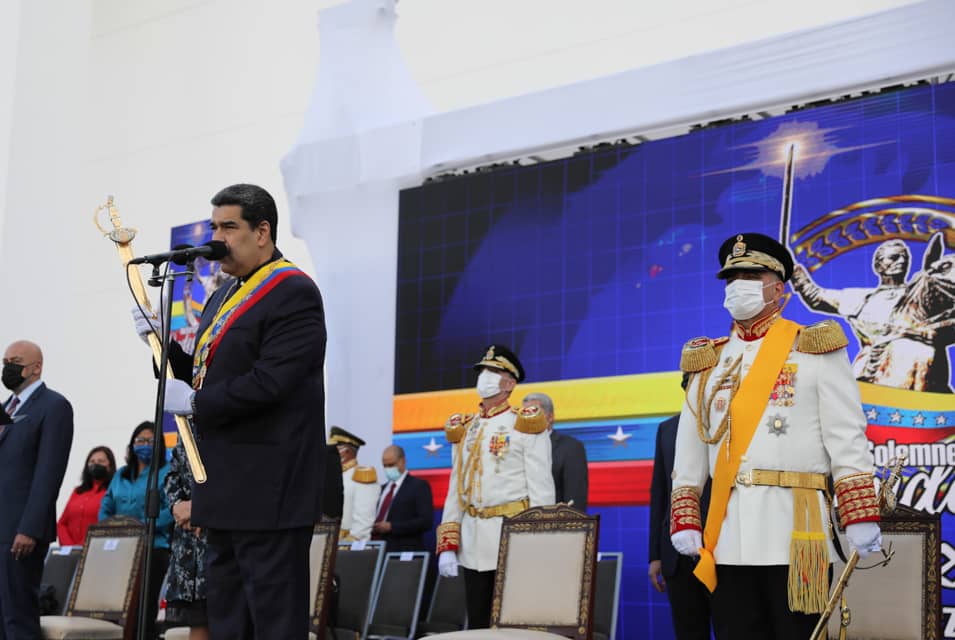 “Celebrating independence today, 210 years later, means a commitment to restore the socialist welfare state built in these years of the Bolivarian Revolution, regain the economic prosperity of the country, overcome criminal sanctions and find the path of sustainable development,” said President Maduro.

Military promotions
In his capacity as Commander-in-Chief of the Bolivarian National Armed Force (FANB), prior to the parade Maduro officiated over the promotion of officers to the ranks of Major General, Vice Admiral, Brigadier General, and Rear Admiral, among others.

Next, the president addressed the 174 officers promoted on July 5, to whom he recalled the honor of taking the oath bearing the original sword of the Liberator Simón Bolívar.

During the ceremony, the promoted troops confirmed their commitment to the fight “for the achievement of a sovereign, just, united, free and independent Venezuela.”

“We can tell the founding fathers that, 210 years later, we can celebrate that act of bravery in a land that is free, sovereign and revolutionary,” added the president. “With a calm mind and soul, in peace, and in full exercise of our collective wills, of the sovereignty of our beloved land.”

Union, discipline and loyalty
For his part, Major General Javier Marcano Tábata, commander of the parade in which 15,124 combatants marched, stated that the people, as the Bolivarian National Armed Force, remain united.

“We are determined, willing and ready, when you order, to defend independence. Make no mistake about it, imperialists: we will fight and win,” said Tábata.