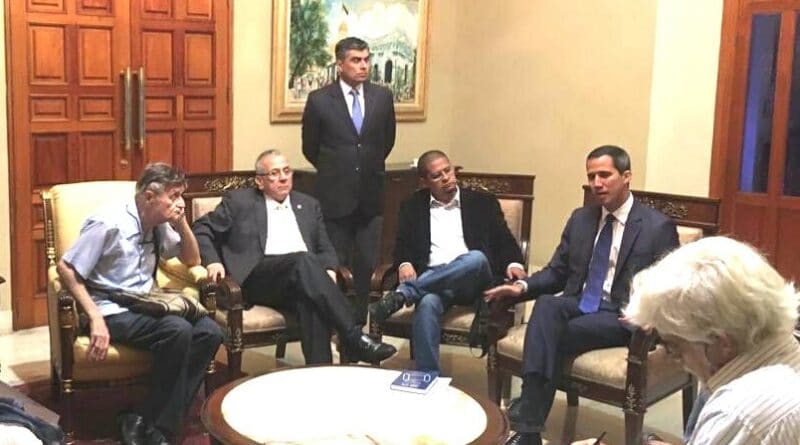 On Tuesday afternoon, Nicmer Evans, who was arrested last Monday after an arrest warrant was issued by the 21st Control Court in the charge of Judge José Márquez García, was transferred to the Palace of Justice in Caracas to be charged.

After being arrested, Evans was transferred to the General Directorate of Military Counterintelligence (Dgcim). His wife, Martha Cambero, moved there, from where she declared that “Nicmer is arrested for his video.”

But the last video released by Evans is one showing the arrest warrant signed at number 103-2020. In the video it can read that Judge Márquez García commissioned the Cicpc to arrest Evans for “promotion or instigation of hatred, contemplated in article 20 of the Constitutional Law against Hate.” In the video, released last Monday, the activist confirmed his support “for the president in charge Juan Guaidó” and said that Venezuela is living in “a new dictatorship.”

In recent days, especially after Diosdado Cabello and other Chavista personalities were found positive for Covid-19, Evans has posted controversial posts on his twitter account referring to death and divine justice.

And the day before his arrest, Evans released an informational note from his Twitter account about the Covid-19 case of the constituent Fidel Madroñero. Evans presented his followers with the note with the following writing: “A long life so that man’s justice comes before divine justice.” So far, the Public Ministry has not reported whether Nicmer was charged with any of the crimes contemplated in the Constitutional Law against Hate.

Nicmer Evans gained certain notoriety in Venezuela because of his close relation with some members of the editorial team of Aporrea.org. Later he, along with some editors of the website, funded a micro political party with trotskyist influence called Marea Socialista. Most recently he founded a new political party called “Movimiento Democracia e Inclusion” with a moto whose wording pointing at anarchism.

Evans is a self described former Chavista with a strong appetite for notoriety. He was among a few former Chavistas that jumped into a meeting with Juan Guaido just a few days after his self proclamation as “interim president’ of Venezuela.

At this moment the General Attorney’s office has not made comments on his arrest but imposing a charge means a formal criminal procedure is in progress.

Featured image: Nicmer Evans next to self-proclaimed Juan Guaido on February 5th, 2019, in a meeting with self described “former Chavistas”.