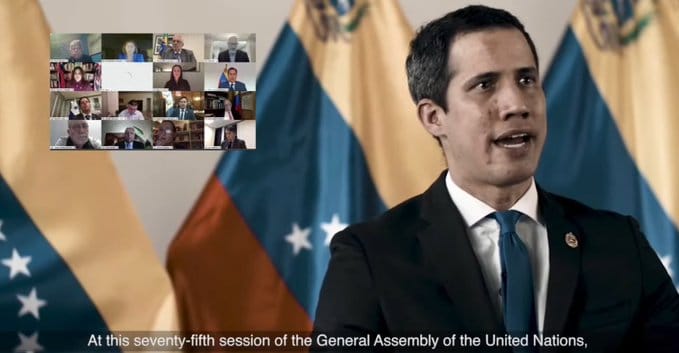 The Venezuelan ambassador to the United Nations, Samuel Moncada, said that while President Nicolás Maduro urged the member states of the United Nations to seek strategies that allow them to effectively fight the pandemic at a global level, Juan Guaidó, through a Zoom broadcast live on his social networks, asked that same entity for an invasion against his own country.

“The president spoke on behalf of a sovereign country, saying how we are going to try to solve the problems of Venezuela and the world regarding the pandemic,” an unprecedented situation that has put millions of people around the world at serious risk Moncada said and contrasted that request with the one made by Juan Guaidó – whom he referred to as “the United States puppet” – who called for the invasion of Venezuela.

RELATED CONTENT: UNHRC may be Contributing to US Aggression Towards Venezuela

“Can you think of such a betrayal of humanity, your people and even your own family? That in the middle of a pandemic, someone stands up and says: ‘throw bombs at my people and invade me’, that is what they did yesterday, ” he stressed.

In addition, he said that he does not understand how there are those who insist on saying that “that man who spoke on YouTube represents someone, and not the enemies of our people.”

On the other hand, he reported that President Nicolas Maduro held a formal meeting with the Secretary General of the Organization, António Guterres, in which he and Foreign Minister Jorge Arreaza also participated, as the representative of Venezuela in that international body.

RELATED CONTENT: At UN President Maduro Demands End of Sanctions and Blockades Against Venezuela — Guaidó Does a Zoom Copycat

The purpose of the meeting was to present the proposal for the creation of “a fund to buy medicines for all the poor peoples of the world or those in need or, worse still, for the peoples against whom economic warfare is being waged, suffocating them, as we are being suffocated,” he detailed.

“It cannot be possible that when there is a need to buy medicines, to buy treatments, to buy even gasoline for ambulances, there is a man in the United States doing everything possible to take the diesel fuel from us — that’s where they are going now, they are planning to sanction diesel — take our gasoline, stop the boats, steal our money,” the diplomat said.

Finally, he regretted that there are people in Venezuela who support such actions. “They do not understand the connection: if they take away the money to buy the medicines and if the supplies to produce gasoline do not arrive, the ambulance stops and their relative dies,” he concluded.