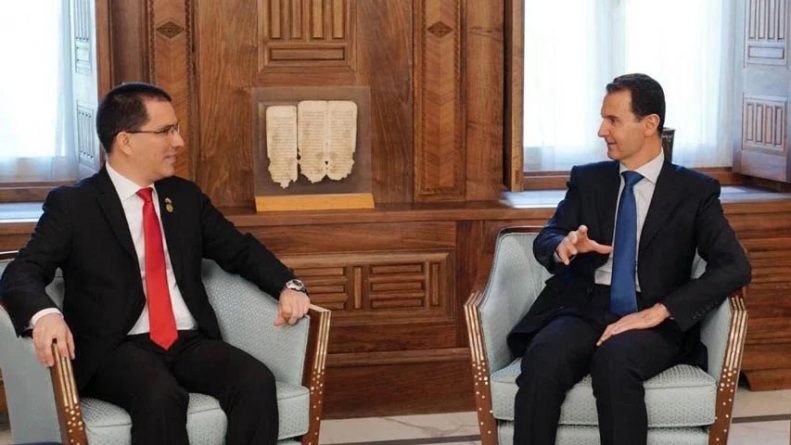 Syrian President Bashar Al-Ássad met with Foreign Minister Jorge Arreaza in Damascus on Thursday and showed his support for the government in the face of foreign “interference” which, according to him, is “similar” to that facing Damascus. Al-Ássad criticized “the interventionist policy” of some Western countries, especially the United States, and the imposition of sanctions against Venezuela which according to the Syrian president “undermines” international law and “violates the most elementary principles of the Charter of The United Nations”.

“What is happening in Venezuela is similar to Syria. The objective is to dominate and confiscate the independent decision of the State”, said Al-Ássad.

Arreaza said in a press conference with his counterpart, Walid al Mualem, that Venezuela had “defeated” the plans of the “extreme right” party led by the opposition Juan Guaidó to “destabilize the country with the help of Washington.”

The foreign minister added that Venezuela is about to “lose patience” with US policies and said that this could end his commitment to “diplomacy”.

With regard to Syria, the Venezuelan politician said that the “peoples of the world” should learn from Syria, which defeated “terrorist groups from all over the world.”

Venezuela is one of the countries allied to President Al Assad and has shown its support for the Syrian president since the beginning of the war in 2011.