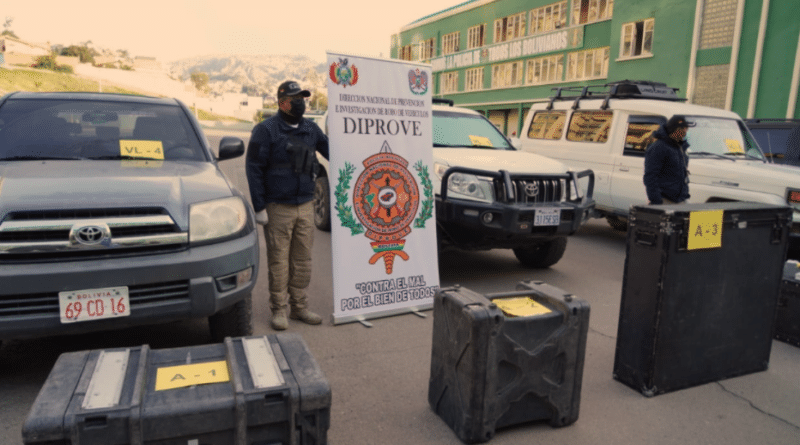 According to the Minister of the Presidency, Carlos Eduardo del Castillo, authorities from the Plurinational State of Bolivia delivered a fleet of vehicles to Venezuela which had been stolen by representatives of Juan Guaidó during “diplomatic meetings” which took place under the dictatorship of Jeanine Añez.

The President of Bolivia, Luis Arce, explained that Guaidó’s web of lies, concocted to overthrow the government of Venezuela, was supported by the regime which briefly took power in Bolivia after the coup d’état against Evo Morales.

“We delivered the keys to Venezuelan diplomatic personnel,” wrote Minister Castillo on social media. “The recovered vehicles which were stolen by Juan Guaidó’s lackeys from the embassy of Venezuela in Bolivia during their 2019-2022 meetings with the Añez regime.”

More than 34 vehicles were stolen by the personnel placed by Guaidó in La Paz, during the time that they worked with the dictator Jeanine Añez. However, of those 34 vehicles, only 15 of them have been recovered so far.

Other stolen goods
Minister Castillo also noted that a powerful antenna belonging to a Venezuelan communications company was also stolen, together with a firearm and ammunition. These items were recovered. In addition, they have found more communications and broadcasting equipment stolen from the Venezuelan embassy in Bolivia.

“On different occasions, through several raids, we have been able to recover some of the 34 vehicles which were stolen and then sold by those foreign actors who illegally entered in our country,”  explained the government official.

He added that an individual identified as Cesar Hernández, a former employee at the embassy, was responsible for the illegal acquisition of four of the vehicles which were then sold using false documents, and that other individuals were complicit in the crime.

Similarly, Castillo explained that the authorities are still carrying out the investigation in order to find the safe houses where the rest of the cars, property of the Venezuelan government, are hidden. “In the name of the government and people of Bolivia, we deeply lament the damage inflicted on our peoples by Añez and Guaidó,” he declared.

Featured image: The government of Bolivia delivers the vehicles and other goods which were stolen by Guaidó’s lackeys. Photo: REDRADIOVE
(RedRadioVE) by José Manuel Blanco Díaz
Translation: Orinoco Tribune
OT/KW/SL