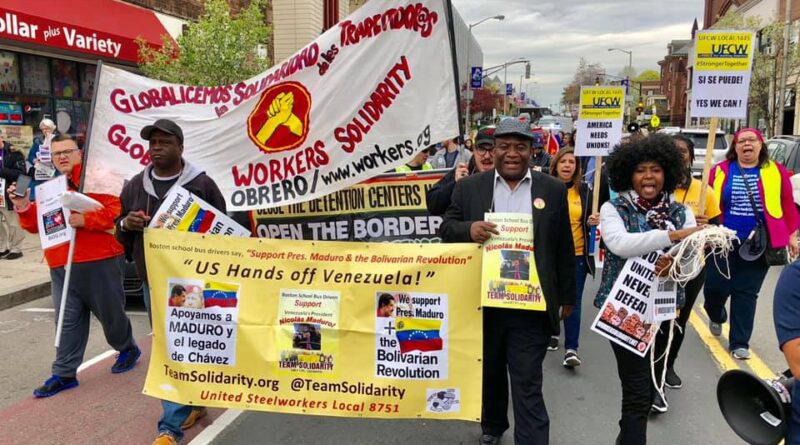 Editorial note: Boston School Bus Drivers (USW Local 8752) is one of the most progressive unions in the United States. It is based where the biggest community of Cape Verdean migrants lives within the United States, Massachusetts (Boston), which also happens to be the place where Cape Verde has its only Consulate in that country.

USW Local 8751 represents approximately 1000 school bus drivers in Boston and Randolph MA. Our drivers come from many countries, the majority are immigrant workers from Haiti and Cabo Verde. Our members bring with them experiences and struggles for justice from home. From the time of our formation in the 1970s we have struggled for union rights and human rights here in Boston and as well as countless struggles throughout the world for justice and freedom and in solidarity with all workers and oppressed people around the world. We are proud of our record of solidarity with Venezuela, President Nicolás Maduro and its Bolivarian leadership.

Our Cabo Verdean members, like their Haitian sisters, brothers and siblings continue to follow news from their home country. All members of our union are deeply distressed by the news of the imprisonment and torture in Cabo Verde of Venezuelan diplomat Alex Saab. This is a moment of great urgency because Alex Saab is facing immediate extradition to the U.S.

RELATED CONTENT: ‘We are Confident Cape Verde Constitutional Court will Finally Provide Alex Saab the Justice he has been Denied’: Jose-Manuel Pinto Monteiro

Whereas, the foundation of USW Local 8751, the Boston School Bus Union, for over 40 years has always been the principle that “an injury to one is an injury to all,”

And Whereas, Alex Saab is a credentialed diplomat to the African Union. He is held by U.S. demand in complete isolation in Cabo Verde and is in a life-threatening crisis.

And Whereas, Alex Saab is battling cancer. This has been untreated for the year he has been held. Medical care in country and a visit from a
London oncologist was refused by Cabo Verde officials.

And Whereas, Arresting and holding a diplomat for any reason is a violation of international law.

And Whereas, Alex Saab was on a humanitarian mission to Iran at the time of his seizure to arrange emergency shipments of food, medicine, and essential supplies for Venezuela. Venezuela is facing hunger and extreme shortages based on U.S. sanctions.

And Whereas, The U.S. charged Saab with “money laundering” for his diplomatic role purchasing essential supplies for Venezuela. In March, however, after a two-year investigation, Swiss prosecutors found no evidence Saab committed any irregularities.

And Whereas, The request for extradition is entirely illegal as the U.S. has no extradition treaty with Cabo Verde.

And Whereas, Saab never worked in nor lived in the United States, nor was he involved in any transaction that included the U.S. Every aspect of Saab’s seizure and abusive treatment violates international law.

And Whereas, Cabo Verde is a member of the Economic Community of West African States (ECOWAS). This body ordered Saab’s immediate release in March. Pressured by the U.S., Cabo Verde has yet to respond to ECOWAS and is preparing an extradition trial. If the U.S. government can extradite Alex Saab, Washington could be emboldened to seize, charge and extradite anybody anywhere.

And Whereas, Saab’s case impacts the 15 African countries already under U.S. sanctions. It resonates in U.S.-sanctioned Iran and in Venezuela, where social media campaigns and demonstrations have demanded Saab’s release.

And Whereas, Alex Saab was kidnapped, held and tortured under orders from the Trump administration.

Be it therefore resolved that,
We call on President Biden to drop the demand for Alex Saab’s extradition to the U.S. This kidnapping of a diplomat is clearly a violation of international law.

Be it further resolved that,
We call on the Republic of Cabo Verde Prime Minister Ulisses Correia e Silva and Cabo Verde President Jorge Carlos Fonseca to release Saab immediately to Venezuela on humanitarian grounds to receive medical treatment.

passed unanimously at the May 26, 2021 membership meeting.

Featured image: The president of the union (center), Andrés Françoise, marching in Boston carrying a yellow banner in solidarity with Venezuela. Photo courtesy of USW Local 8751.