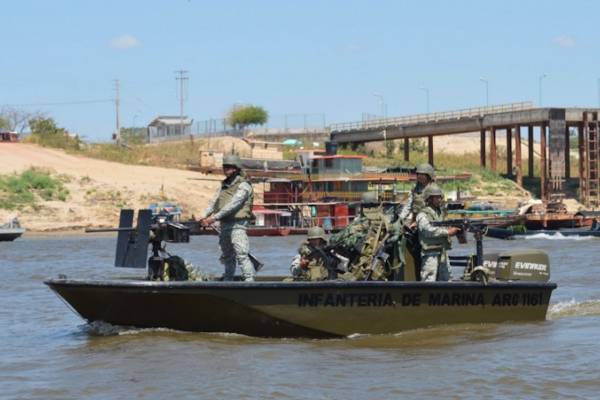 The Minister of Popular Power for Foreign Relations of Venezuela, Jorge Arreaza, urged the Colombian government to enter into political realism, out of respect for the Colombian people and to clarify the situation of the Colombian Navy boats found on Venezuelan territory.

According to the Colombian authorities, these vessels were “accidentally swept away by the current.”

The Venezuelan foreign minister expressed that the return of the boats will depend on the bilateral communication established at governmental level. “Yesterday President Maduro said clearly that for the boats to be returned there must be communication between the presidents, foreign ministers and defense ministers. Coordination will be carried out according to international good neighbor protocols,” he said.

RELATED CONTENT: Colombia Argues That Three Armored Boats Found in Orinoco River Were Lost and the Current Send Them to Venezuela – Twitter Uproar

In this regard, Admiral Evelio Enrique Ramírez, commander of the Navy of the republic of Colombia, said Monday that investigations are underway in his country to clarify the situation with the boats and their arrival on Venezuelan coasts.

Venezuelan analysts that still believe the Colombian “accidental Orinoco river current” story, have the impression that Venezuela was aware of the incident before Bogota.

“I had just arrived from Puerto Carreño, where I was on Saturday and Sunday and I hope tomorrow to have enough evidence to make the corresponding decisions,” said Ramírez.

The high official added that in the body he directs, there are established protocols for the mooring and securing of ships. He also explained that the investigation seeks to define where the guards were who were to guard the military equipment.

Meanwhile, the Venezuelan chancellor spoke, in addition, to all the occasions in which Venezuela denounced the terrorist plans and the training places of the mercenaries, without any action from his Colombian peers, even providing gps coordinates for the three mercenary camps located in Colombian territory.

“After Clíver Alcalá’s confession on Colombian radio on March 26, the authorities of that country did not investigate, nor did they do anything. In fact, the man was transferred to US territory (to get protection disguised as an extradition) and the Colombian authorities have done nothing,” recalled the minister.

The diplomat also made reference to the accumulated evidence in this regard. “We have taken 40 testimonies in the past few days, including from two US citizens,” he said.

Within this evidentiary material, he highlighted the statements of Luke Alexander Denman, a member of the group that sought to attack off the coast of the state of La Guaira, and those made to the press by Jordan Goudreau, one of those responsible for the operation.

Both citizens agreed to make clear the leading role of the US executive, as well as that the aggressors trained freely in Colombia, from where they left in their attempted incursion against Venezuela, according to the head of Bolivarian diplomacy.

Jorge Arreaza also considered Juan Guaidó’s responsibility in the aggression against Venezuela undoubted. “The connection of Juan Guaidó is indisputable, as revealed by the contract signed by him,” he said.