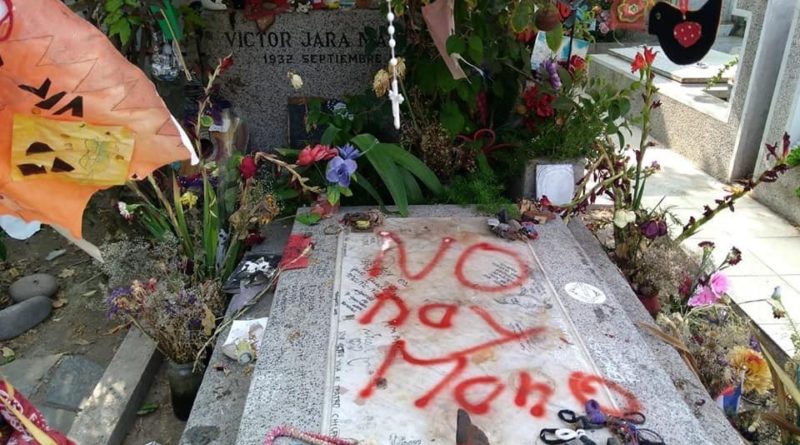 On Friday during the day, a group of the extreme right desecrated the tomb of the nationalist singer-songwriter, Víctor Jara, located in the General Cemetery of Santiago.

The Twitter account, Brigada Lobo, linked to the far-right group “Patria y Libertad” , uploaded the photos with an inhuman comment: the little hands, the little hands. Where are they? They are not there!

It should be noted that during the coup d’etat of General Augusto Pinochet, Víctor Jara was at the State Technical University, in Santiago, Chile, to sing in an act for President Salvador Allende the same day of the coup, September 11, 1973.

The next day he was taken prisoner together with 600 professors and students of the UTE. An army officer identified him, “Bring that son of a bitch here!” He sympathized with Allende’s socialist ideas. He was beaten and tortured, before and after his transfer to the National Stadium.

On September 16th his dead body is found next to the Metropilitan Cementery with his hands destroyed and 43 gunshot wounds.

A few last words:
Allende established a policy of redistribution of wealth, which affected the interests of the right and the United States. Richard M. Nixon ordered the overthrow of Allende through the FUBELT project. Henry Kissinger and the US CIA participated. During the Pinochet dictatorship, Congress was dissolved and human rights annihilated. The dictatorship left more than 3,000 dead, Victor Jara among them.

From the suburbs of Santiago, from the skirt of his mother, a singer, from the dreams of his people with whom he aligned his songs, Víctor Jara collected and revalued the peasant songs. His profound identification with the people was almost mystical.

Surely the criminal who vandalized the grave of the beloved singer-songwriter Víctor Jara, can explain how cowardly Pinochet and his henchmen were. They will lack days of their lives to pay for so much damage caused.

Featured image: A group of extreme right, made during this day scratched in the tomb of the national singer-songwriter, Víctor Jara, located in the General Cemetery.