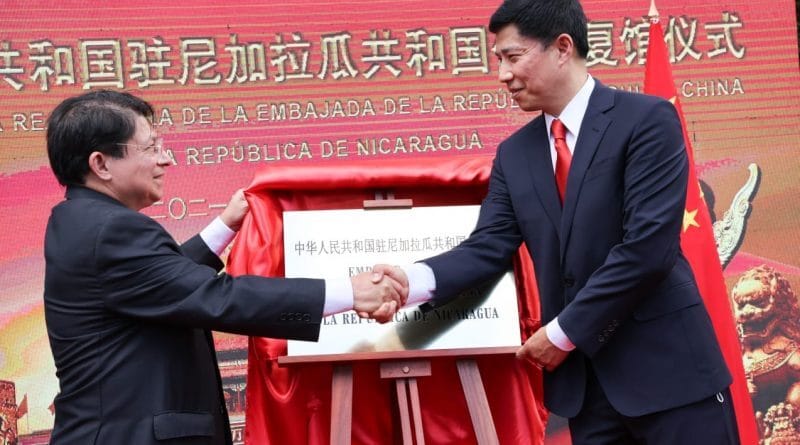 China and Nicaragua kicked off the new year with a reception and a toast to the official reopening of China’s embassy in Nicaragua.

What’s more, China’s Government Representative in attendance extended an invitation to Nicaragua to “take an active part” and join the Belt and Road Initiative “as soon as possible”.

Friday’s opening follows the December 9th announcement by Nicaragua to end its relationship with Taiwan and recognize just One China: the People’s Republic of China.

In his speech, Ortega Murillo remarked on the Chinese President’s New Year’s greeting, saying “In this important message, fellow President Xi Jinping reminded us of the importance of moving towards the integral construction of a modern socialist model with a long-term vision, prepared for eventual risks and maintaining strategic focus and determination.”

Representative Yu Bo remarked on the significance of the occasion; “Today is an important day in the history of relations between China and Nicaragua. 31 years later, the red flag with five stars once again flies above the Chinese Embassy in Nicaragua. I am honored and excited to be able to witness this historic moment together with you.”

“Development is the master key to solving all problems” stated Bo, who extended his country’s invitation to join its development projects. “Nicaragua is welcome to take an active part in this Initiative and to join as soon as possible the great family of the joint construction of the Belt and Road” declared Bo, adding, “On the eve of the New Year, we wish that the relations between China and Nicaragua are as dignified and prosperous as the Sacuanjoche of Nicaragua, and as resilient and indestructible as the Great Wall of China. “

Foreign Minister Denis Moncada, recalled the revolutionary parallels between China and Nicaragua; “Two peoples who have fought for their National Liberation with perseverance, achieving progressive victories for Peace, prosperity, eradication of poverty and the harmonious coexistence of Peoples and Nations.”

Moncada signaled that Nicaragua will infact be looking to communicate further on the Belt and Road Initiative. “We are sure that we will continue working together, strengthening each day the fraternal ties of friendship, cooperation, investment, expanding communication channels with the Belt and Road, strengthening Peace, Stability, Security, Development and Progress for the mutual benefit of our Peoples and Humanity” said the Foreign Minister.