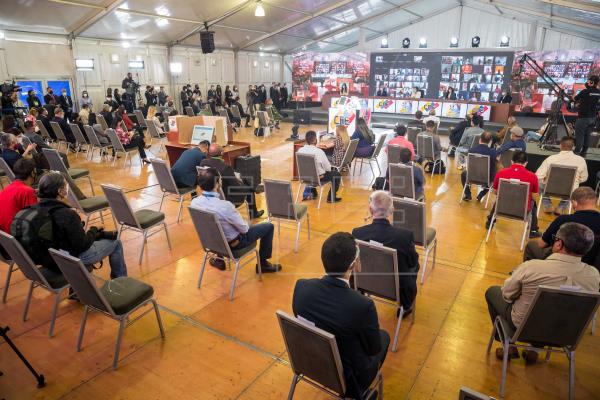 The rector of the National Electoral Council (CNE), Carlos Quintero, reported this Thursday that the electoral body is advancing in their technological process ahead of the parliamentary elections scheduled for December 6. “80% progress has been made in all logistics activities and CEOFANB (FANB) will have the responsibility of safeguarding all electoral materials, and at the same time they should be the key to coordinating efforts to guarantee security in order to avoid COVID-19 infections during the elections and the drills,” he said.

He added that a total of 381 voting centers have been activated for the October 25 electoral drill, of which 55 are pilots. Similarly, 945 voting tables have been set up, 110 of them pilots.

The information was presented during a meeting held between the Electoral Power and the Minister for Defense, Vladimir Padrino López and the Strategic Operational Commander of the Bolivarian National Armed Forces (CEOFANB), Remigio Ceballos, at the CNE headquarters in Plaza Caracas, in order to guarantee the safety of Venezuelans during the parliamentary elections.

He added that 15 National Logistics Committees and 11 regional ones have been established to guarantee the electoral schedule process.

Similarly, he reported that the electoral system has technological innovations, among them that the polling station will only have three members at each table, to avoid unnecessary crowds.

“This electoral event is the most difficult challenge yet for the CNE due to all its characteristics, such as the US blockade and the pandemic, undoubtedly the greatest challenges for December 6. We have worked hard so that the country has all the necessary measures, and can vote in peace,” he pointed out.

Quintero specified that the National Support Center will have 70 people to provide timely attention to any circumstances that may arise, as well as a Rapid Attention Center and a National Totalization Center, which has been reinforced in coordination with institutions of the State such as CANTV, Movilnet and Corpoelec, among others.

He announced that as part of the electoral schedule this Friday the third audit of the software and hardware of the new voting machines will end. “Organizations with political ends (political parties) must communicate to voters what has been approved in these audits,” he said.

From November 3 to December 3, the Electoral Campaign for the elections will take place, reported the president of the Electoral Power, Indira Alfonzo, according to a press release.

“The board of directors of the National Electoral Council (CNE), in its permanent session, concluded their discussion and approved the Special Regulations for the Electoral Campaign to govern these parliamentary elections, the regulatory body of which will be formally presented to the political parties running that constitute more than 90% of the groups that are legally and legitimately registered with the CNE.”

Alfonzo emphasized that said decision “conforms to the spirit of collaboration, balance and pluralism that characterizes the electoral body,” adding that “the pandemic forces us to innovate and get in tune with new methodologies that allow the participation and motivation of the Organizations for Political Purposes.”