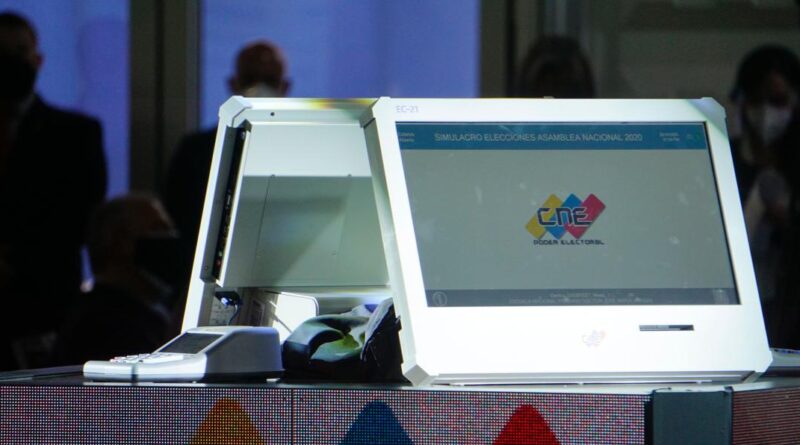 This Friday the Venezuelan National Electoral Council presented the new voting machines that will be used in the parliamentary elections scheduled for December 6 to renew the authorities of the National Assembly.

The president of the electoral body, Indira Alfonzo, led the event held at the main headquarters, in Plaza Caracas, to which the media and members of the diplomatic corps were invited.

Alfonzo affirmed that the Electoral Power uses the most advanced technology to carry out the parliamentarians, which places Venezuela at the forefront of the electoral systems of the region and the world.

“With this presentation of the technological solution and the electoral horseshoe (voting protocol), transparency and the automated system will continue to be guaranteed,” said Alfonzo, adding that all machines are subject to biosafety protocols when Venezuelans exercise their right to vote this next December 6.

Regarding the biosecurity protocols for the elections, a required distance of one and a half meters was established between voters and polling station members, as well as little physical contact. Voters must disinfect their hands at each stage of the electoral horseshoe.

According to the explanation of the rector Carlos Quintero, it is a “machine designed in Venezuela, by Venezuelan technicians, with the experience that the Electoral Power has accumulated over these 20 years, and since 2004 we began the race for the automated voting.”

This, she explained, is due to the loss of the technology park located in Filas de Mariche, Miranda state, which generated the components that are 100% Venezuelan, and thus avoids dependence on international suppliers, with the development of machines with certification of use, installation, components, and transmission, among other audit stages.

“These facts have allowed us to generate new software that facilitates the electoral process and the transmission of data, by the hand of Venezuelan technicians, and complies with constitutional guarantees such as the right to vote and vote reliability, now with biosafety measures, since all software is auditable,” said Quintero.

The electoral process will have 16 audits, 12 of which will be carried out in its preparation phase, one during the day of the elections and three after the elections, in addition to the audits of the electoral data, the summation software in order to certify the correct certification of the machines, and generates a chain of trust between the political organizations that will be running in these elections.

In this sense, Quintero specified that, as has been established in the schedule, from October 12 to 23, audits will be carried out on the machines and software. “We will audit all elements of the Electoral System” and “on Sunday, December 6, before starting the electoral process, the pre-dispatch audit will be carried out with the 107 political organizations.”

He explained that the machine has the latest technology features “and an industrial design to withstand all the rigorous processes to which it will be subjected.” It has an automated system with a high resolution screen, an integrated 10-hour battery life, as well as integrated sound to assist the participation of voters with disabilities.

He also stressed that “the software facilitates and guarantees the voting process. This machine is simple and voting times are below 20 seconds, appropriate to these times of pandemic so that the voter spends as little time as possible exercising their right to vote”.

It also counted on the presence of representatives of organizations with national political purposes and of indigenous peoples, ambassadors, chargé d’affaires and heads of international organizations, members of the Diplomatic Corps accredited to the Government of the Republic of Venezuela, national media and international organizations, electoral missions in the world, the Latin American Council of Electoral Experts, and the Anibal Ford Institute for Communication Studies in Media, Culture and Power (INESCO).