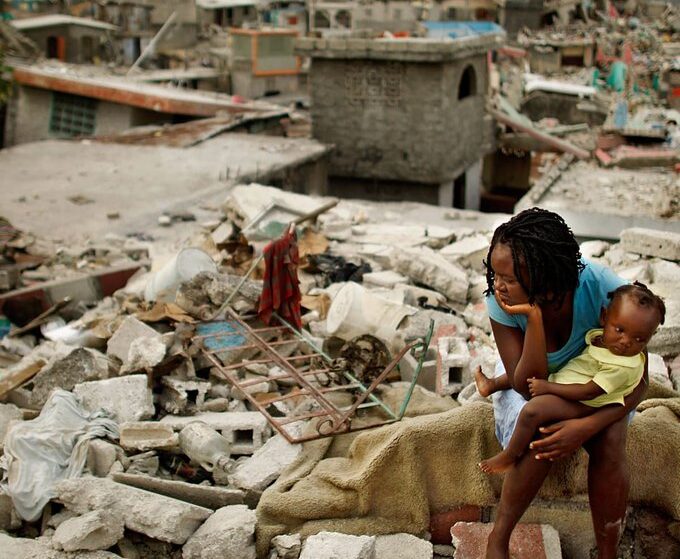 Haitian woman with a baby in her lap seating over earthquake rubble. Photo by Twitter /@KhaledBeydoun .

On Saturday, August 14, Haiti was shaken by a strong earthquake of magnitude 7.2 degrees on the Richter scale, causing severe damage to infrastructure and deaths and a large number of injuries. By Saturday afternoon, the death toll that was initially 27 fatalities was raised to 304; however, authorities fear receiving more reports of deaths from this shocking event. In addition, as the epicenter of the earthquake was on the sea floor, tsunami warning was activated by the US Geological Survey. 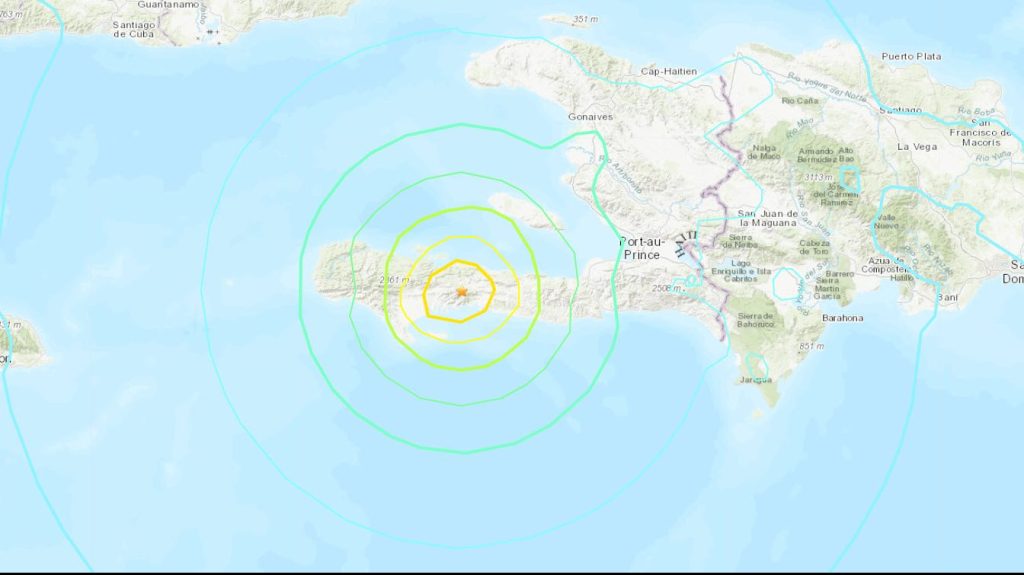 At about 8:30 in the morning (local time) the earthquake began to be felt, and as in 2010, when almost 300 thousand people died and more than two million were left homeless, there were no previous warnings. However, on this occasion, the people quickly sought refuge and ran out of their homes and into the streets to save their lives, as there still exists the fear from the 2010 earthquake. This was evident on videos posted in social media platforms.

The greatest impact of the earthquake was felt in the south of the country, the epicenter being located 12 kilometers northeast of the city of Saint-Louis du Sud, originating at a depth of 10 kilometers. Material damage has been reported by the local authorities, and can also be seen in videos and photos posted on social media platforms.

Moreover, other Caribbean countries such as Cuba, the Dominican Republic, Jamaica and even Aruba (near Venezuela) were shaken by the earthquake.

The prime minister of Haiti, Ariel Henry, published a message for his compatriots on Twitter and called on “the spirit of solidarity and commitment of all Haitians” to face “this dramatic situation that we are currently experiencing.”

RELATED CONTENT: Claude Joseph to Resign as Acting Prime Minister of Haiti—or How US Imperialism Operates

Tsunami alert
The United States National Oceanic and Atmospheric Administration (NOAA), which monitors the emergence of possible tsunamis around the world, gave warning of the threat of giant waves almost an hour after the strong earthquake struck.

The organization also indicated that “tsunami waves that can reach 1 to 3 meters above the tide level are possible in some coasts of Haiti,”  as a result of the earthquake. However, no major tsunami incident has been reported.

Real solidarity vs. fake solidarity
While many from Haiti are calling for direct donations to real humanitarian organizations working on the ground and really building things in Haiti, Venezuelan Foreign Affairs Minister Jorge Arreaza expressed his solidarity with the Haitian people at this difficult moment. “We are attentive to provide logistical support and necessary supplies,” he announced in a tweet. “Our condolences and wishes for recovery of the injured.”

The majority of Haitians consider Venezuela and Cuba among the few countries that really provided material and real assistance to the Haitian people after the 2010 earthquake, and many in the island criticize the role of the Red Cross, the Clinton Foundation, the United Nations (UN) and the Organization of American States (OAS), that stand accused of embezzling the humanitarian assistance money, or in the best case, to politically destabilize the embattled Caribbean country.

Death and destruction in southern #Haiti. Haitians in Haiti and in the diaspora should mobilize to assist victims, to keep the UN and other humanitarian invaders / disaster capitalists out. They made billions off of suffering Haitians after the 2010 earthquake and built NOTHING.

After Saturday’s earthquake, many on social media platforms requested donors to avoid making donations to the Red Cross, the UN and other influential NGOs, condemning them for being “humanitarian invaders” that made billions off the suffering of Haitians after the 2010 earthquake, without constructing or repairing anything. Many Haitian social media users, both inside the country and in the diaspora, suggested alternative organizations to send donations and support.

🗣 PLEASE DO NOT DONATE TO THE RED CROSS. #Haiti https://t.co/9yEJmNtl3k

Some analysts have suggested CELAC as a credible international source of real support for Haiti under current circumstances, mainly because of the presence of countries like Cuba, Venezuela, Bolivia, Mexico and others not committed to capitalist big business that usually ruins everything it touches.

Cuba’s solidarity with Haiti is felt immediately after the terrible earthquake. Cuban doctors already on the ground treating the wounded. #LetCubaLive pic.twitter.com/peqKpvA1Sy

Cuba’s solidarity was felt almost immediately on the ground, with Cuban doctors treating the wounded, as was reported by Manolo De Los Santos on his Twitter account as well as by the Cuban Ministry of Foreign Affairs.

Featured image: Haitian woman with a baby in her lap seating on rubble left by the earthquake. Photo: Twitter/@KhaledBeydoun.