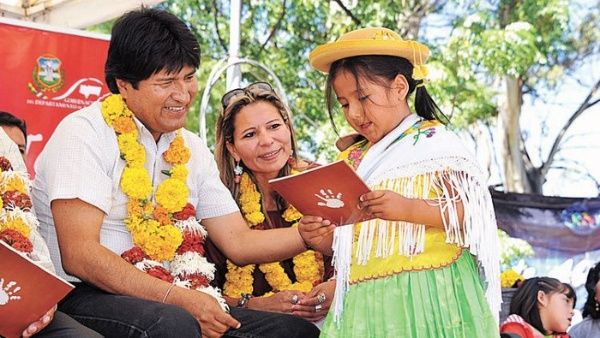 Our dear sister Bolivia, the most impoverished in South America, in 2019 was declared by the UN as a High Human Development country for the first time in its history. It was no accident. Since 2006, the first indigenous President in the history of America led a plurinational, revolutionary and non-violent process, which marked a before and after in the life of Bolivians.

The country model of equality, social justice and sovereignty led by Evo must be recognized internationally.

In 1980 I received the Nobel Prize for our fight against Latin American dictatorships, articulated among themselves by Operation Condor which the United States ran.

As in the case of Lula, the first union leader president of America, whom I nominated for the Nobel Prize in 2019, Evo is also a symbol of resistance against the new Operation Condor that today carries out military, media and judicial coups, to outlaw parties politicians and candidates who achieve high voting intention because they implement sovereign policies in favor of the people.

Democracy is at risk in our region and we cannot be silent. We cannot allow the Bolivian civic-military dictatorship with its racial hatred, nor the coup activity of the OAS in the hands of Luis Almagro. We want free and transparent elections in Bolivia, the end of the forced exile of Evo Morales, and the international recognition of this plurinational people for their successful social model of Peace and Nonviolence.

Here is the letter of application I presented to the Norwegian Nobel Committee (Eng. / Eng.):

It is an honor for me to present before this Committee the candidature of a union and social leader, the first indigenous President of Latin America, who managed to successfully implement programs to fight poverty, inequality, climate change and, therefore, to foster peace. That is, the candidature of Evo Morales Ayma for the Nobel Peace Prize.

The answer to the following question is not simple: what sort of social structure prevented for more than 200 years that an indigenous person became the President of a country whose population is mostly indigenous?

Almost two thirds of Bolivia’s inhabitants identify themselves as part of a collective indigenous identity, but their structures were defined by the fact that social mobility depended on the individual’s skin color, mother tongue and last name. Thus, anti-values based on racism and discrimination against the indigenous majority were promoted.

In a society such as the Bolivian one, for the elites, the term “indigenous” was considered an insult and native languages were banned in practice. Poverty was intimately linked to ethnic condition. In that environment, Evo Morales Ayma carried out his political and union struggle, always resorting to peaceful means provided by democratic paths.

14 years ago, Bolivia was the poorest nation of South America, the most unequal country, with a very low life expectancy rate, and dependent on international cooperation even for paying the salaries of doctors and teachers.

RELATED CONTENT: New Study Reveals that US-backed Coup in Bolivia Was Based on Lies

Today, Bolivia is growing at twice the rate of its neighbors. Its GDP exceeded 5% per year, when the average for the rest of the countries is 2%.

Now, Bolivia has the lowest unemployment rate of the region.

Bolivia was the country with the most coups d’Etat in its history but, during those fourteen years, there was political stability.

Bolivia was declared by UNESCO as territory free of illiteracy.

A public health system was created, establishing a system of universal access to health. More than sixteen million medical consultations were held and child malnutrition was reduced by half.

With the Juancito Pinto welfare bonus, designed to eradicate child labor and school dropout, more than 900,000 students of almost 14 thousand schools were benefited.

A political system in which women have an equal representation was built. More than 50% of the legislative bodies are made up of women.

In 1995, only 9% of women owned land. Currently, 45% of women are owners of land. In 2005, one in ten women suffered from unemployment. Today, that number has been reduced by half .

In addition, child labor has been reduced by 80% in Bolivia.

The minimum wage was increased from 440 Bolivians in 2005 to 2,122 Bolivians currently.

Access to water, telecommunications and electricity was universalized and recognized as rights.

Extreme poverty was reduced in an impressive manner: from 38% to 15% in 14 years.

The gender gap was also substantially narrowed. Now, according to the Economic and Social Forum, Bolivia is ranked number 17 in the world, above many developed countries.

In sum, according to the United Nations, in 2019 Bolivia was classified for the first time ever as a country with a High Human Development Index.

Much is said about an economic miracle. These surprising figures, however, are the result of the struggle of the Bolivian people and of the leadership of Evo Morales.

The fight against poverty and inequality has made of Bolivia a country that was building a sustainable and lasting peace.

These structural changes, nonetheless, affect the interests of elites who do not want things to change. Over 14 years, those elites attempted on several occasions to overthrow the legitimate and legal government of Evo Morales.

Those attempts were finally consummated on 10 November 2019, when the Armed Forces and the Police forced the President to resign and, thus, consummated a coup d’Etat.

Evo Morales preferred to resign, in order to avoid a confrontation. He managed to save his life thanks to the generosity of the Mexican government, which granted him asylum and provided him with a plane that, after many difficulties, managed to get him out of Bolivia.

Unfortunately, the coup government perpetrated massacres and has unleashed a systematic persecution against former authorities of the toppled government.

Similarly, the de facto government has begun to take economic measures that seek to destroy the economic model that brought so many people out of poverty.

It is these and other reasons that encourage me to present this candidature. I am convinced that the Nobel Peace Prize for Evo Morales Ayma will be a just recognition and an incentive in the struggle for inclusion, for the eradication of poverty and for sustainable development.