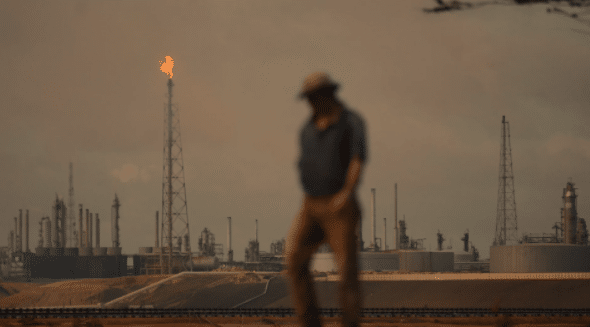 International News
March 29, 2022 KWORINOCO Fertilizers, Oil, Russia, sanctions, Ukraine
The financial, economic and diplomatic war declared by the US and the EU against Russia has sharpened the crises of the world economy. From Caracas, experts have analyzed the implications of the Ukraine conflict for the Venezuelan economy, specifically for the energy and agriculture sectors.
Russia recently became the most sanctioned country in the world—in less than a month, the country was subjected to over three thousand unilateral restrictive measures, the majority of which came from the US. In total, since 2014, Russia has been subject to more than five thousand sanctions.
According to Caracas-based expert in oil policy David Paravisini, these actions, which Moscow has considered a declaration of ̈”economic war”, include the freezing of assets, attacks on state-run businesses and banks, the prohibition of imports of crude oil, and the severing of Russia from the SWIFT international payment system, among others, and have profound consequences for the energy sector.
Paravisini, in an interview with Sputnik, explained that “Russia is a key player, which alongside Saudi Arabia and the US, takes turns being the main oil producer of the world. Thus the conflagration that we are currently experiencing has serious implications for Europe and will tend to increase its implications for the rest of the world. Therefore, the effects of this will definitely be felt.”
However, Paravisini, who is also an engineer and a university professor, believes that in the energy sector, Venezuela will not suffer the implications of the sanctions against Russia as much as other countries in the region, because the Caribbean country has its own oil and gas sector, already under the influence of hundreds of similar measures imposed against the state-run oil company PDVSA.
He went on to note how “it might be the sector that will be least hit by the conflict, especially considering that Venezuela could substitute Russian oil, which accounts for 8% of the oil consumed by the US, and is a considerable amount for a country like Venezuela. And I am saying this because I consider that the lifting of the sanctions, which would let Venezuela expand its oil production, is a complex process and I doubt it has a short term resolution.”
Here he was referring to the meeting, on March 5, between Venezuelan President Nicolás Maduro and a delegation sent by the US government to Caracas, during which —according to Washington’s version— one of the issues which was addressed was US “energy security.”
Opportunities for Venezuela in the midst of the conflict
Today the US is the main oil producer of the world, but it needs to import crude and other derivatives in order to satisfy its high levels of consumption, which has been partially remedied through fracking —hydraulic fracturing—but the high costs of carrying out this technique impose limits on its ability to facilitate self-sufficiency.
RELATED CONTENT: Russia Says it has No Spies in Mexico
With the sanctions imposed in 2019 on oil imports from Venezuela, at a time when Venezuela was selling almost a million barrels per day to the US, the US started buying more crude from Russia, which has now been sanctioned as well.
“Which means that Venezuela is faced with an interesting opportunity—we are talking about almost 240,000 barrels per day,” said economist and deputy of the United Socialist Party of Venezuela (PSUV) Tony Boza. “First of all, Venezuela has reaffirmed that its strategic partner is Russia, this isn’t under question, and our solidarity with the Russian people hasn’t changed. Secondly, the dialogue with the US is pointless if the legitimate government of Nicolás Maduro is not recognized by the US, and if the sanctions are not lifted, which are totally at the margins of any legal framework.”
In an interview with Sputnik, Boza has highlighted how, despite the fact that these recent events will certainly bring with them a series of technical, administrative, and accounting difficulties, the fact is that Venezuela’s industries have historically been aligned with the US model of production, consumption, and refining of oil.
“To expand the levels of crude produced by Venezuela, which today is approximately a million barrels per day, there will be some initial barriers,” said Boza. “But there are possibilities, because the majority of the spare parts that the Venezuelan oil industry needs are from the US. Of course, the first order of business are the conditions announced by the Venezuelan government if there is to be an agreement, but in any case, what we have is a possibility which didn’t exist before the Ukraine conflict.”
Sanctions, food, and threats
According to the Food and Agriculture Organization of the United Nations (FAO), in January 2022 the world price index of food reached record levels over the last 10 years. In this regard, Boza added, in 2022, after the Ukraine conflict, there was a 30% increase in the average price of the main grains: wheat, corn, and barley.

“This will undoubtedly have serious consequences on a world scale, especially considering the war against Russian gas,” said Boza. “What we are seeing is a situation that is putting the world on edge because it could damage agriculture that depends on nitrogen fertilizers, which are derived from gas. This, according to FAO experts, could slash food production by 50%, so we are speaking of the possibility of famine in several parts of the world.”
In Venezuela, the effects of this situation began to be felt in the prices of products derived from wheat, and pasta “disappeared” from the shelves, alerted the president of the Energy and Mining Commission of the Venezuelan Parliament, Ángel Rodríguez.
In an interview with Sputnik, Rodríguez said that the trigger for the Ukraine conflict was “the stubbornness of the US and NATO for its blockade and aggression toward Russia with its war machine” and that, unfortunately, this situation will have long term impacts for the region and the world.
Rodríguez has affirmed that the government of Venezuela is actively working to mitigate the effects of the crisis on the economy and is calling for changes to be made in the economy so that the country can break from its dependency on wheat, a product which will increasingly become more costly, by producing alternatives such as rice and corn.
“Ukraine is the breadbasket of Europe, and Russia as well, which is also a huge producer of fertilizers and other chemicals necessary to fertilize the soil,” explained Rodríguez. “If we add this to the spike in the cost of crude, which went from $80 to $120 per barrel since the start of the conflict and which appears to keep rising, well, there is a situation with serious consequences, mainly for Europe, but also for Latin America.”
RELATED CONTENT: Russia Uses a Fraction of its Military Capacity to Avoid Unnecessary Casualties in Ukraine
Venezuela is prepared for the crisis
Regarding the repercussions for Venezuela in the hydrocarbon sector, Deputy Rodríguez considers that the crisis between NATO and Russia “has perturbed the energetic dynamic of the country,” and in his opinion the idea of replacing the oil imported to the US from Russia with Venezuelan oil is “realistic and feasible.”
“We are currently producing almost a million barrels a day under the blockade, and this year we can raise production to two million. If the sanctions are lifted which impede the normal trade of our main export than we could expand our productive capacity much more, but without changes in the aggressive policies of the US, we cannot achieve this goal,” clarified Rodríguez.
In this sense, he considers that Venezuela is ready to contend with the challenges which might arise in the hydrocarbon market due to the crisis in eastern Europe, since oil producing countries will benefit from the high prices.

“Despite the US’s attempts to break the OPEC agreements and flood the market to lower prices, the organization has stuck to its balanced policies because it also knows what extremely high fuel prices mean for the world. The issue of fertilizers is also a potential opportunity for Latin America to fill the gap in the market because Venezuela produces and exports fertilizers,” concluded the president of the Commission of Energy and Mines of the Venezuelan Parliament.

Similarly, professor Paravisiny affirmed that PDVSA could expand its production and that regarding fertilizers, one of the most affected countries by the Ukraine conflict is Brasil, Venezuela’s neighbor.
“There is a possibility for Venezuela to fill this fertilizer deficit provoked by the US and NATO, who want to keep Europe from being independent with Russia’s support, which is also capitalist. But the US doesn’t even permit the game of capitalism to be played,” concluded the oil industry expert.
Featured image: A man stands in front of an oil plant. Photo: AP Photo/Natacha Pisarenko.
(Sputnik Mundo)
Translation: Orinoco Tribune
OT/KW/SL