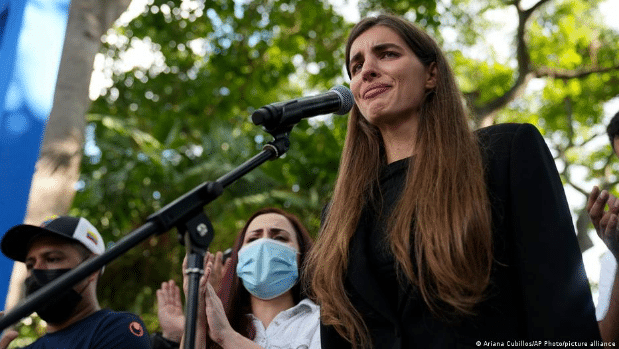 Alex Saab’s April 6 hearing takes place in the setting of a mercurial world situation, where events in Ukraine may have indirect bearing on his case and on the larger US economic war against Venezuela.

In a world where the US believes it makes the rules and the rest of humanity must follow its orders – what President Biden euphemistically calls the “rules-based order” – Washington has now even appropriated the prerogative to tell other countries who they may appoint as their ambassadors. As a consequence, Venezuelan diplomat Alex Saab is fighting for his freedom before the 11th District Circuit Court in Miami.

US economic war against Venezuela
Alex Saab was appointed a special envoy with diplomatic credentials by the Venezuelan government on April 9, 2018. The businessman had worked on the government’s food assistance (CLAP) and public housing programs. More importantly, he was assisting the government in trying to circumvent sanctions imposed on Venezuela by the US; sanctions intended to punish the people so that they would be motivated to overthrow their democratically elected government.

The sanctions, which started in 2015 under Obama, have been ratcheted up by every successive US president since. Known as “unilateral coercive measures,” this kind of collective punishment is a form of economic warfare and is illegal under international law.

As the US Government Accountability Office (GAO) admits: “The Venezuelan economy’s performance has…fallen steeply since the imposition of a series of US sanctions.” By barring access to basic necessities, such measures are as deadly as bombs. An estimated 100,000 Venezuelans have perished due to the sanctions as of March 2020, according to former UN special rapporteur for human rights Alfred de Zayas.

Violation of diplomatic immunity
On June 12, 2020, with diplomatic passport in hand, Alex Saab was en route from Caracas to Tehran to procure food, medicine, and fuel in legal international trade. His plane was diverted to the island archipelago nation of Cabo Verde off the coast of West Africa for a refueling stop. There, in an egregious example of extra-territorial judicial overreach, the US had him seized without warrant and thrown in prison.

As a Venezuelan special envoy and deputy ambassador to the African Union, Saab was protected by the Vienna Convention on Diplomatic Relations. Under this treaty, diplomats are supposed to enjoy absolute immunity from arrest, even in the time of war.

Not only is the US a signatory to the Vienna Convention, but the US Diplomatic Relations Act also protects all diplomats. Further, Saab is not a US citizen, and the alleged “crime” did not take place in the US. In short, the US prosecution of Saab is not a legal one, but a purely political act in the economic war against Venezuela.

The regional court of the Economic Community of West African States (ECOWAS), which has jurisdiction over Cabo Verde, ruled that not only must Saab be freed, but that he also be awarded monetary damages. Cabo Verde first appealed the verdict. After losing a second time, Cabo Verde simply flaunted the ruling, apparently under instructions from Washington. Similarly, the UN Human Rights Committee’s finding in favor of Saab was ignored.

While incarcerated in squalid conditions, Saab wrote a series of letters about how he was tortured in an unsuccessful attempt to force him to reveal the secrets that facilitated humanitarian supplies reaching Venezuela, bypassing the US blockade.

Second kidnapping of the Venezuelan diplomat
Then on October 16, 2021, the US perpetrated what Venezuelan President Maduro called the “second kidnapping.” Alex Saab was unlawfully abducted – spirited away with no legal papers and no notification to his family or legal team – and flown to Miami, where he has languished in prison. The US does not have an extradition treaty with Cabo Verde and, with its presidential election scheduled to be held the next day, the US feared that the new administration there would free Saab.

Initially, the US charged Saab with eight counts of money laundering. But the changes were reduced to a single one of “conspiracy to money launder,” a notoriously vague legal gimmick that is conveniently difficult to disprove.

Previously, an exhaustive three-year investigation was conducted into allegations that Saab was misusing Swiss banks. Swiss government prosecutors, however, found no evidence of money laundering on the part of the Venezuelan diplomat.

In fact, Saab is a political prisoner in the US empire’s drive to beat an independent Venezuela into submission by weaponizing economics. Even sources hostile to the Venezuelan government admit that the reason Saab is targeted is that he was instrumental in the “vast network [that] allowed Venezuela to evade [illegal] US oil sanctions.”

Opposition figurehead Juan Guaidó had been “anointed” president of Venezuela by Donald Trump in January 2019 and had been initially recognized by over fifty of the US’s allies. Now, the hapless puppet is recognized by only the Biden administration and a handful of US vassals. As the Wall Street Journal reports: “The political movement the US has backed in Venezuela to challenge the country’s authoritarian [sic] government is on the verge of breaking up…”

Guaidó’s opposition faction had previously boycotted what they considered “illegitimate” Venezuelan elections. But in Venezuela’s November 21 “mega-elections,” all the opposition – including the extreme far right – participated. Not only was this an implied recognition of the government’s legitimacy, but Maduro’s socialist party swept these regional and municipal elections.

Venezuela resists the economic war as the US faces blowback
The catastrophic US economic war against Venezuela, which deliberately and effectively targeted the cash cow of the Venezuelan oil industry, is being countered. The Maduro administration is trying to steer the economy out of its extreme dependency on petro chemicals.

In response to the US economic blockade, Venezuela partly backfilled with Russian and especially Chinese trade. Rebounding from a severe drop in exports, Venezuela led the region in percentage increase this last year. Russia also provided military assistance as part of a larger global geopolitical shift.

After suffering negative growth, the Venezuelan economy is recovering with modest increases projected in GDP. Hyperinflation and currency freefall have now been overcome with monetary measures and de facto dollarization. The oil industry, after crashing, is again exhibiting vital signs with help from Iran, Russia, and China. The spike in international oil prices associated with the conflict in Ukraine also benefits Venezuela.

However, the sanctions against Russia by the US and its allies are explicitly designed to impact Venezuela. Over 40 countries in addition to Venezuela are sanctioned by the US, some one-third of humanity. Especially with the initiative against Russia, the US may be inadvertently precipitating a global realignment with more and more countries forced to decouple from the US-dominated world economic system.

Changing international climate
Meanwhile, the international scene has been looking more bullish for the Bolivarian Revolution. The rightwing clique of anti-Venezuela counties in the Organization of America States (OAS), known as the Lima Group, has disintegrated with left-leaning presidents elected in Mexico, Argentina, Chile, Honduras, Bolivia, and Peru. Coming up are presidential elections with left-leaning frontrunners in Brazil and Colombia, two of the most reactionary anti-Venezuela governments in the region.

A sign of a changing political climate is an article in Forbes, which editorializes that US sanctions “have clearly become counterproductive” and calls for rescinding the coercive measures. The news outlet acknowledges that the sanctions “have impoverished the country but left the ruling class mostly untouched.” In other words, the sanctions had achieved their proximal goal of ravishing the Venezuelan economy but not its ultimate goal of regime change.

Even the Washington Office on Latin America (WOLA) think tank criticized the sanctions. Leading luminaries at this liberal cheerleader for US imperialism previously complained that Trump was holding back on the very sanctions, which he then imposed and which – in an apparent pang of conscience – WOLA now finds distasteful.

Another telling signal came on March 5, when the chief US government official for Latin America, Juan González, brought a delegation to Caracas and met with President Maduro. The two states do not have diplomatic relations, and this was the first high-level US visit in years. Escalating gasoline prices precipitated by the Ukraine conflict forced Washington’s concessionary move, implicitly recognizing the legitimacy of the Maduro administration. However, the discussions on easing oil sanctions have yet to yield results.

Another member of the US delegation was, significantly for Alex Saab, the US’s presidential special envoy for hostage affairs, Roger Carstens. Amid speculation that a deal might be struck to free the Venezuelan diplomat, Caracas released two imprisoned criminals with US citizenship as a gesture of goodwill.

Despite Washington’s best efforts to quash Venezuela, President Maduro has led a nation standing firm. The tide is flowing in favor of the Bolivarian Revolution and perhaps for Alex Saab. An international campaign has arisen to #FreeAlexSaab.