This Tuesday, July 13, during a press conference held at the Federal Legislative Palace, the president of Venezuela’s National Assembly (AN), deputy Jorge Rodríguez, presented new evidence of destabilization attempts perpetrated by the extreme right, which armed and trained the gangs of Cota 905 to try overthrowing the government of President Nicolás Maduro.

Rodríguez stated that on June 22 an attack was thwarted that would have targeted President Nicolás Maduro while he was inaugurating the monument for the Bicentennial of the Battle of Carabobo. Four drones were used in the attack, which were intercepted and deactivated by Venezuelan intelligence services.

The President of Parliament also linked the company CTU Security, based in Miami and owned by Antonio Indriago, with the events that recently occurred in Venezuela. CTU Security is the same company that hired Colombian mercenaries suspected of participating in the assassination of the ruler of Haiti, Jovenel Moïse. The company, as Rodríguez related, also provided security for the Venezuela Aid Live concert organized against the government of Nicolás Maduro in Cúcuta, Colombia on February 2019, and was also contacted by the opposition for the August 2018 drone assassination attempt on President Maduro.

Rodríguez showed a tweet from Antonio “Tony” Indriago, the owner of CTU Security, in which he spoke about the death of President Maduro.

The president of the National Assembly also reported that the extreme right wanted to use criminal gangs to carry out a series of attacks on July 5, Venezuela’s Independence Day, or the following days. He showed a video taken by one of the criminals from a point in the neighborhood in El Valle, from which they could observe the Military Academy and the Paseo Monumental [Paseo Los Próceres], where the July 5 parade takes place and where the presidential platform was going to be present. 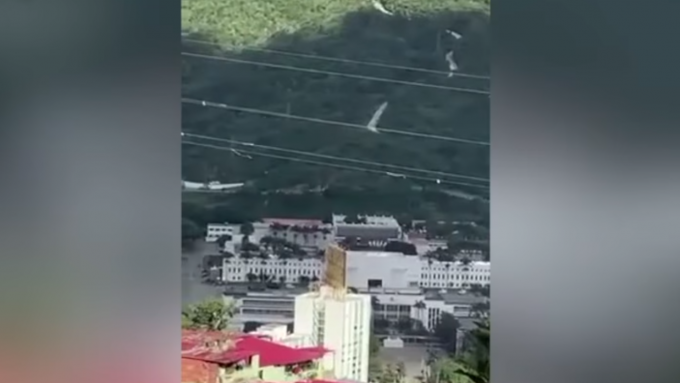 Rodríguez presented a series of items of evidence demonstrating the relationship between the Venezuelan far-right opposition and these criminals, who on July 7 and 8 fired at citizens and passersby from El Cementerio, La Vega, Quinta Crespo, El Paraíso, and areas surrounding Cota 905, leaving several dead and wounded. He showed a series of WhatsApp messages through which Leopoldo López, under the alias of “Gavilán,” organized the criminal actions carried out by these gangs stationed in the neighborhoods of Cota 905 and El Cementerio.

Among López’s contacts for the organization of these criminal actions were Freddy Guevara and Luis Somaza who, with Gilber Caro and Hasler Iglesias, were in charge of “finalizing the details” to carry out this operation, which they called the “Fiesta from Caracas,” he said.

“Here are the messages,” said Rodríguez. “They deleted them [from their phones]. What they do not know is that they can be recovered with a home-made program, as we have done.” The president of the AN proceeded to show the conversations in which López outlined the steps to guarantee the “success” of these terrorist actions. 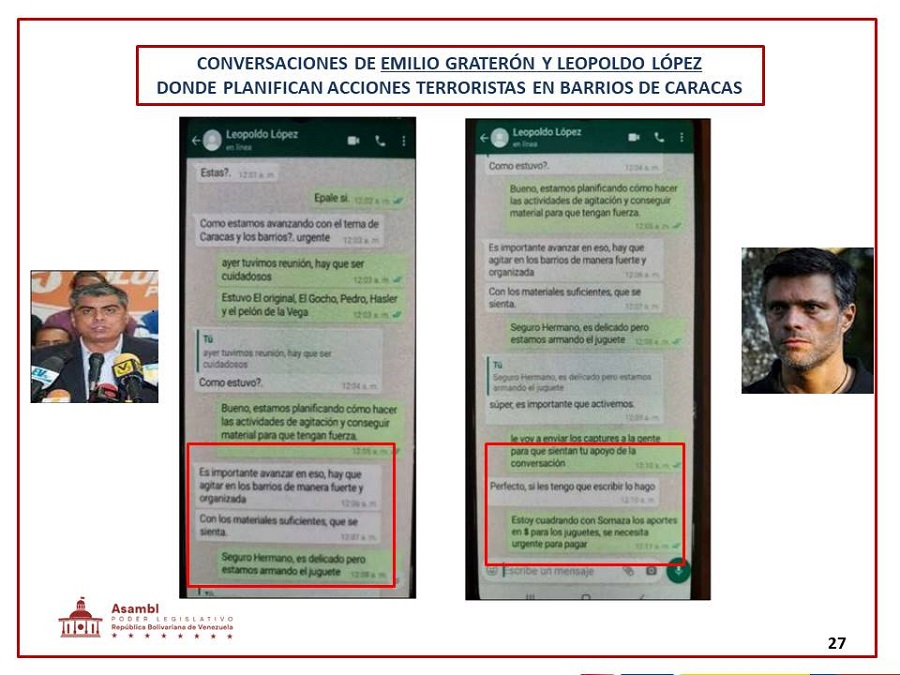 “They believed that, since the Norwegians and the European Union’s Technical Exploratory Mission were here, they had impunity, and were sending Freddy Guevara to the meetings,” he said.

From Madrid, López planned the terrorist actions perpetrated in the working-class neighborhoods of Caracas. “Gocho Javier” and “El Catire” were the liaisons of Voluntad Popular in Cota 905, Rodríguez revealed. They are now wanted. “We have messages that implicate them in the terrorist actions perpetrated by the criminal gangs of Cota 905. We know that Leopoldo López organized violence in the neighborhoods with financing and weapons.”

The parliamentarian advocated that, once the evidence against Gilber Caro and Emilio Graterón had been shown, the Public Ministry would issue arrest warrants.

Rodríguez also denounced, as a curious fact, a June 23 conversation between Juan Esteban Gómez, Colombian intelligence agent (working for Iván Duque), and Javier Tarazona, director of Fundaredes, in which Gómez said that an attack on Iván Duque’s helicopter would occur in the next few days, which actually happened on the June 25. This caused Rodríguez to presume that the attack was a setup in order to blame Venezuela.

The president of the AN also reported that the investigations uncovered indications of the use of cryptocurrency platforms to finance the terrorism, assassination plots, and paramilitary operations.

“Enough of the pardons!”
Rodríguez recalled that both Guevara and Caro have received pardons from the Venezuelan government, as part of the goodwill gestures towards sectors of the opposition that had requested them. In this sense, Rodríguez called for an end to the solidarity expressed towards these characters whom he described as “criminals.”

“Enough of this unquestioned solidarity,” said Rodríguez. “He is a murderer, he is not a political leader! A political leader is one who stands before the media and presents ideas, participates in elections, or promotes an agenda within a framework of peace.”

Rodríguez regretted that these repeat offenders continue to hide behind the discourse of “political opposition” and warned that those who attempt to destabilize Venezuela will have to bear the consequences. “We don’t want them asking for pardons later,” he reiterated. “Enough is enough.”

Likewise, he confirmed that Freddy Guevara was not “disappeared,” he was imprisoned for terrorist and paramilitary plans against the Republic, and is linked to Leopoldo López in the organization of the terrorist acts in Cota 905. The investigations provided ample evidence that Freddy Guevara was involved in the events of July 7, resulting in his arrest. He will face a trial by the Public Ministry (MP).

Guevara and López communicated through WhatsApp, where the latter gave instructions on the financing and provision of weapons so that the terrorists from the Coqui gang could carry out the destabilization plan. 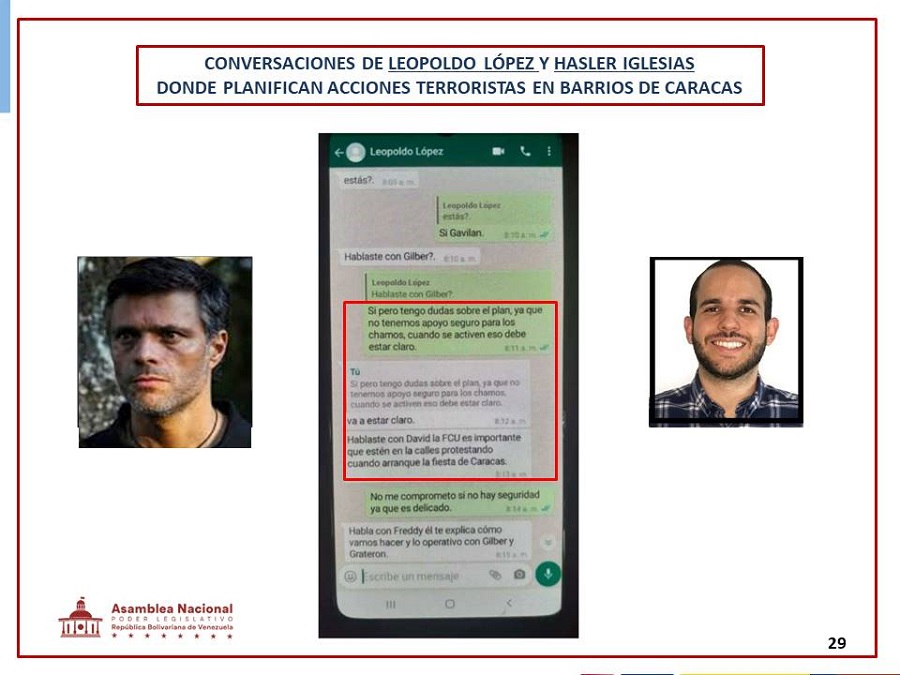 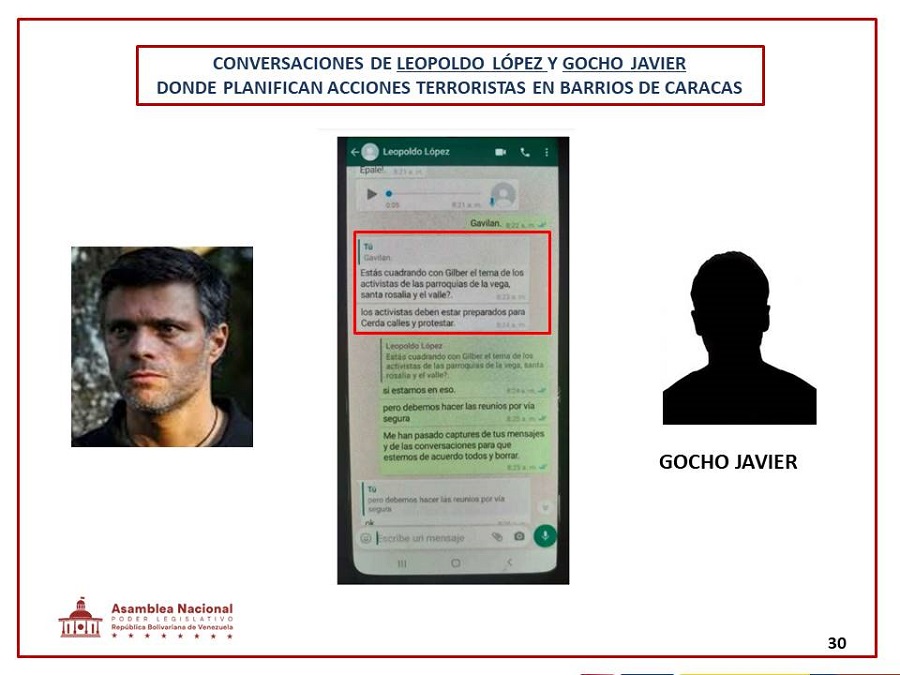 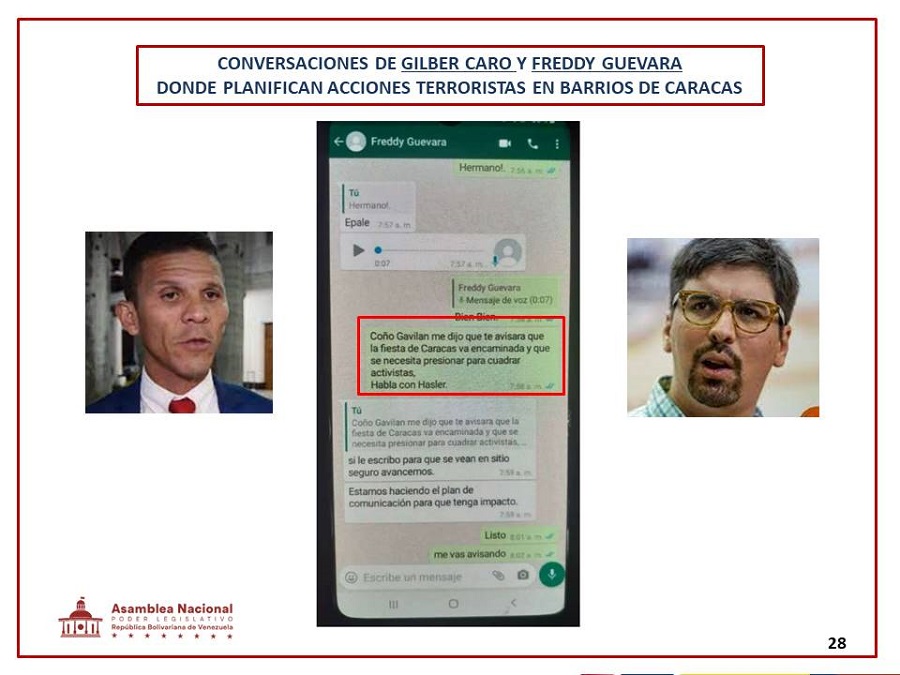 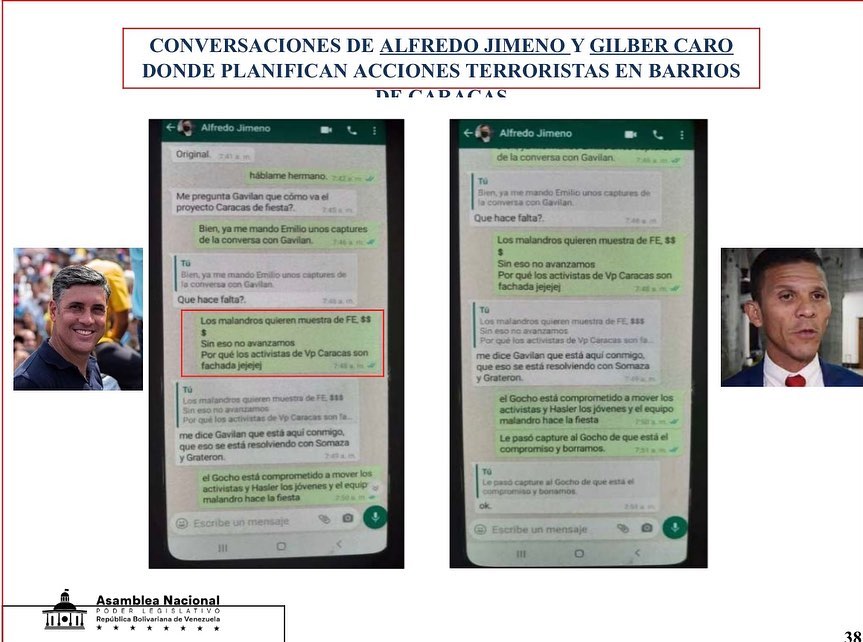 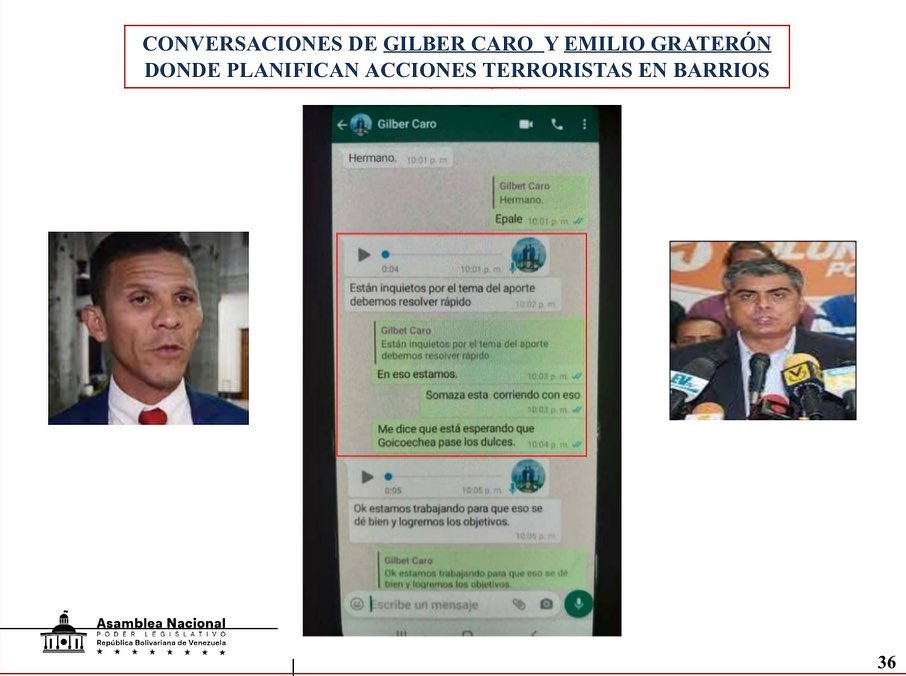 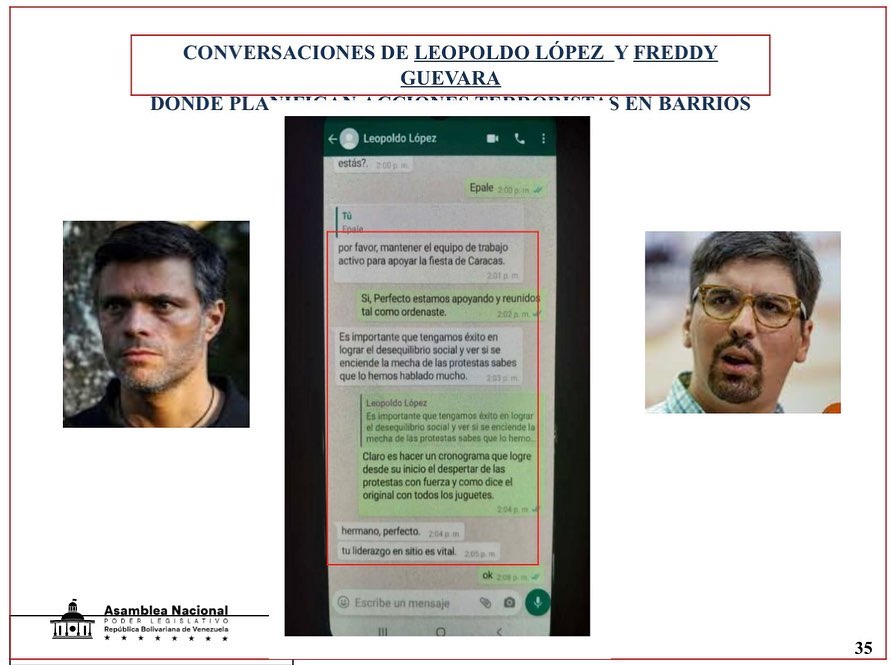 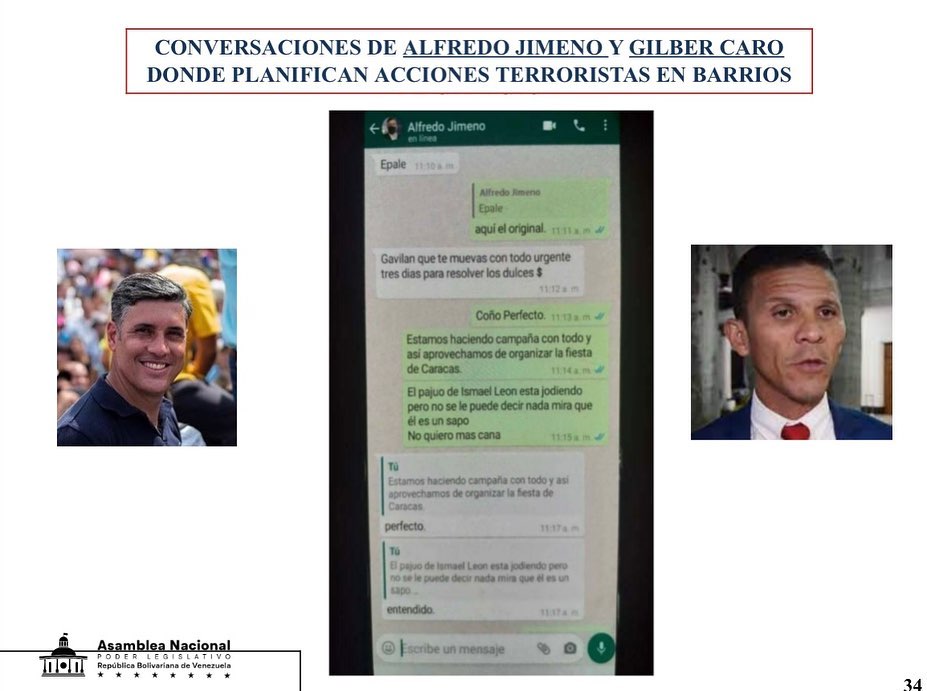 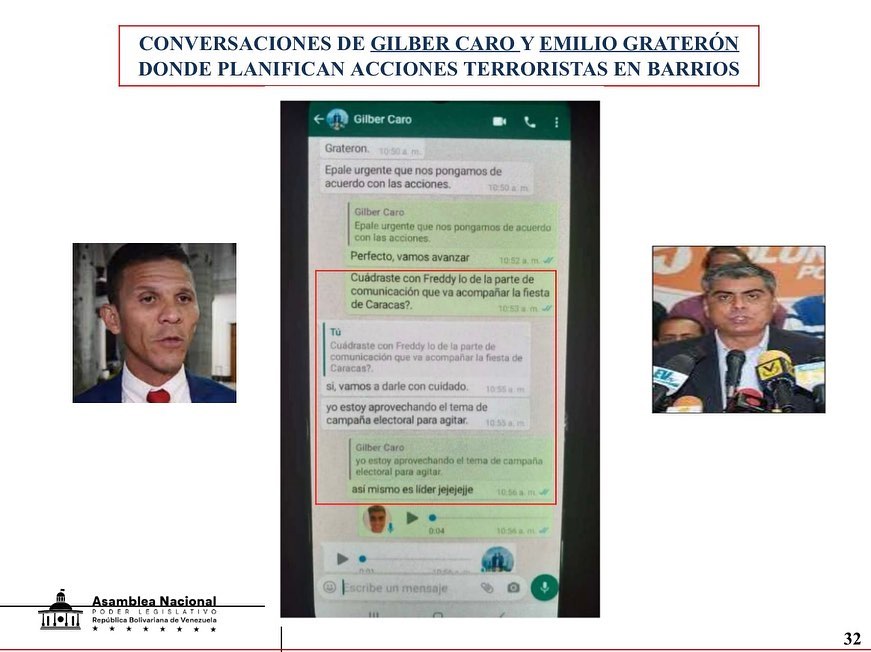 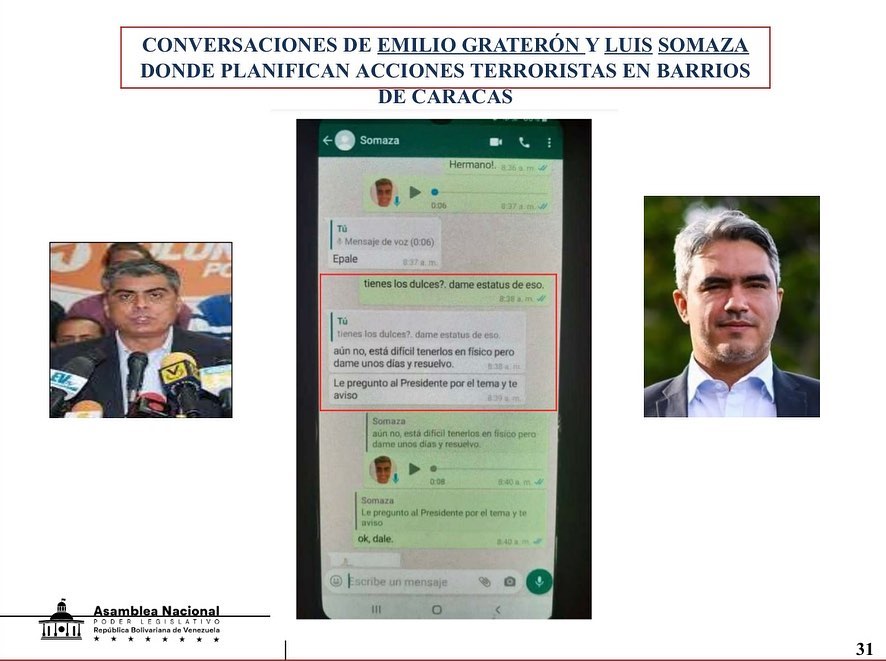