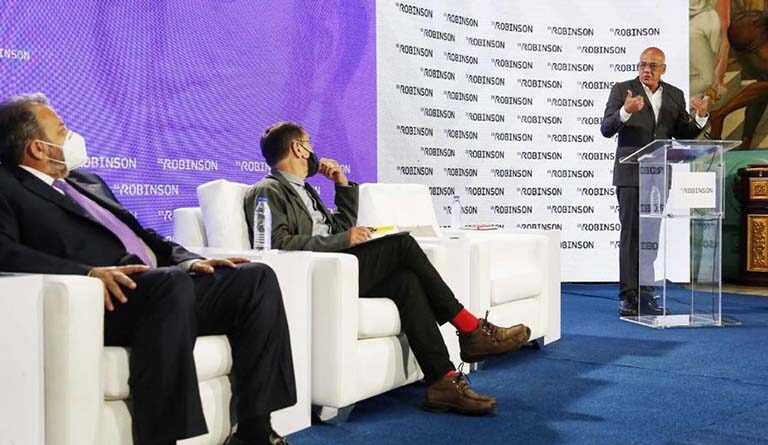 Deputy Jorge Rodríguez, president of Venezuela’s National Assembly, expressed that the political sectors of the right, which had specific weight in the early years of the 21st century, have been characterized by their historical record of violence exercised over the past 20 years since “they abandoned the constitutional and democratic political path and, instead, opted for the shortcuts of violence, aggression and fake news.” However, now the opposition sectors have been forced to resume the path of dialogue because of the defeat that the Venezuelan people and the Bolivarian Revolution have inflicted on them.

Rodríguez gave his analysis of the Venezuelan opposition during his participation in the forum Dialogue in Venezuela: Keys to a New Political Cycle, organized by the Samuel Robinson Institute, which was held in Caracas on Monday, August 23, and .

Rodríguez added that, when it came to the criminal acts that the Venezuelan right wing has perpetrated in recent years, “these expressions of violence exactly reflect the aggressions suffered by Venezuela and especially by the constitutional government of President Nicolás Maduro Moros.”

Deputy Rodríguez reminded that these opposition sectors had sprouted from the coup against Commander Hugo Chávez, the sabotage of the oil industry in 2002-2003, the assassination attempts, the violations of human rights of Venezuelans, the guarimbas, the selective political assassinations, and the requests for foreign military intervention.

In reference to the current dialogue cycle that is taking place in Mexico, under the auspices of the government of Norway and several other friendly countries, the deputy noted that despite “all that madness that they [the opposition] have unleashed for months and years, thanks to the strength of our democratic convictions and the strength of the Bolivarian Revolution, the right wing had no choice but to accept and return to democratic and constitutional rules.”

Rodríguez recalled that after the recall referendum of 2004, in which President Chávez obtained an overwhelming and unprecedented victory that endorsed his mandate by more than 20 points in the elections of August that year, Venezuela experienced a long period of peace, with a flourishing economy that widely favored all sectors of the society and especially the middle class, who generally vote for the right.

During that period, the Bolivarian government of President Chávez resisted all the sabotage and violence, making George W. Bush’s “dog-fights” futile.

After the failure of the military and media coup that overthrew Chávez for 47 hours in April 2002, Commander Chávez called for a dialogue that, in December 2003, led to the signing of an agreement with the opposition.

“And that December 2003 agreement clearly established that political and social issues among Venezuelans had to be resolved in a constitutional manner,” added Deputy Rodríguez, who is currently the Plenipotentiary Chief of the Venezuelan government delegation that is carrying out the dialogue in Mexico with a part of the Venezuelan opposition.

Rodríguez was forceful in stating that it was precisely Chávez who, back in 2003, sealed the agreement with the opposition with the phrase: “EVERYTHING within the Constitution, NOTHING outside of it.”

It was thanks to this that 25 elections of all kinds could be called and held in Venezuela: presidential, governorship, mayorship, parliamentary, legislative and municipal elections, all carried out according to the norms established in the Bolivarian Constitution.