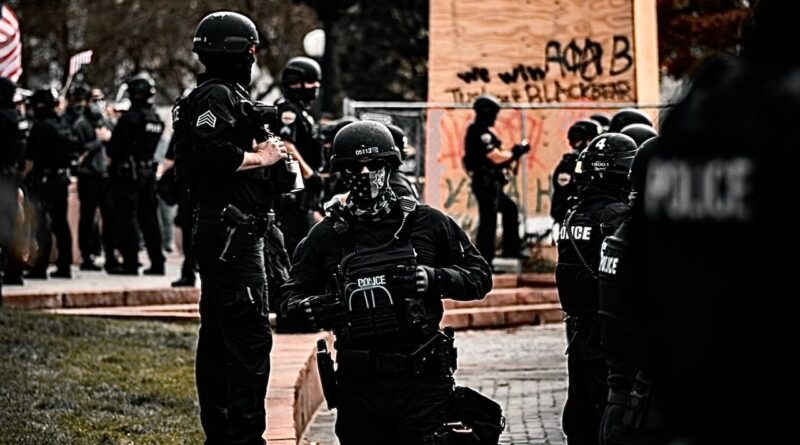 More keeps getting revealed about the contractors from the mysterious mercenary company—or, as we’ve found out, companies—that have shown up in Minneapolis during this summer’s Black Lives Matter protests. The most widely recognized of these companies, whose contractors have been reported to profile, inflict head trauma upon, grab, and surveil peaceful demonstrators, initially didn’t have its name known to the public due to the contractors refusing to reveal what their employer is called. But as I’ve seen reported by one Minneapolis resident who has personal experience with this mercenary occupation’s effects, the company’s name is Critical Response Group, or CRG.

“CRG Security is a mercenary security group currently deployed like a couple miles from my house in Minneapolis,” the resident wrote on Twitter this last week. “They are known for brutalizing locals and surveilling us.” They wrote about one podcast’s commentary on the situation that “if anything, this coverage kind of undersells how startlingly violent these dudes have been in my community. Folks getting grabbed off the sidewalk for ‘appearing to record CRG staff,’ etc etc. Absolutely wild. Like these dudes sit in a parking garage and spy on everyone with binoculars and then sometimes send out groups of like three guys to snatch someone and ziptie them until cops come and arrest the ziptied person.”

These details, despite being anecdotal, are entirely consistent with what was reported about CRG’s activities last month by public testimonies from mercenary violence victims who spoke to Unicorn Riot. Unicorn Riot posted a picture of a CRG contractor, standing in the window of a building that indeed resembled a parking garage, snapping photographs of the demonstrators while they were giving their testimonies.

I tried to speculate on what the mercenaries’ intentions were with this policy of monitoring community members, and now we know: to cultivate an environment of arbitrary detentions. One where paramilitary members regularly apprehend people who are deemed a threat, then the police go right along with these haphazard extra-legal judgments the paramilitary makes. With the constant surveillance being a way to strike paranoia into the local and keep people on their toes.

It’s an expansion of the arbitrary detentions that unidentified federal agents carried out in Portland a year ago, wherein people were randomly shoved into unmarked vehicles without any provocation for the sole purpose of terrorizing the community into not demonstrating. Except now we know that the unmarked personnel are working for a paramilitary organization with even less accountability than official police forces, and with a strategy for perpetuating the climate of intimidation and fear: surveil the population and detain those passing by even for seemingly non-political reasons.

Isn’t this almost indistinguishable from the mercenary occupations that the US empire has put in place abroad throughout the War on Terror? It brings to mind the CIA death squads that have regularly executed entire Afghan families simply for being suspected to associate with the Taliban. The only difference is that the CRG hasn’t killed anyone in Minneapolis. At least not yet, since the company’s contractors have shown they have no conflict de-escalation strategy whatsoever. It’s an environment of uncertainty, one that’s going to continue in Minneapolis indefinitely and that will be expanded into more US localities as private mercenaries take on a wider role within domestic policing.

If laws haven’t stopped mercenaries from being increasingly used abroad, nothing can stop the U.S. from subjecting its own people to these unaccountable forces. As Politics Today’s Tallha Abdulrazaq has assessed about the precedent the empire has set for mercenaries in its forever wars:

Despite numerous national laws forbidding mercenary activity in the militarily advanced Western world, mercenaries have continued to flourish and thrive in the battlefields and cities of Iraq and Afghanistan—the two countries who suffered the most from the American imperial footprint in the 21st century. With the United States now openly stating that it intends to disengage from both countries, it is likely that, rather than reduce the number of mercenaries deployed, it will instead increasingly rely on its army of private military contractors to secure its interests… The American oil giant had to evacuate its employees on several occasions, including after rocket attacks struck their compound near Basra in 2019. These compounds are guarded not by US combat troops, but by mercenaries—or, as they like to be known, private military contractors. The use of the word “contractors” is intentional as it is vague enough to cover numerous operations, whether that be training, logistics, or even the use of deadly force.

Now, just as some professional observers of Washington’s War on Terror mercenary trend predicted during the first years of the Iraq war, these same private military companies that have been used to give an extra layer of impunity for foreign US war crimes are getting unleashed upon the American population itself. Increasing use of mercenaries is a historical fixture of dying empires, so this became easy to anticipate once Washington sabotaged its own international standing by recklessly invading Afghanistan and Iraq. What perhaps wasn’t so predictable was how easily those anti-mercenary laws within the West just became discarded in Minneapolis.

RELATED CONTENT: How US Revolutionaries can Survive and Overcome the Looming Anti-Communist Extermination Campaign

It’s fitting that within weeks of the recent imperial blowback from Washington’s Afghanistan decision, wherein the sudden victory of the Taliban has discredited American military power in the eyes of the world, the empire has been turning these terror tools against its own people. It’s like an attempt to psychologically compensate for Washington’s waning influence abroad.

The fact that the Conflict Resolution Center—another mercenary army that’s been operating seemingly alongside CRG—has previously operated in imperialist intervention hotspots like Syria and Iraq supports this perception. According to a description by the Minneapolis Reformer, the CRG’s methods for providing security for a Minneapolis mall are in effect counterinsurgency tactics, with the local population being treated as the insurgents:

The Legal Rights Center—a nonprofit law firm—says it is “extremely troubled” by reports that employees of a company called Conflict Resolution Group have used “needless and excessive force on multiple occasions, causing severe injuries to innocent people.” The Legal Rights Center raised the possibility that the city of Minneapolis is coordinating with the private security contractor, recalling grim accounts of American interventions overseas in places like Iraq… Andrew Gordon, deputy director of community legal services for the Legal Rights Center, said he’s never seen an arrangement like this. “I have no experience with a city or its law enforcement effectively working in collaboration with a private security group to enforce laws in public,” he said. Gordon said based on the interactions that have been reported to him, the company is employing tactics that appear to come from military training. Gordon alleges that people were being assaulted, with police officers “standing by doing nothing” and then swooping in to complete a citizen’s arrest. If someone is hurt, victims can’t go to their city council member or the mayor or MPD—who are “seemingly divorced from this,” Gordon said.

This is the first stage of the US military’s explicitly stated plans to invade and occupy America’s urban areas in the coming years and decades. These plans are motivated by the class and anti-colonial struggles that are sure to arise from the country’s ever-growing wealth inequality, deteriorating infrastructure, expanding unemployment, systemic neoliberal failure to address the pandemic, climatically exacerbated societal dysfunction, and nonwhite community tensions with an increasingly deadly and militarized police state. Sending in the mercenaries is how the empire is normalizing the environment the military wants within these areas. An environment where civil liberties are nonexistent, where people can be detained for any reason the occupying authorities choose, and where someone is always watching.

Featured image: Riot police at a protest site in Minneapolis during the Black Lives Matter protests of 2020. File photo.