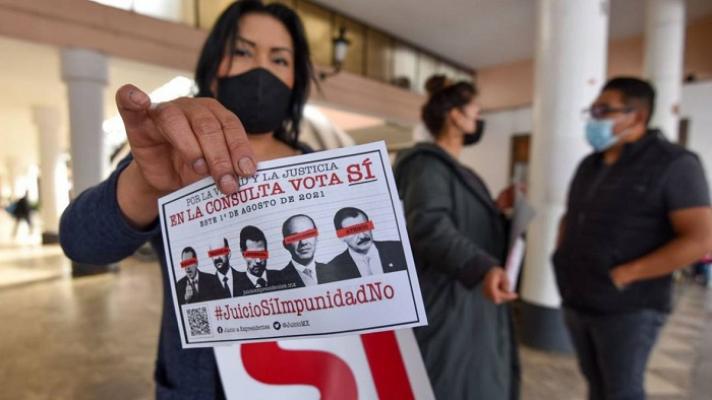 The vast majority of Mexicans who attended the popular consultation on the prosecution of former Mexican presidents on Sunday, August 1, voted “Yes,” according to preliminary results.

The popular consultation, unprecedented in the country, was convened by President Andrés Manuel López Obrador to ask Mexicans if they agreed to bring five presidents of the neoliberal era to trial for crimes of corruption committed during their mandates: Carlos Salinas de Gortari (1988-1994), Ernesto Zedillo (1994-2000), Vicente Fox (2000-2006), Felipe Calderón (2006-2012), and Enrique Peña Nieto (2012-2018).

The National Electoral Institute (INE) reported that, with 97.5% of the tally sheets tabulated, 97.7% of voters had answered “Yes” while 1.5% answered “No.”

According to an article by RT :

The campaign prior to the election was marked by complaints about the INE (Mexican electoral body). Activists campaigning for the ‘yes’ vote assured that the electoral authority minimized the importance of the consultation, discouraged participation and did not even publicize it. Similarly, they accused mainstream media of having ignored the information about the historic event—the first time that an exercise of this type was carried out in the country.

Despite the fact that the popular consultation did not achieve the necessary number of participants, the country’s legislation does not prevent the opening of investigation processes against former presidents if there are indications of their connection to crimes.

Featured image: Mexico held a popular consultation on the prosecution of former presidents linked to crimes of corruption (Photo: Cuartoscuro).