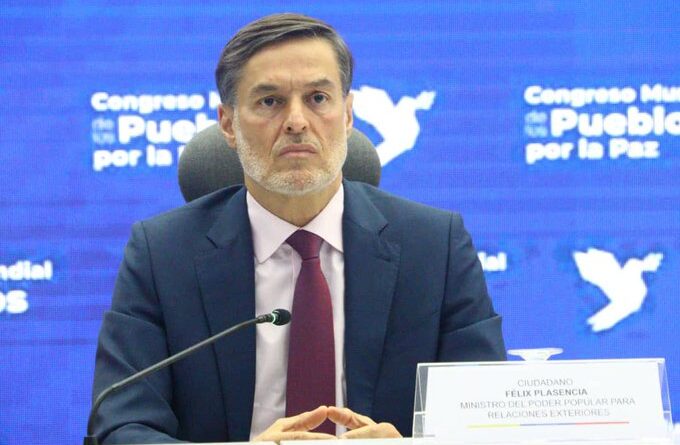 This Thursday, December 9, Venezuela’s Minister for Foreign Affairs Félix Plasencia inaugurated the World People’s Congress for Peace, which was organized to present proposals that can counteract the current challenges facing humanity and the planet in the midst of the COVID-19 pandemic.

“We met to discuss the need to deepen the guarantee of political, economic and social rights of humanity, for the welfare of the peoples,” said Venezuela’s top diplomat at the beginning of the conference, which is held online.

Plasencia stated that it is necessary to “change course” in the face of the new challenges arising in the world due to the failure of the capitalist model, which is in crisis.

“The dominant model of capital accumulation is in crisis and it has no way to resolve it, because there is no other planet that it can buy,” Plasencia said. “Our resources are depleted, our existence is endangered and we are called to change course.”

The congress will include debates on the issues of peoples’ self-determination, judicialization and repression of social struggles, feminism, Indigenous peoples, defense of the environment, political prisoners, and economic, social, and cultural rights, from the perspective of the citizen of La Patria Grande, reported the Venezuelan News Agency (AVN).

In this regard, the Chancellor referred to the situation in Venezuela as a result of the attacks by the United States, and stated that the North American nation is not fit to be a judge “that can determine what is a democracy and what is not.”

“Once again, it shows its arrogance by deciding that in a world of such diverse realities, it thinks it can become the only judge nation, that can determine what a democracy is and what is not,” said the Venezuelan foreign affairs minister.

Plasencia recalled the attack on the Capitol, on January 6 of this year, when supporters of outgoing president Donald Trump stormed the headquarters of Congress to avoid the certification of the victory of Joe Biden in the 2020 elections.

“It is a strange democracy that, at the beginning of the year, saw its own system reeling with the violent and unprecedented takeover of its capitol, but which, in addition, repeatedly violated the principles of the UN Charter,” Plasencia said.