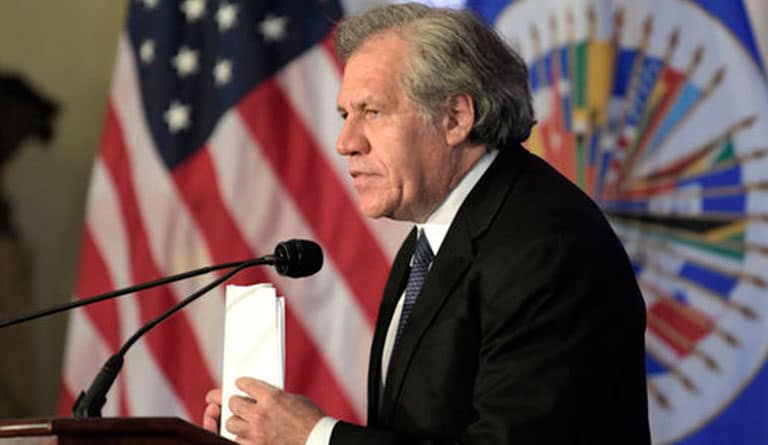 During a special virtual meeting of the Permanent Council of the Organization of American States (OAS), that brought together its 34 active member countries, the government of Bolivia reiterated its motion to initiate an investigation against Secretary General Luis Almagro and his putschist agenda.

Bolivian Foreign Affairs Minister Rogelio Mayta denounced the OAS for its renewed and unjustified attack on Bolivia, after Almagro reaffirmed, on August 9, that a fraud had taken place in the 2019 Bolivian presidential elections.

During his speech, the Bolivian foreign affairs minister warned that “if Luis Almagro’s actions are not prosecuted through institutional means,” tomorrow other countries in the region could find themselves in the same position as Bolivia: as victims of attacks and coups d’état promoted by the secretary general of the OAS.

Bolivia’s position was supported by Mexico, Argentina and Nicaragua, which not only denounced the OAS for its interference in the Bolivian electoral process, but also for its support for the now deposed Jeanine Áñez’s de facto government.

Nicaraguan ambassador to the OAS, Luis Alvarado, reiterated Nicaragua’s “firm and unwavering solidarity and support for the people and the government of Bolivia, which continues to confront the coup aggression perpetrated by the OAS Secretary General.”

REALTED CONTENT: Bolivia in the Spotlight: A New Coup in the Making?

Alvarado called “illegal and fallacious” the 2019 report presented by the OAS mission to Bolivia, which had warned of supposed “irregularities” in the Bolivian electoral process of that time.

Alvarado condemned the political instrumentalization exerted by the US Government Electoral Mission that, through its agent the OAS Secretary General, carried out the 2019 coup against the then president and candidate, Evo Morales.

For her part, Mexican ambassador to the OAS, Luz Elena Baños, raised her voice in support of the Bolivian government, criticizing Almagro for “exceeding his functions” and for “deepening the polarization” in the hemisphere.