Cuban President Miguel Diaz-Canel went to the streets of Cuba to talk directly with the people in the mist of a destabilization operation that many believe is US made. Photo Telesur.

With a tour of the streets of Cuba, President Miguel Díaz-Canel sent a message of gratitude to the revolutionaries who came out to counter the manipulations of the national and international right wing promoting acts of violence.

In this way, the president joined the campaign in defense of peace and sovereignty on the Caribbean island, which has been threatened recently by what he denounced as “counterrevolutionary elements who receive money from US agencies.”

Meanwhile, in the mainstream media and on social media networks, the usual suspects tried to disseminate fake news of an alleged mass mobilization against the Cuban government. Influencers posted images of large protests that were demonstrations in Egypt from the year 2011, claiming that they were occurring on Havana’s famed seaside roadway, the Malecón. Similarly, The Guardian and other outlets circulated Associated Press photos of demonstrators hoisting banners of Fidel Castro’s revolutionary 26th of July Movement and falsely claimed that they were “anti-government protesters.”

The disinformation on Cuba is so blatant: Pro-war, neoliberal British newspaper The Guardian used a photo of Cubans rallying with the July 26 flag (the name of the revolutionary movement founded by Fidel Castro) and falsely claimed they're "anti-government protesters"

From the town of San Antonio de los Baños, in Mayabeque, the Cuban head of state expressed that his government is concerned about ​​public dissatisfaction faced with economic difficulties and a surge in COVID-19 cases and deaths. However, he warned of sectors paid by US agencies with the aim of disturbing the peace of the Antillean nation.

Opportunism of the right
As President Díaz-Canel noted, the last few hours revealed the presence of opportunist groups that try to capitalize when people expressed any legitimate dissatisfaction. Of course, these events all occur amid the intensification of the island’s blockade by the United States government.

According to social media networks, people’s gripes arose due to the recent spike in COVID-19 cases, but most commentators failed to recognize that Cuba is among the countries in the world with the lowest COVID-19 death rate. Others pointed at electricity blackouts as the reason behind the unrest, without mentioning that Venezuela—a country that for many years sold fuel to the island—is facing an intense blockade of its own, also at the hands of the US government, making it almost impossible for Venezuela to process or purchase gasoline for itself, and thus greatly curtailing the export of fuel to Cuba.

The above problems have been addressed openly by Cuban authorities, who have informed the population about these problems that compound the effects of the illegal US blockade, in place for almost 60 years. In addition, measures put in place during the administration of disgraced US President Donald Trump led to a sharp decrease in the island’s income, due to “sanctions” on remittances. This has been exacerbated by a decrease in tourism revenue as a result of the pandemic.

Like Nicaragua and Venezuela, the Republic of Cuba is one of Latin America’s countries most heavily affected by excessive US unilateral coercive measures, restricting the nation’s ability to import food, medicine, technological equipment, and countless other items, a situation that is rendered more harmful to the island’s people by the exigencies of the pandemic. 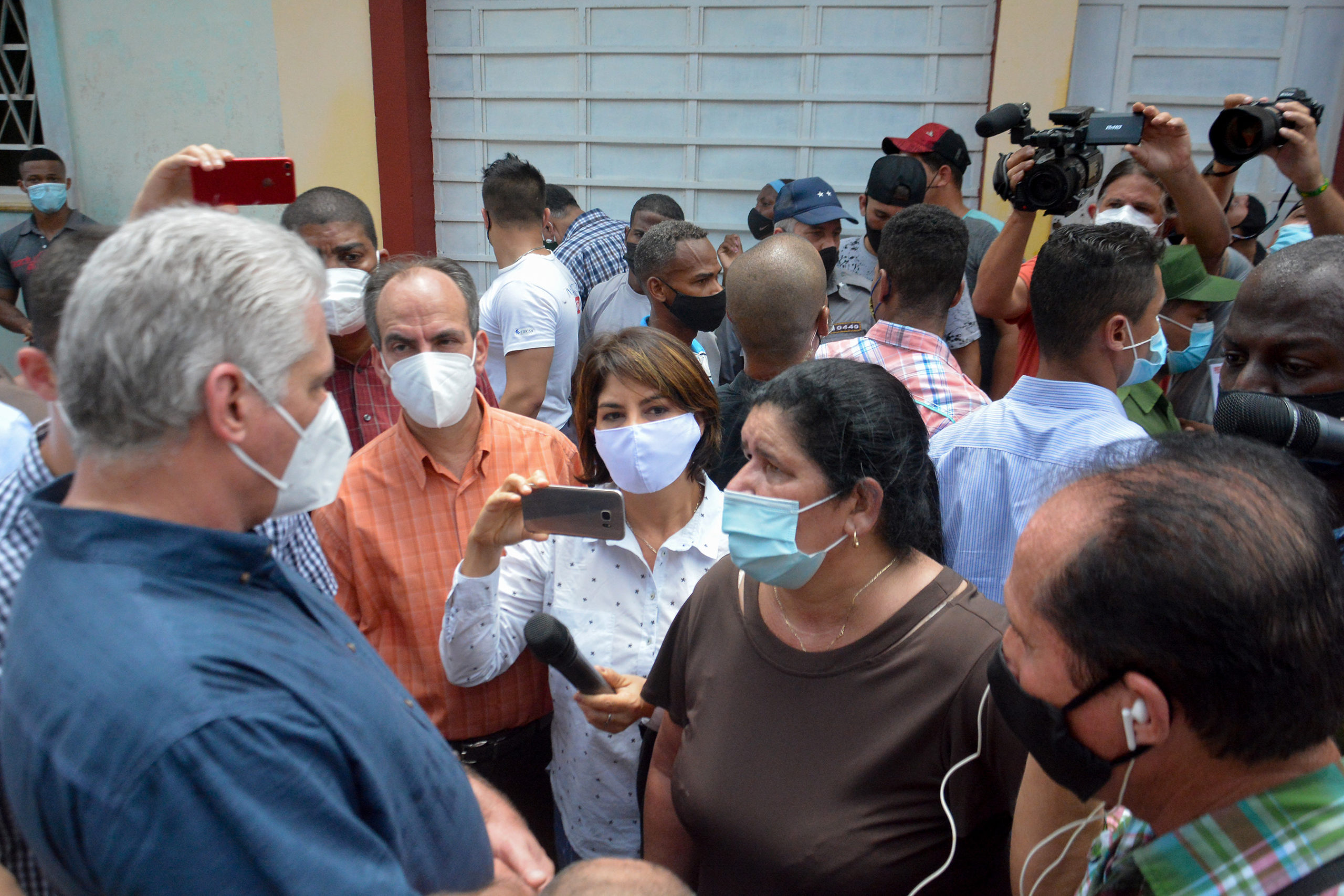 Images of the meeting of President Díaz-Canel with residents of the town of San Antonio de los Baños circulated on social networks. In that same city, right-wing groups had promoted unrest and violence during the day.

Featured image: Cuban President Miguel Diaz-Canel went into the streets of Cuba to talk directly with the people in the mist of a destabilization operation that many believe is made in the USA. Photo Telesur.