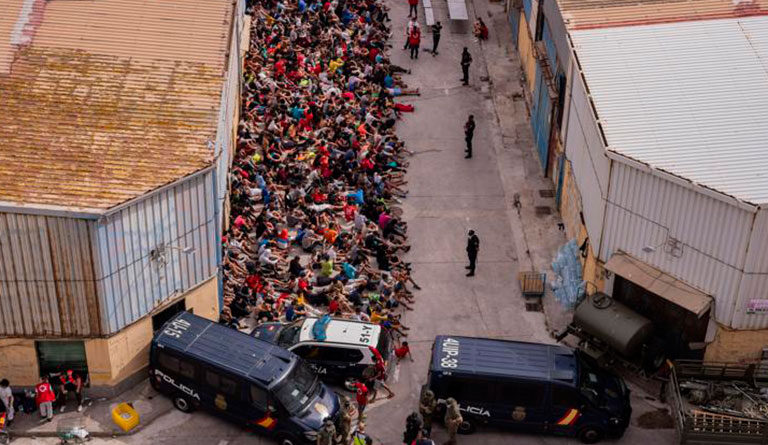 On Friday, May 20, the Saharawi independence organization Polisario Front called on the international community to pressure Morocco to stop instrumentalizing illegal immigration to push for its claim over Western Sahara.

According to an official statement by the Ministry of Foreign Affairs of the Saharawi Arab Democratic Republic, the Ministry has urgently called “on the UN, the African Union and the European Union to impose on Rabat the obligation to turn the page on its aggressive policies of drug trafficking and illegal immigration, and to abandon its shameful use of terrorism.”

This was the first official Sahrawi reaction to the ongoing crisis in the Spanish enclave of Ceuta; a crisis that began after the arrival of more than 8,000 migrants from neighboring Morocco since Monday, taking advantage of a strategic relaxation of border controls in the African country.

The current crisis has its roots in the diplomatic tensions that erupted between Madrid and Rabat since the arrival of Brahim Ghali in Spain for medical treatment last month. Ghali is the head of the Polisario Front, organization that Morocco considers as an enemy.

As Morocco is a crucial ally of the European Union in its war against immigration from Africa, the administration of the country had hoped that the EU would recognize its alleged sovereignty over Western Sahara, as did former US President Donald Trump.

The Saharawi statement considered that ”the aggressiveness of Morocco towards Spain was an immediate consequence of the international community’s rejection of Moroccan sovereignty over Western Sahara.”

“Mistakenly enough, Morocco was counting on the support of Trump’s declaration by some European Union member countries,” continued the statement, but “this could not happen because such a declaration [is] contrary to international law.”

Therefore, the Polisario Front has urged ”the United Nations, the African Union and the European Union to intensify their efforts to put an end to the illegal Moroccan occupation of parts of the territory of the Saharawi Republic.”

Being the former colonial entity in Western Sahara, Spain warned Morocco that its position would not change in regard to the issue of that vast territory.

The Polisario Front wants a self-determination referendum to be conducted by the UN in the Saharan desert nation, something that has always been postponed since the signing of a ceasefire in 1991, after 16 years of conflict.

Morocco, which illegally occupies three-quarters of the former Spanish colony, has claimed that it would grant conditional autonomy under Moroccan sovereignty to the territory it controls.

Meanwhile thousand of migrants are being mistreated in Spain with the typical white supremacy approach exercise by Europe. Something that contrast with the heavily publicized Spain interest in “defending” human rights of Venezuelan migrants.

Featured image: The migration crisis is being used by Morocco to try and legitimize its self-proclaimed sovereignty over Western Sahara. File Photo.