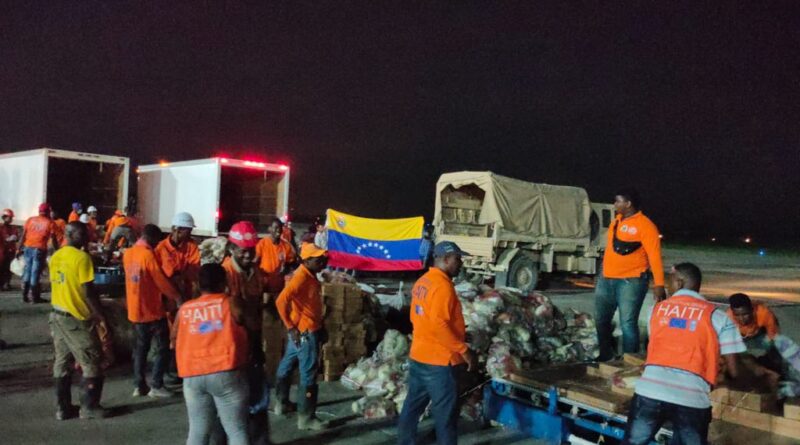 The Venezuelan government sent a second flight with humanitarian aid to Haiti on Monday, August 23, with 30 tons of various supplies to meet the basic needs of citizens affected by the 7.2 magnitude earthquake that struck the Caribbean country on August 14.

The flight left from the Simón Bolívar airport serving Caracas, with cargo that included medicine and non-perishable food. In addition, personal hygiene kits, diapers, and other desperately needed materials were also sent to the Haitian people suffering from the consequences of the earthquake.

Venezuela’s Minister of the Interior, Justice and Peace, Remigio Ceballos, emphasized that the second flight of humanitarian aid was deployed to Haiti as a gesture of love and solidarity.

“Venezuela, with a gesture of love and solidarity, lends its support to the peoples of America and the Caribbean,” said Minister Ceballos.

For his part, the director of Civil Protection, Eduardo Hurtado, affirmed that coordination between officials of both countries is key to helping the people affected by the earthquake. Hurtado added that the two nations activated all pertinent cooperation mechanisms from the moment the humanitarian bridge was established.

The Haitian authorities reported that they established humanitarian bridges so that aid that arrives from various countries and international organizations can be delivered to urban areas and to remote rural regions.

“Venezuela is here to support the Haitian people,” added Minister Ceballos. “Count on us, we will continue to send everything you need, so that in this time we can reach the elderly, children, and adults.”

This is the second flight with 30 tons of humanitarian aid sent by Venezuela. The first arrived in Haiti on August 16.

Drinking water was included in the first shipment, along with food, medicine and other items, distributed to those most affected by the earthquake, which has led to at least 2,200 deaths in Haiti to date.

Featured image: Venezuela’s second shipment with 30 tons of humanitarian aid is unloaded in Haiti. Photo courtesy of the Venezuelan Embassy in Haiti.