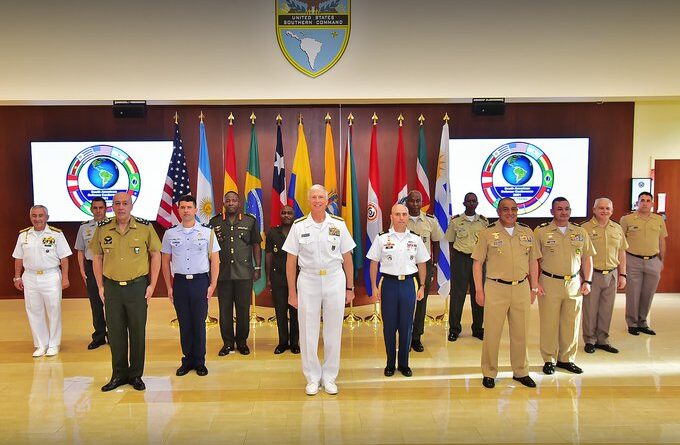 According to reports by news agency EFE, Craig Faller, head of the United States Southern Command (SOUTHCOM), said that he “fully supports a diplomatic exit” in Venezuela. Faller made the comments at the inauguration of the South American Defense Conference in Miami this Tuesday, August 17, where representatives from Argentina, Brazil, Chile, Colombia, Ecuador, Guyana, Peru, Paraguay, Suriname, and Uruguay were present. Bolivia did not participate.

Faller claimed that Venezuela’s issues are of a political and diplomatic nature, and did not pass up the opportunity to deride President Nicolás Maduro, whom he described as a “shame” and blamed for destroying Venezuela “for 25 years,” even though Maduro has only has been in power for a little over eight years. We can imagine that Faller was referring to the presidency of Maduro’s predecessor, the late Hugo Chávez.

The gringo military bureaucrat also claimed that President Maduro is harming the Venezuelan people and violating “their human rights,” while failing to mention that the greatest violator of human rights around the globe is the country Faller represents, and conveniently omitting mention of the US and European economic blockade, the primary cause of Venezuela’s economic problems.

However, Faller acknowledged that he is aware that “a lot of work is being done at the international level to reach a diplomatic solution and apply diplomatic pressure to do the right thing.”

“So it has to be a diplomatic solution and we fully support it,” added Faller. “What we focus on is how we can better share information? How can we better support each other in the region?” Analysts surmise that Faller was attempting to repair some of the damage done to the reputation of US intelligence agencies due to their recent failures in Afghanistan.

From Faller’s point of view, these supports translate into helping Colombia, since it has had a “tremendous increase in Venezuelan migrants.” Using this as a pretense, the US military uses Colombia as a base from which it carries out its violent and non-violent interventionist actions against Venezuela. Since 1989, the US has contributed hundreds of billions of dollars to arm, supply, and train Colombia’s military.

Faller assured that he seeks to “better understand the complex situation in Venezuela through intelligence and information, exchanges and training, so that they can be prepared and have a strong Army that will dissuade any conflict,” without mentioning that Venezuelans are ready to defend the Bolivarian Revolution. For this the Bolivarian Republic counts on the civil-military union comprised of more than 4.5 million citizen militia members.

In addition, EFE reported that “SOUTHCOM maintained that Venezuela is the main point of support and access in the region for ‘actors from external states,’ and allows the activities of transnational criminal organizations, and provides refuge for regional terrorist groups.” Despite the persistent narrative, no US official has backed up these recurrent accusations with any evidence.

An international analyst consulted by Orinoco Tribune told us that “Faller’s words reflect what Russian President Vladimir Putin referred to a few months ago as the ‘mirror syndrome’ embedded in US conscience, meaning that they accuse their imaginary enemies of all the crimes the US really commits.”

In the same vein, Faller, who is about to retire and will be replaced soon, insisted on the alleged negative impacts that countries such as Cuba, China, Russia and Iran have on the region. These nations, he claimed, “thrive on corruption.” With this ironic accusation he returned to the main anti-Venezuela talking points of the US smear campaign: corruption, the penetration of foreign powers (China, Russia and Iran) in the region, economic and migration crises, and human rights violations.