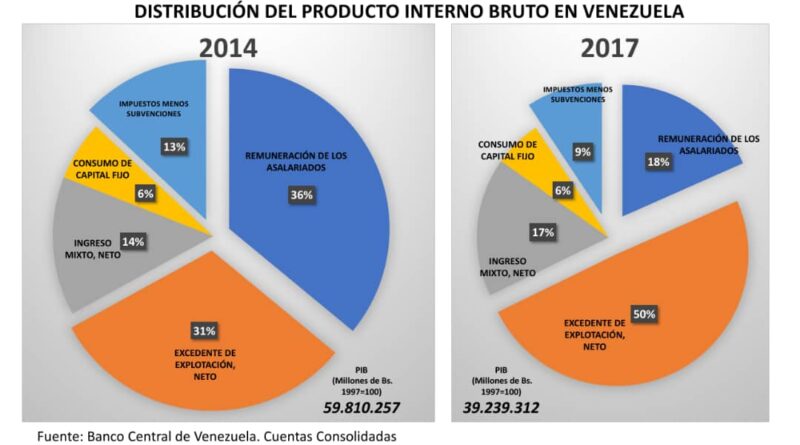 Let’s imagine a round cake, and suppose it is the Venezuelan economy. That cake represents what is produced each year in Venezuela. When the production is greater, that cake is larger; on the other hand, if less is produced, that cake is smaller. Economists measure the size of that cake with what is known as GDP.

Although it has been the salaried class that made the whole cake with its work force, others also eat it. The cake is distributed, here and in any capitalist system, between the owners of capital, those who live on wages and the State, the latter does not eat its portion, but re-distributes it. The piece comes to the bourgeois by way of profit, to the proletarian by way of wages, and to the State by way of taxes.

In 2014 the cake of the Venezuelan economy was large and was distributed as follows: 7 pieces went to the bourgeoisie, 7 to the salaried employees and 2 to the State, totaling 16 pieces. This is a pedagogical example based on BCV figures, but so that there is no room for misinterpretation and since they begin to say that we are manipulating figures, the graph that accompanies this writing shows the exact data, just as they are published in Carmelitas (BCV).

Although at first glance it shows a fair distribution, it turns out that the 7 pieces of the bourgeoisie, in turn, had to be distributed among 444,710 employers, while the 7 of the proletariat had to be distributed among 11,553,705 workers according to INE data. At that time, for every bolívar the employee received, the bourgeois appropriated 8.73. It is what Karl Marx called “real degree of exploitation.” The portion that fell to the State via taxes was not only relatively low, 13%, if we compare it with other countries that reach 40%, but also these taxes, at 86%, correspond to the VAT paid by the more than 11 million employees and the 400 thousand employers. Only 14% is income tax, which is not only paid by companies or “legal entities” including PDVSA and all state companies, but also, by the ordinary people.

At that time, that minimum portion of the cake that fell to the State (relatively small since it is a State framed in a process that is advancing towards socialism) was destined mostly to social investment, 62%, allowing it to finance the missions , health, education, transportation, electricity, water, and pensions.

As time passed, that cake became smaller and smaller. For 2017, it was 2 thirds the size of 2014, the economy fell 34% between 2014 and 2017, according to the BCV, for the reasons we have been explaining and writing about for several years now. Since 2015 we have been warning of a financial and commercial blockade that at that time was still hidden. We also warned of other weapons of economic warfare: the programmed and selective shortage of food and medicine, the attack on PDVSA and the attack on the bolivar that, by the way, is one of the most powerful weapons, the one that most affects the purchasing power of the working class by inducing inflation and the one that most affects production, however, few mention it on Carmelitas (BCV) despite the fact that it was already unveiled by the White House itself, much less the acts in consequence.

In 2017 the cake was not only smaller, but also against any reason or revolutionary rule, (read nonsense according to the Royal Spanish Academy), that cake was distributed more unevenly. The bourgeoisie got 10 pieces instead of 7, the employees 5 instead of 7 and the State 1 and not 2. In 2017, for every bolívar destined for the employee, the bourgeois appropriated 30 instead of the 8 that it pocketed in 2014.

Taking advantage of induced inflation and the lag of wages, the bourgeoisie took a bigger slice of the cake, a piece that was taken from the employees and the State. Between 2014 and 2017, prices increased 10,013% and wages barely 6,436%. The State, for its part, of course, continued to make a great effort and invested 73% of its budget in social investment, but a budget reduced in absolute terms due to the reduction of the cake and the lower collection of taxes, but also to a hyperinflation that, although induced, prevents the fulfillment of all the planned goals. To which we must add that since the Carmelitas Corner (BCV), under the monetarist dogma, has refused to increase the amount of money to finance fiscal insufficiency, believing the story that this is the cause of inflation.

In revolution and as we move towards a truly socialist model, who is supposed to pay taxes so that the State can provide better services and also pay a living wage to its workers — the worker who saw his salary drop 36% between 2014 and 2017? Or the bourgeoisie that increased the degree of exploitation by 247% during that period?

We regret that we cannot carry out these calculations until 2019, but the BCV has not published the consolidated accounts for 2018 and 2019. We do not usually speculate because this can lead to misinterpretations, they could accuse us of being manipulators, so for this reason we have limited the analysis to 2017. What is worthwhile in scientific research is to formulate a hypotheses, and ours is that this uneven distribution of the cake has been worsening since 2018 due to the fact that from 2017 to June 2020 prices increased 716,308% as a consequence of the attack on the bolivar, while nominal wages increased by only 20,102%, and the purchasing power of public and private workers, plus the public, plummeted 97%.

Is it to go against the reason and the rule of the revolutionaries to propose that this cake be distributed more equally; that the bourgeoisie not continue to take more than half the cake; that it return what it alienated to the workers in the social process of work; that wages be adjusted in the same proportion and speed of prices until they reach decent levels? Is it nonsense to demand that the bourgeoisie, which has only increased exploitation / profit / surplus value, pay taxes so that the State can strengthen itself, increase the salary of public servants and improve the provision of public services with all the margin that you have for it?

There are proposals that seek to contribute to the urgent and necessary debate that, as respectful and without insults, as good revolutionaries, we must have about wages. They are just that, ideas that aim to pave the way towards socialism, a leftist proposal that Chávez has always called us to.

We conclude this writing by congratulating our Liberator, Father of the Fatherland, Simón Bolívar on his 237th birthday. We celebrate by hugging him while we reread his poem entitled “My Delirium on Chimborazo.”