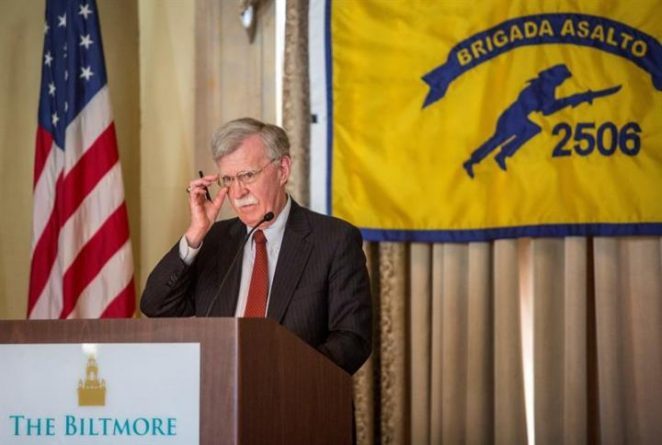 The latest sanctions are meant to limit Venezuela’s access to US dollars.

The US Treasury Department has levied sanctions against the Central Bank of Venezuela (BCV) in a bid to further isolate the Caribbean country financially.

The measure was announced by White House National Security Advisor John Bolton during a speech in Florida on the 58th anniversary of the United States’ 1961 Bay of Pigs invasion of Cuba, a failed attempt to topple the Cuban Revolution.

“[The US is] announcing new sanctions against the Central Bank of Venezuela to restrict U.S. transactions with this bank and prohibit its access to U.S. dollars. This bank has been crucial to keeping Maduro in power, including through its control of the transfer of gold for currency,” Bolton tweeted after the speech.

Financial sanctions have seen the Venezuelan government increasingly turn towards transactions in gold to obtain hard currency for vital imports of food and medicine, as well as look for convoluted mechanisms to process oil sales.

A statement from the Treasury Department added that while the measure “will inhibit most Central Bank activities […], the United States has taken steps to ensure that regular debit and credit card transactions can proceed and personal remittances and humanitarian assistance continue unabated.” No further details concerning said steps were offered. Companies that deal in foreign currencies, including exchange houses that handle remittances, are mandated to sell a fixed percentage of their foreign currency earnings to the BCV.

President Maduro slammed the latest sanctions, calling them a “desperate act” and vowing that the Central Bank would confront and overcome them.

The Venezuelan Foreign Ministry also reacted in a communique against the Trump administration’s “illegal” measures.

“This renewed attack is directed against the Venezuelan people, threatening their peace and stability,” the statement added.

The Trump administration also imposed unilateral measures against Cuba and Nicaragua on Wednesday. Along with Venezuela, they were called the “troika of tyranny” by Bolton. Nicaragua saw sanctions imposed on its BanCorp bank while Cuba, more significantly, saw the suspension of Act III of the 1996 Helms-Burton Act lifted beginning May 2. This will allow US citizens to bring lawsuits against foreign business involved in any properties nationalized by the Cuban government following the 1959 revolution.

Likewise on Wednesday, Reuters reported that Spanish oil company Repsol was suspending a swap agreement with Venezuelan state oil company PDVSA, which had Repsol supply fuel in exchange for Venezuelan crude. Swap agreements have become increasingly common for PDVSA in light of US sanctions. The US oil embargo has also limited Venezuela’s access to products needed to refine its crude and produce fuel.

However, Repsol denied on Thursday that there had been any suspension of activities, with spokesman Kristian Rix telling press that “operations are continuing normally.”

US Special Envoy for Venezuela Elliott Abrams recently visited Portugal and Spain, and Repsol’s operations in Venezuela were one of the topics on the agenda. US officials have, on multiple occasions, raised the possibility of imposing secondary sanctions against non-US companies that deal with Venezuela and PDVSA.

Abrams is known for his leading role in the Reagan administration’s Central America policy, including the Iran-Contra scandal, and later for advising George W. Bush in the lead up to the Iraq War.

Wednesday’s announcements follow an escalation of sanctions in the wake of Juan Guaido’s self-proclamation as “interim president” on January 23. The Treasury Department has targeted government officials and sanctioned Venezuela’s oil, mining and banking sectors. Venezuelan assets have also been frozen, notably PDVSA’s US subsidiary Citgo and over US $1.2 billion worth of gold held in the vaults of the Bank of England. Recent measures have also marked vessels as “blocked property” so as to make oil shipments more difficult.

US sanctions have led to increasing international opposition, with many experts warning that the measures are exacerbating the current crisis by depriving the cash-strapped Venezuelan state of resources and imposing hurdles on transactions such as food and medicine imports. Sanctions have contributed to a sharp decline in Venezuela’s oil output and also exacerbated the recent electricity crisis.

UN Special Rapporteur Idriss Jazairy has criticized the use of sanctions to promote regime change in Venezuela, while former UN Expert Alfred de Zayas likened sanctions to “medieval sieges,” designed to bring countries “to their knees.”

The Venezuelan government has repeatedly denounced the effects of sanctions on its ability to import medicines. Both the United Nations and the International Federation of the Red Cross (IFRC) recently announced an increase in their operations in Venezuela.

On Tuesday a 24 tonne Red Cross shipment arrived in Caracas’ Maiquetia airport. The delivery was comprised of medicines and electrical generators to be distributed around the country’s hospitals and clinics in coordination with Venezuela’s Health Ministry.