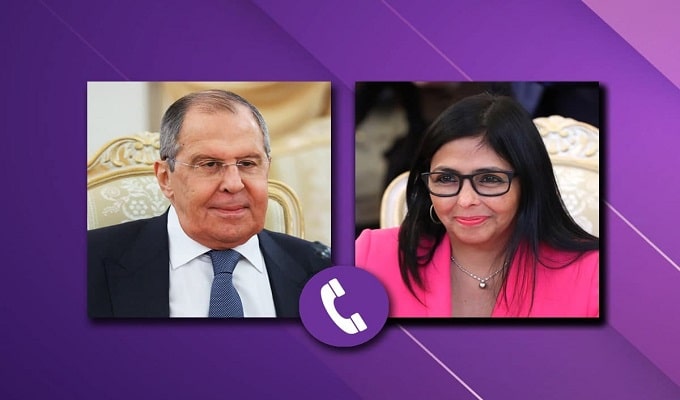 The Executive Vice President of the Bolivarian Republic of Venezuela, Delcy Rodríguez, and the Minister of Foreign Affairs of the Russian Federation, Sergey Lavrov, discussed various issues of their bilateral and international agenda, the pandemic, as well as the dialogue process begun between the Bolivarian Government and the opposition, during a telephone conversation held this Wednesday, August 18.

The Russian Foreign Affairs Minister confirmed the willingness of his government to contribute to an inclusive solution to the Venezuelan conflict, respecting the principles of sovereignty and non-interference in the internal affairs of the Bolivarian nation.

For her part, Rodríguez, through her Twitter account @delcyrodriguezv, thanked “Foreign Minister Sergey Lavrov for the telephone conversation in which they reviewed bilateral cooperation and international relations. I thanked him, on behalf of the President of the Republic, Nicolás Maduro, and the people of Venezuela, for the support of Russia in our country’s fight against COVID-19.”

Likewise, in another tweet she wrote: “I was also grateful for Russia’s support in the dialogue process between the Venezuelan government and the extremist opposition. We reaffirm the will of our countries to continue strengthening our strategic relationship for the sake of the happiness of our peoples.”

At the beginning of this year the Bolivarian Republic of Venezuela and the Russian Federation celebrated the 76th anniversary of their establishment of diplomatic relations. During this time, both nations have strengthened their friendship and bilateral cooperation agreements, particularly since the arrival of Commander Hugo Chávez and the Bolivarian Revolution, which has permitted an increase in commercial exchange for the benefit of both peoples.

The two nations have signed various agreements in areas such as health, economy, culture, and the military, among others, while sharing the same geopolitical vision. They continue to work together to face the COVID-19 pandemic.