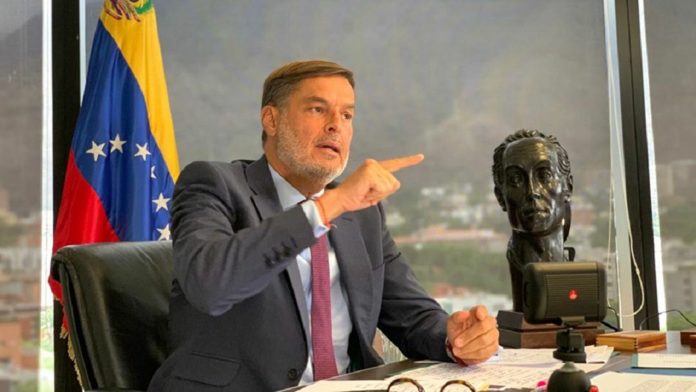 The Foreign Affairs Minister of the Bolivarian Republic of Venezuela, Félix Plasencia, took a stand against recent statements by the Colombian Foreign Ministry in which it made clear its support for the destabilizing actions of Juan Guaidó and his entourage.

“The Bolivarian Republic of Venezuela expresses its repudiation of the statements made by the official account of the Colombian Foreign Ministry, of complicit support for those who have dedicated themselves to the plundering of the assets of all Venezuelans,” Plasencia stated on February 5.

Plasencia denounced the “criminal nature of the Colombian narco-government,” evidenced in its sponsorship of terrorist activities and looting of Venezuela’s assets located in Colombian territory, including the Monómeros concern, among others.

This recent spat between the two nations occurs in the midst of the popularity crisis of Juan Guaidó, following the defeat of the opposition’s recall referendum. The opposition failed to collect a sufficient number of signatures required to move the initiative forward.

On the other hand, the verbal clash fits nicely with the agenda of the Colombian presidential campaign, in which attacks on Venezuela play a central role, in an attempt to weaken the voting intentions of the left.

Statement from Colombia
The statements were issued on Twitter by Colombia’s Foreign Ministry on February 4, the day that Venezuelans mobilized to celebrate Chavismo on the 30-year anniversary of the civil-military rebellion against neoliberalism led by Commander Hugo Chávez.

“We reject all threats and actions that the Maduro regime has announced against members of the democratic forces of Venezuela, especially against interim President Juan Guaido,” wrote Colombia’s Foreign Ministry.

In the Twitter thread, through a series of slurs against Venezuela, platitudes, and unproven claims, Colombia’s Foreign Ministry clearly expressed the Duque administration’s willingness to continue its attacks against the Venezuelan people until the very last day of his mandate, which expires in August 2022. Duque is ineligible to run for office again, as Colombia’s presidents are currently limited to one term.