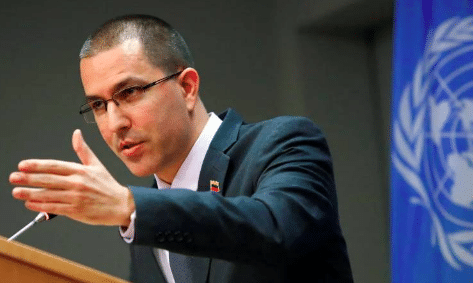 This document is typical of the infamous organization Human Rights Watch (HRW), based in New York City, which has been accused of acting as an agent for destabilization at the service of Washington. In 2010 financier George Soros gave $100 million to HRW.

Arreaza confronted the alleged activist: “You are nothing more than an agent,” said Arreaza, and invited him to read a recent report from the investigative journalism outlet Misión Verdad that broke down what he describes as “fallacies and interference in the case of Apure.”

RELATED CONTENT: Padrino López: The Violence They Intend to Sow in Venezuela Has its Spokesperson in the US

The Human Rights Watch account includes a video on José Manuel Vivanco’s Twitter profile, a 3:55 min. review of testimonies that purportedly give an account of alleged violence by the National Bolivarian Armed Force (FANB) against the civilian population.

Coalition of lies
The descriptions align with the interests of the Colombian government, foreign media, paramilitary groups, and enemies of Venezuela, and claim that the FANB’s actions defending the region have resulted in alleged violence, arbitrary detentions, looting of properties, burning of crops, torture of pregnant women, and false positives.

Arreaza warned from his Twitter profile that the report of the questionable human rights organization coincides suspiciously with an item published this week by The New York Times that described Venezuela as a territory in chaos, lacking the rule of government, and deeply penetrated by Colombian paramilitary groups.

The chancellor stressed that the US newspaper and HRW “seek once again to increase the pressure for intervention.”

Vivanco responded to the message by dismissing the arguments of the head of national diplomacy as a display of epithets and conspiracy theories.

For the director of HRW, the accusation of a concerted media campaign, or a fifth-generation war operation (a war of perceptions and information) against Venezuela, is simply “absurd.” Vivanco dismissed the reams of evidence suggesting bias on the part of Human Rights Watch.

“Human Rights Watch has been a key player in the manufacture of propaganda for war and foreign intervention,” wrote Tim Anderson and Mazen al-Akhras in 2014. “It gets most of its funds from a variety of US foundations, in turn funded by many of the biggest US corporations… The group is tightly linked to the US Council on Foreign Relations (CFR), a virtual ‘Who’s Who’ of the US foreign policy elite. HRW has ‘soft-pedalled’ on US-compliant regimes such as Colombia, the worst human rights abuser in Latin America as shown by the murder of trade unionists, journalists and other social activists. By contrast, HRW repeatedly attacked the government of the late Hugo Chávez in Venezuela. The group has always had a political agenda.”

Arreaza once again exposed the questionable intentions of the human rights report, which he categorized as an irresponsible atrocity to promote foreign intervention in Venezuela. Additionally, he clarified to Vivanco that the situation in Apure is the opposite of what his report relates: it is the FANB that is “confronting the criminals, violent actors, drug traffickers, and the violators of human rights that you defend.”