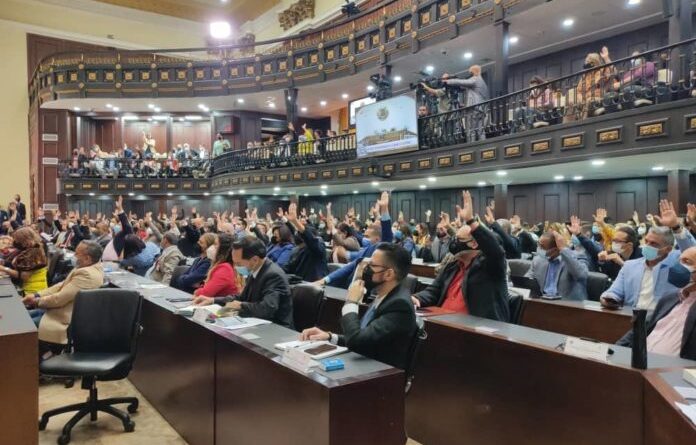 With the goal of consolidating the Venezuelan judicial system as an instrument at the service of the people, in its first discussion of the issue the National Assembly approved the partial reform project of the Organic Law of the Supreme Court of Justice (TSJ), a proposal presented on December 22 by the president of the TSJ, Maikel Moreno.

During the session that took place this Thursday, December 30, in the last legislative meeting of 2021, the President of Parliament, Jorge Rodríguez, led the debate from which the approval by a qualified majority emerged.

In recent weeks, members of the Venezuelan Parliament expressed their vision for strengthening the functions of the TSJ, with the aim of protecting the rights of the people, beyond any social condition, political preference, or economic status.

In this regard, PSUV deputy Diosdado Cabello highlighted the importance of defining the procedures followed by the Supreme Court and the appointment of new magistrates, for which he asked the opposition legislators to present their proposals and concerns before the internal policy commission. He explained that the main goals of the reform are:

• Decrease the number of Magistrates of the Supreme Court in order to strengthen their efficiency and effectiveness in the administration of Justice.

• Appointment of the new Magistrates and their respective alternates by the National Assembly, approval of the method allows magistrates to be appointed by simple majority.

• Strengthen the autonomy and appointment procedure of the Judicial Nominations Committee, increasing from five to 10 the number of people nominated by sectors of civil society, in view of the criticisms about the composition of the Committee, which should be made up exclusively by sectors of civil society. In this sense, it is intended to increase the proportional representation of these sectors to respond to this observation.

“Let’s take advantage of this debate to make the pertinent modifications so that Venezuela can have a judicial power according to the new times, according to the current situation,” said Cabello.

On the other hand, he recalled that the deputies of the AN visit the judicial detention centers, where they receive the opinions of citizens processed. He added that this process gave rise to the need to reform the Law of the Supreme Court of Justice.

Constant review
Likewise, Deputy Diosdado Cabello expressed his desire that the opposition group does not intend to torpedo the Parliamentary approval of an initiative requested by the popular bases, the personnel of prisons, and people who are being prosecuted.

“To agree with this is to push for a real reform project,” Cabello said. “We want to see you in the discussions and in the effective proposals so that this law reaches where it has to reach, without compromises of any kind.”

He recalled that the initial proposal came from the Venezuelan head of state himself, Nicolás Maduro, who decided to propose the reform of the TSJ Law before the AN, in strict adherence with the principles determined by the Constitution of the Bolivarian Republic of Venezuela.

“We want there to be justice—not for justice to have a price—because justice must be exactly the same for all Venezuelans,” Cabello stated.