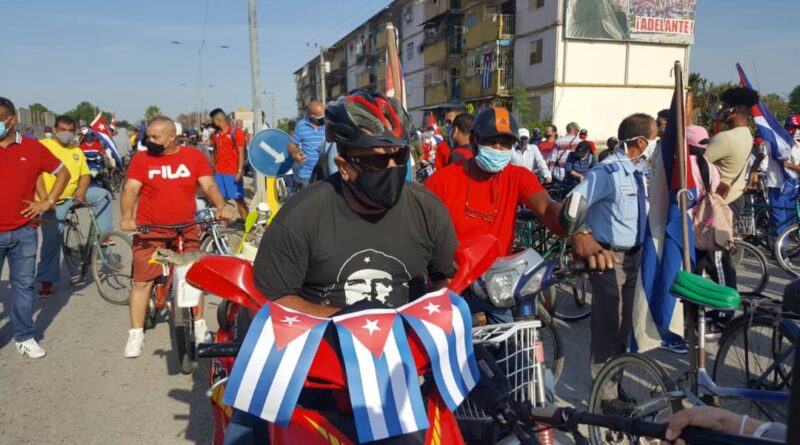 This Sunday, organizations and activists in more than 50 countries joined demonstrations demanding the United States lift its blockade against Cuba.

In large cities of countries from Europe to Asia, caravans of cars, bicycles, and other vehicles took to the streets in rallies held to demand the President of the United States, Joe Biden, to repeal the sanctions, lift the blockade, reopen Washington’s embassy in Havana, and restore the Cuban family reunification program.

The participants in this day of solidarity with Cuba—entitled Bridges of Love, publicized the cruel impact of more than 240 new measures imposed by the Donald Trump Administration which intensified the economic, commercial, and financial blockade imposed by the United States on the island for almost 60 years.

In this regard, the president of Cuba, Miguel Díaz-Canel, referred to the global demonstrations as “an unstoppable wave,” highlighting their occurrence in the midst of the COVID-19 pandemic.

“Today there are thousands, tomorrow there will be millions, and one day it will be all of humanity,” wrote the Cuban president. “There is no crime that lasts 100 years, nor is there a sovereign people that agrees to submit.”

Washington continues with its attacks against the Cuban economy, despite the fact that several organizations, including the United Nations (UN), have expressed concern about the negative impact of the US economic blockade against Cuba.

On June 23, Cuba will present a resolution to the United Nations General Assembly demanding an end to Washington’s cruel policy. The passing of an annual resolution condemning the blockade is somewhat of a UN ritual. In 2019, member nations voted 187-3 against the US policy, the 28th consecutive year at which the UN ratified Cuba’s resolution. Only the US, Israel, and Brazil vote against. In 2020 Cuba postponed the resolution due to the pandemic.

According to Cuban authorities, six decades of US “sanctions,” in violation of international law, have caused incalculable humanitarian damage to Cuba’s people and economic damages amounting to over $144 billion.

Featured image: Global day of action against US blockade on Cuba. Photo courtesy of HispanTV.