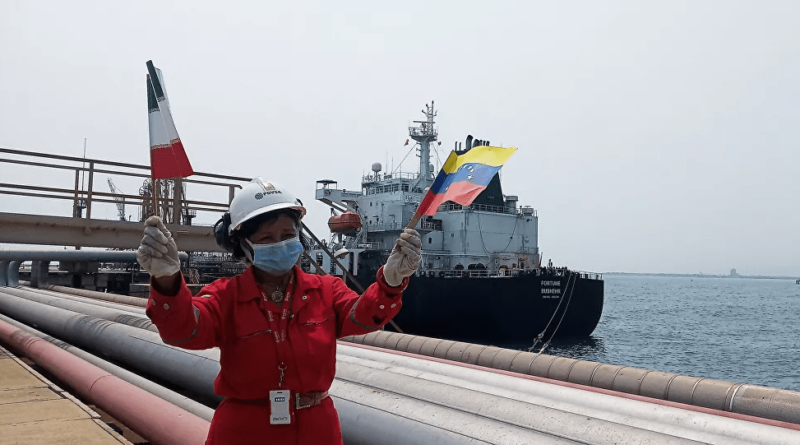 In the messages that the Foreign Affairs Minister posted on Twitter, he points out that the Iranian ship called the Honey, “sailed to the country without a name so as not to be identified,” evading the naval blockade that the US intends to impose on Venezuela.

Arreaza cited a message issued by the independent online service for maritime activities, TankerTrackers.com, which confirmed the arrival of the Iranian VLCC-type supertanker.

RELATED CONTENT:Iranian Tanker with 300,000 Barrels of Gasoline on its Way to Venezuela (Reuters)

Iranian VLCC supertanker carrying 2 million barrels of gas condensate suddenly pops up at the José Terminal, Venezuela. Most likely sailed all the way around southern Africa given her transponder was switched off. Name & IMO number has been painted over. Goes by new name: HONEY pic.twitter.com/ELbZYrObCM

“Most likely it sailed all around southern Africa since its transponder was off. The name and the IMO number have been painted over,” reported the tracking service.

Currently, the South American country suffers from a severe gasoline shortage that affects millions of people and the economy in general. The Venezuelan government accuses the US of preventing the proper functioning of the Venezuelan oil industry due to its blockade and US illegal sanctions.

Caracas has claimed that it is the victim of “criminal international financial persecution” and has said that the United States intends to impose a naval blockade on its borders with the Caribbean Sea.

US authorities have confirmed this, by offering statements in the voices of different White House and SouthCom spokesmen, who have publicly said that they would prevent the arrival of gasoline and supplies that the oil industry requires for its recovery.

Likewise, ship tracking services reported that Iran has sent, in the past days, three new tanker shipments full of gasoline that are currently in southern Africa, following a different route than the usual one and carrying approximately 131 million liters of gasoline.

Since March this year millions of Venezuelans have been affected by gasoline shortages directly related to the US regime, in collusion with extreme right anti-Chavista leadership, working together to besiege the Venezuelan population, thinking that it will bring about their so long awaited regime change.