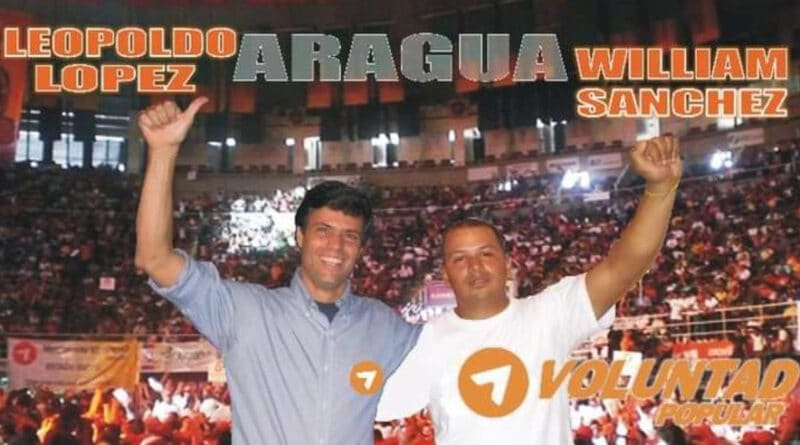 A few hours after the authorities thwarted the latest terrorist attack, which was planned by the far-right and targeted buildings belonging to the National Electoral Council (CNE) in Mariches, in the state of Miranda, it became clear who was behind the violent plot.

Once the Vice President of Citizen Security, Remigio Ceballos Ichaso, had formally denounced the attack, the government of the Bolivarian Republic of Venezuela announced that it would request the extradition of William Ricardo Sánchez Ramos, otherwise known as “Antorcha” [“Torch”], identified as the intellectual author of the plot, and currently residing in Spain.

Amongst the connections to the attack evidenced by his social media activity alone, Sánchez Ramos’ relationship with Leopoldo López is noteworthy, as López has also been living under the protection of the Spanish state ever since he fled Venezuela in order to avoid being prosecuted.

Furthermore, it is known that “Antorcha” is 41 years old and that he was expelled from the Scientific, Penal, and Criminal Investigation Service Corps in 2010 as a result of extortion charges.

Captured terrorists
A number of terrorists who attempted to execute the failed plot in Mariches against the infrastructure of the CNE, were detained. Amongst them are Dimas Alberto González González, alias “Sepulturero” [“Undertaker”], the national coordinator of the operation; José Miguel Acuña Justo, Francisco Daniel Moya Hernández, and Keyner Osnaldo Gutiérrez.

According to information provided this weekend by Minister Remigios Ceballos Ichaso, the four individuals were carrying explosives, combustibles, and several dozen pamphlets related to the operation dubbed “Continent America 2020.”

The investigation is still underway, however preliminary findings indicate that the attackers are part of the same group that plotted against the parliamentary elections in December of 2020, and against the Federal Legislative Palace in January of the same year.

Similarly, it has been determined that other members of the national and international far-right, such as Iván Simonovis, President of Columbia Iván Duque, and Ex-President of Columbia Álvaro Uribe Vélez, are responsible for the funding of these acts which aim to destabilize Venezuela.