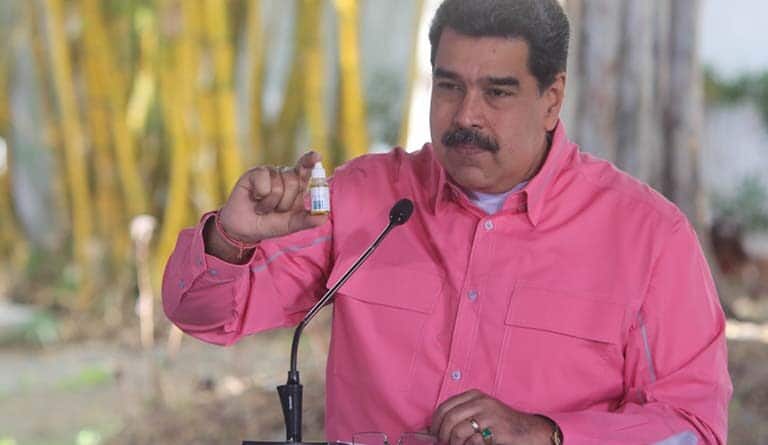 “A campaign of hatred and of lies has been unleashed on Carvativir—what pettiness, and selfishness against Venezuela and Venezuelan scientists… Worst of all is that there are people in Venezuela who add to the selfishness and evil,” said Maduro during Sunday’s update on cases and measures by the Presidential Commission for the Control and Prevention of COVID-19.

From the Casona Cultural Aquiles Nazoa, Maduro stressed that Carvativir helps neutralize the coronavirus cell. “We’re going to defend the rights of our scientists, so that they can show their capabilities.”

“The pettiness against Venezuelan scientists is impressive, and the worst thing is that there are people in Venezuela who join in with denial, evil and jealousy,” said Maduro. “On the subject of Carvativir, holy God. How much has been said on radio and television, in how many articles the demons of the selfish, unhealthy and evil were unleashed!” he stressed, reflecting on the systematic campaign to discredit the antiviral’s effectiveness against COVID-19.

He warned that the curious attempt to deny the effectiveness of a simple Venezuelan drug includes the international media and social media corporations, which have deleted and censored any video or explanation that the President has given in recent days, as a strategy to prevent the world from being informed on the subject. Similar censorship has not been applied to information about medicines, experiments or medical products, particularly those produced by multinational pharmaceutical corporations.

Maduro commented that all the scientific steps were completed to certify the effectiveness of the drug, and presented testimonies from the Venezuelan scientific professionals who did the trials. He showed in detail that critical scientists used the credentials conferred by their diplomas alone to speak ill of Carvativir without having reviewed, or even requested, the corresponding studies providing evidence for the antiviral’s benefits.

“Today we speak with the pure and simple scientific truth, proven, with love, always with science and love,” he said, thanking the IVIC scientists and other organizations for their work in the fight against COVID-19.

“With respect to Carvativir, there are several stages of the scientific study that have been completed,” said Maduro.

The Head of State stressed that in the next few days the Carvativir studies will appear in international scientific publications. “For nine months, all the necessary steps have been completed and Venezuela should be proud of all its scientists,” he added.

The dignitary said that Venezuela’s success in combating the COVID-19 pandemic is the result of the efforts of the Venezuelan scientific community, the Popular Power, and due to the support of the medical brigades of Cuba and other allied countries.

In relation to Maduro’s statement, Orinoco Tribune editor Jesus Rodriguez-Espinoza confirmed that the most recent official announcement—posted by Venezuela’s Orinoco Tribune on January 26—by the president on the subject Carvativir, was blocked by Facebook, alleging a violation on their community standards. “This never happens when they allow COVID-19 vaccines by Pfizer and Astra-Zenaca/Moderna to publicize their products with the goal of increasing the revenues of big pharma, and never thinking of the people,” added Rodriguez-Espinoza.