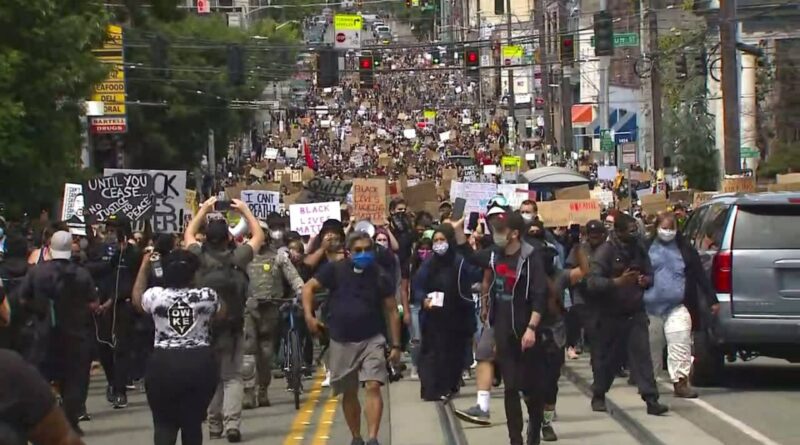 An off-duty policewoman who drove through a protest on July 4th is reportedly no longer employed by the Seattle Police Department. Two days prior, a group of protesters reported that the same blue sedan was spotted as the officer yelled hate speech at the protesters while circling the protest. Police reported that the officer had attempted to drive through an opening in the crowd, but protesters surrounded the vehicle. Police have not said if the policewoman in question quit or was fired.

Twelve parties have filed notice of claims against the city of Seattle, King County, and Washington state related to excessive force during the Seattle protests. This is a required step prior to filing a lawsuit against governmental entities in Washington state.

Among the claims, Armand Avery has filed claims on behalf of his son and himself. Both were sprayed with mace at May 30th during a protest and the video of the sprayed child went viral.

The family of Summer Taylor killed on I-5 by a white Jaguar has also filed claims against King County. They specifically include claims against King County sherriff’s deputy Mike Brown who shared an image of a car sticker portraying people getting run over by a vehicle with the caption “All lives splatter.” Other officers or officials who liked or shared similar images are also being investigated.

RELATED CONTENT: All Eyes Need to be on CHOP Now

Daniel Gregory, who was shot in the arm on June 7th trying to neutralize another car attack, also filed a claim. Black Lives Matter activists estimate that there have been at least 68 vehicular assaults on BLM protesters nationwide, with at least 18 of them so far confirmed as intentional attacks.

Malichi Howell filed a claim after they were hit in the hand with a tear gas canister which partially amputated their thumb and forefinger.

Jenna Kinyon, who was hit in the stomach with a rubber bullet and was later dragged into police lines and knocked unconscious, also filed a claim.

John William Kelleher filed a claim after allegedly being jumped on, had his arm around his neck, and was arrested after he accidentally brushed up against an officer.

Jordan Pickett filed a claim after claiming he was hit with a baton round while gathering information for University of Washington’s newspaper.

Daniel Pierce and Joey Weiser filed similar claims in regards to the police’s use of chemical weapons and force.

Gillian Williams claims to have suffered bone contusions as well as nerve and muscle damage from a police projectile during June 7th protests.

None of the governmental units have commented on these claims saying they do not comment on pending lawsuits.

Police chief Carmen Best and Mayor Jenny Durkan have claimed that a 50% budget cut would cause the department to be unable to function. As a comment, this claim appears to be the result of calculating the 50% cut to the entire year’s budget when the year is already more than half over. Reform advocates have clarified that it is a 50% cut going forward, which would mean about a 25% cut for 2020 if the cut were adopted immediately.

Police have been calling 50% cuts “catastrophic” and claiming that it means over 50% of officers would have to be laid off, primarily younger Black and Indigenous people of color. Reform activists say they are unsurprised by the police making this threat, and insist that they have thought the issues through and will propose a realistic budget before long that shifts responsibilities away from the police, saving the police department a considerable amount of money.